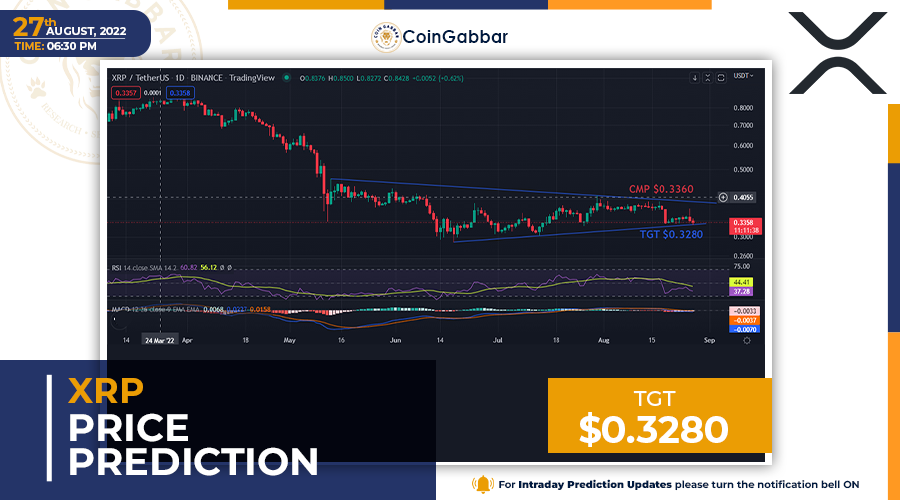 After dropping below the $0.37 price level, the XRP price has been under further selling pressure.

The cryptocurrency has been consolidating over the previous week, and it has lost 0.71% of its market value in the last 24 hours. The price of XRP has dropped by about 8% in the previous seven days.

Given how long XRP has traded below its immediate resistance level, buyer confidence has started to fade. Given Bitcoin's slide to $20,800 at press time, broader market weakness has also set it. The technical outlook for Cardano (ADA) has turned negative, as seen by the market's large number of sellers.

According to price analysis, Selling strength has taken over the chart due to a lack of interest in XRP. The cryptocurrency was trading at its closest support level. Price activity might continue to push the XRP price to the next support line. In order for the bulls to return, demand for XRP must increase in the next trading sessions.

At the time of writing, the cryptocurrency was trading for $0.3350. Because XRP was trading so close to the nearest support level, it may eventually fail to defend the $0.34 support line. The next level of support for the currency was $0.31.

The upper resistance for XRP was $0.37, and the bulls were rejected from that price just a few trading sessions ago. If XRP continues to fall below $0.33, this may return to $0.29 in the upcoming trading sessions. The trading volume of XRP increased on the chart, indicating that selling pressure has increased.

Get regular crypto updates on :- https://www.coingabbar.com/en/crypto-news-english