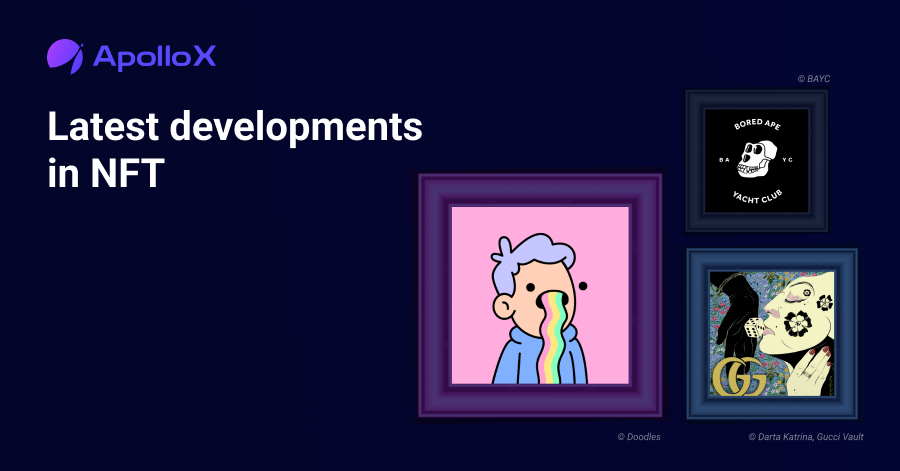 The bear market has not only affected crypto but also NFTs. NFT trading volume has declined steeply and the floor price of popular NFT collections have dropped. The biggest NFT marketplace, OpenSea, saw its daily trading volume drop below US$1 million on June 25, as compared to US$405.7 million at its peak in early May 2021. Blue-chip NFTs like Bored Ape Yacht Club and Otherdeed have dropped around 32% and 33%, respectively.

Despite the overall slack of the market, NFT platforms and projects seem to be gaining increasing adoption and prominence. Below are the latest developments in the past few months.

In June this year, traditional e-commerce company eBay bought NFT marketplace KnownOrigin. While it started selling NFTs in 2021, this acquisition marked eBay’s commitment to its participation in Web3 and could mean an NFT integration on eBay’s platform for improved NFT trading.
Credits: eBay, NFTs for sale

It’s not only traditional companies who are acquiring NFT platforms. In April, OpenSea bought Gem, an NFT aggregator, to cater to its more experienced NFT traders. Currently, OpenSea users can only buy NFTs listed on OpenSea. With this integration, Gem could allow users to buy multiple NFTs across marketplaces in a single transaction. Gem also claims to help users save on gas fees and is popularly used for “sweeping the floor”— which refers to buying several NFTs at floor price.
Similarly, Uniswap Labs acquired NFT aggregation platform Genie in June to open a suite of NFT services to users on Uniswap, the biggest decentralized exchange on Ethereum. Genie will let users purchase multiple NFTs in one transaction, and utilize aggregation tools to see listings on rival marketplaces. NFTs will also be added to developers’ APIs and widgets.
Credits: Gem and Genie, NFT aggregators

Tapping into celebrities and their fanbases

Recently, Doodles (currently the top 6th NFT collection on OpenSea) announced that musician Pharrell Williams will join as Chief Brand Officer. Williams will reportedly lead the collection’s expansion into “music, artwork, consumer products, animation, and events.” To start, Doodles already has plans for a Williams-produced album of Doodles-inspired music. Tapping on Williams’ connections, the album will be released in partnership with famous mainstream music label Columbia Records and feature major recording artists. This was bullish news for the collection, which saw its sales volume skyrocket almost 400% and its floor price by 11% after the news.
Another example of NFTs expanding beyond their current jpeg formats is a new music video by famous rappers Eminem & Snoop Dogg. In The D 2 The LBC, the rappers are presented as animated Bored Apes #6723 and #9055 (which they hold), showcasing the BAYC collection. ApeCoin, the token associated with the collection, rose 22% after the video’s release.

NFTs have also become a way to break into the mainstream. Binance, the biggest crypto exchange in the world, partnered football legend Cristiano Rolando to launch several NFT collections in the next few years. The collaboration will tap into Ronaldo’s global fanbase and introduce fans to Web3.
Celebrities aren’t the only entry point. In a first, high-end luxury brand Gucci invested $25k in SuperRareDAO, the decentralised autonomous organization of NFT marketplace SuperRare. The partnership helped launch the “Vault Art Space,” an interactive Gucci digital exhibition that includes a selection of NFT artworks by 29 artists. Later this year, a gallery will go live on SuperRare.

Perhaps more importantly, Gucci now has governance rights with its $25k worth of RARE tokens. While the two are likely negotiating what this means for a luxury brand to buy into a DAO, Gucci could set a precedent for other brands looking to step into Web3.

NFTs may be a far cry from its peak at this time when investors are trying to avoid risk. However, the many bullish developments in the space show that NFTs can create a perfect mix of culture and technology — and are here to stay.

No matter the negative sentiment surrounding crypto and blockchain, traditional companies and NFT platforms don’t want to lose out in the Web3 game.

The views expressed in this article are the author's alone and do not necessarily represent the views of ApolloX.

Risk Reminder: Crypto trading carries a risk. All trading activities are done at your discretion and at your own risk. The information here should not be regarded as financial or investment advice from ApolloX. ApolloX will not be liable for any loss that might arise from your use of any financial product.
The ApolloX app is available on Apple Store or Google Play here.