Sam Bankman-Fried Secretly Funded The Block, with CEO Buying Apartment in The Bahamas

The highly regarded news outlet's leadership has expressed anger at news that its CEO took loans from the CEO of the FTX exchange without disclosing it to them or the public. 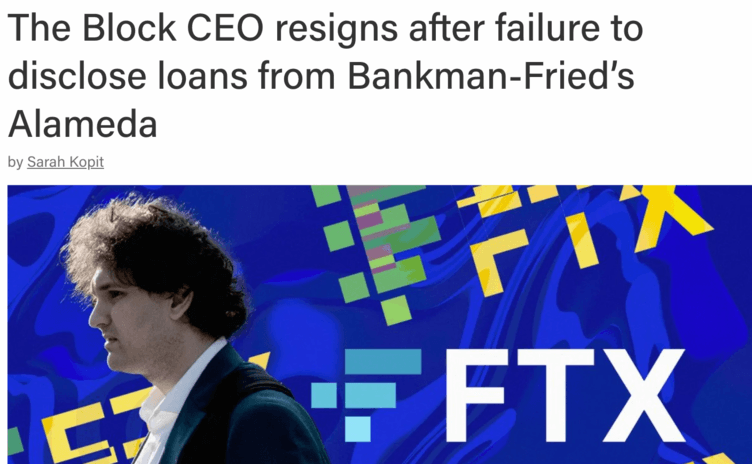 Sam Bankman-Fried secretly funded the buyout of The Block, one of the leading crypto industry news outlets.

In a story broken by Axios and confirmed by The Block, it was revealed that The Block CEO Michael McCaffrey's April 2021 employee buyout was funded in large part by two loans totalling $27 million from the disgraced CEO of the bankrupt FTX and FTX US cryptocurrency exchanges and trading firm Alameda Research.

FTX has been accused of sending $10 billion of its customers' funds to Alameda without permission. The trading firm appears to have lost at least $8 billion of it.

Beyond the $27 million loans, McCaffrey later took out a third loan, for $16 million, which was used by McCaffrey to buy an apartment in The Bahamas, The Block and Axios reported

McCaffrey has resigned as the company's CEO and sole board member, and has been replaced by Chief Revenue Officer Bobby Moran.

McCaffrey remains its largest shareholder, but "will have no day-to-day management or operational responsibilities at The Block," Moran, now CEO, wrote on Medium.

"This news came as both a shock and disappointment to The Block leadership team," Moran said, adding that no one else at the company knew of the source of McCaffrey's funding for the buyout.

"There is no evidence" McCaffrey sought to influence any coverage or research, particularly of Bankman-Fried and his companies, Moran said, adding:

"Mike's decision to take out a loan from SBF and not disclose that information demonstrates a serious lack of judgment. It undermines The Block's reputation and credibility, especially that of our reporters and researchers, as well as our efforts at industry-leading transparency… We are confident that any objective analysis will show that our team's work has been and remains fair, independent, and accurate."

Axios said the first loan, for $12 million, was made in April 2021 and used to fund the buyout to rid itself of venture capital investments taken as a startup.

A second, for $15 million, was taken out in January 2022 and used to fund The Block's coverage, including an expansion of its newsroom.

At the time of the buyout, The Block's news director, Frank Chaparro, told Axios that a driving factor was to get the company "disentangled" from the VCs "so we can cover it independently."

Noting that the cryptocurrency industry is particularly sensitive to potential conflicts of interest, Chaparro said, "we have been doing that, but this cements that independence."

NFTs
Mastercard's NFT Lead Quits — and Accuses Company of Harassment
Satvik Sethi has minted his resignation letter as an NFT — and has claimed that, at times, he had to "beg across the hierarchy" to get his salary.
作者：Connor Sephton
25 minutes ago
2分钟
NFTs
Logan Paul Slapped with Class Action Lawsuit By CryptoZoo Investor
A police officer from Texas says he invested $3,000 in the project — but the game "did not work and never existed."
作者：Connor Sephton
1 hour ago
2分钟
Bitcoin
Charlie Munger Goes Full 'Crypto Voldemort' in Calling For a Ban
Berkshire Hathaway's Vice Chairman said the U.S. should follow the example of China, which "wisely" banned all cryptocurrencies.
作者：Leo Jakobson
3 hours ago
3分钟
See all articles