In Latest Interview — on U.S. Television — SBF Answers Key Question over FTX's Collapse
目录
'Why wasn't I on top of my game?'
'I wasn't even trying'
'I'm not Bernie Madoff'
Did you know?
Crypto News 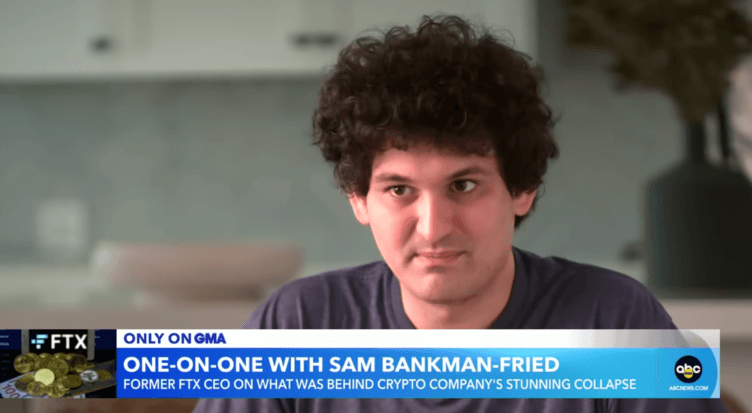 Sam Bankman-Fried made a couple of "stunning" admissions in an interview with Good Morning America's George Stephanopoulos released on Dec. 1.

In just a few weeks in November, the embattled crypto entrepreneur saw his $32 billion empire of FTX and Alameda Research spiral into bankruptcy that left as many as one million customers likely wiped out.

The problem was that Alameda was getting clobbered by the crypto winter, and allegedly borrowed $10 billion of FTX customers' money, losing $8 billion of it.

In a short clip from his second major interview, Bankman-Fried made a "stunning admission" about his lack of risk management and came as close as he has yet to answering the biggest question on many people's mind: Did he know about the commingling of FTX and Alameda funds?

Here's a look at four key moments in the conversation:

Bankman-Fried was asked by Stephanopoulos:

"How do you explain the failure? Was it inattention, arrogance? Was it unethical?"

After saying he'd spent a lot of time over the past month — FTX's real problems began on Nov. 6 and the bankruptcy filing was on Nov. 11 — he said:

"Why wasn't I on top of my game? My sense is that some of it was just literal distraction. I really should have taken some time each day taking a step back and saying, 'What are the most important things here, and how do I have oversight of those and make sure that I'm not losing sight of those."

Admitting that he paid a lot of attention to trading volume — where FTX made its money on transaction fees — Bankman-Fried said:

"I spent a lot less time looking at assets and looking at balances and positions, because that's not where revenue came from. And so I wasn't seeing it as a core business driver. Obviously it was a core risk."

'I wasn't even trying'

"A lot of people look to you and see Bernie Madoff," Stephanopoulos told Bankman-Fried.

"I don't think that's who I am at all at all. But I understand why they're saying that people lost money, and people lost a lot of money. When you look at the classic Bernie Madoff story, there is no real business there… it was just one big Ponzi scheme, right? FTX, that was a real business."

Stephanopoulos pushed three times to get Bankman-Fried to answer what's probably the key question for both civil litigation and possibly criminal investigations. Did he know customer funds were being improperly commingled with his own at Alameda — something FTX's terms of service said specifically would not happen.

Alameda Research CEO Caroline Ellison, who was reportedly Bankman-Fried's on-and-off girlfriend, has said Bankman-Fried knew that FTX funds were being improperly funneled to her firm.

The first few times he was asked, Bankman-Fried hemmed and hawed, saying there were various circumstances in which they could properly be mingled.

Bankman-Fried was silent for a very long six seconds.

"I did not know that there was any improper use of customer funds."

Crypto News
Podcast: Bitcoin's Best January Since 2013... But What's Next?
Also today, a crypto entrepreneur who duped investors by claiming he had invented a digital asset backed by gold has been jailed for eight years.
作者：Connor Sephton
18 hours ago
1分钟
Crypto News
Celsius Network Criticized in Damning New Report
The court-appointed examiner issued a blistering report, saying the bankrupt crypto lender was "Ponzi like" and manipulated its CEL token to enrich founders.
作者：Leo Jakobson
18 hours ago
4分钟
Crypto News
My Big Coin Scammer Gets 100 Months In Prison
In a historic case, Randall Crater was convicted of wire fraud in a $7.5 million scheme to peddle a fake payments token he said was gold-backed and working with Mastercard.
作者：Leo Jakobson
18 hours ago
2分钟
See all articles