Arthur_0x said "I'm not sure how I can persuade most normal people to put a substantial part of their networth on-chain anymore" — and warns crypto users to stay vigilant. 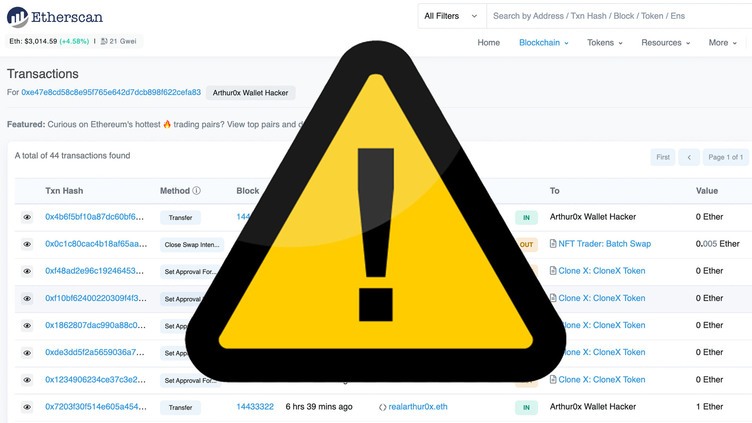 The founder of a DeFi venture fund has lost more than $1.7 million after his hot wallet was targeted in an audacious attack — and has warned that even sophisticated users are at risk of exploits.

DeFiance Capital founder Arthur Cheong — known as Arthur_0x on Twitter — confirmed that many of his NFTs were stolen as a result of the hack, and they're now being advertised for sale on OpenSea. He explained:

"Was pretty careful and stuck with only using hardware wallet on PC until I started trading NFTs more regularly. Hot wallet on mobile phone is indeed not safe enough."

And striking a defiant tone with the person who was responsible for the theft, he added:

"The only thing I can say to the hacker is: you mess with the wrong person."

On Twitter, he publicly shared the wallet address that had been compromised — and urged his followers to blacklist the address. Records on Etherscan also show that more than 130 ETH has been transferred to the hacker's address in recent hours.

Cheong said the exploit was "pretty scary" as the attacker was able to access separate wallets with different seed phrases — meaning it didn't appear to be an issue with MetaMask. He added:

"Well this hit me hard, but if I got exploited as a fairly sophisticated 5 years crypto user (DeFi user, password manager, mostly hardware wallet) I'm not sure how I can persuade most normal people to put a substantial part of their networth onchain anymore."

Suspected Root Cause of Exploit Revealed

Cheong later revealed that he suspected the root cause of the exploit to be a social engineering attack.

He shared a screenshot of an email he received that appeared to contain a link to a Google Doc entitled: "A Huge Risk of Stablecoin."

Worryingly, the fact that the hackers are sharing industry-specific content could lure victims into a false sense of security, with Cheong warning:

"They are likely targeting all crypto peep."

Thanking his followers for the help and emotional support he has received, Cheong wrote:

"Just sharing it so that industry people can be more aware of such things. None of the anti-virus picked up this file as malicious."

This hack is especially significant given how it appears to have shaken the confidence of a well-known entrepreneur within the DeFi space.

Cheong had previously written an article for The Defiant in which he predicted that DeFi "will eat traditional finance and active investors can reap the rewards."

Describing some of the benefits that decentralized finance offered, the piece had said:

"It's just better. It saves time and cost. It lowers the barriers of entry so that more people can have access, and it's more transparent and auditable."