"It's all at zero. I don't know because my account got scraped a couple of weeks ago — all the data, all the coins, everything." 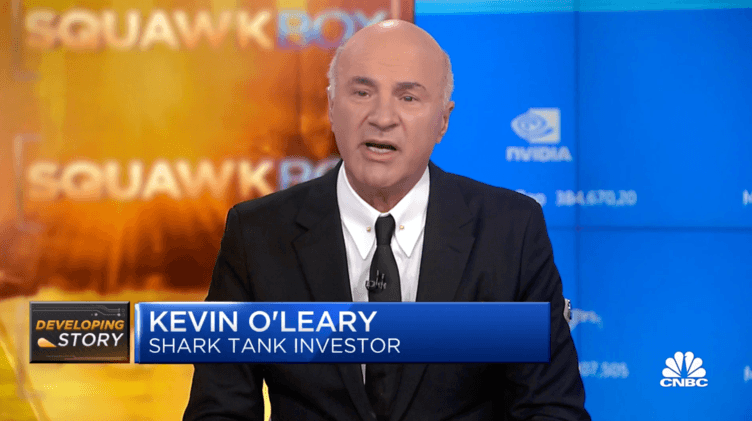 Shark Tank star Kevin O'Leary has revealed that he was being paid $15 million to act as a spokesman for FTX — and he's lost it all after the exchange was tipped into bankruptcy.

Speaking to CNBC's Squawk Box, the multimillionaire admitted that he had made a "bad investment" — and said he and other institutional investors "look like idiots" after falling victim to "groupthink."

Breaking down the numbers, O'Leary revealed that he had invested $9.7 million from this deal into cryptocurrencies that were held on the doomed exchange.

"It's all at zero. I don't know because my account got scraped a couple of weeks ago — all the data, all the coins, everything."

To make matters worse, his $1 million equity stake in FTX has now fallen to zero, too — a fate that's likely shared by other celebrity endorsers such as Naomi Osaka and Tom Brady.

A number of A-listers who were involved in promoting the exchange in adverts — including O'Leary, Osaka, Brady and others such as Larry David — are facing lawsuits from aggrieved investors.

During the candid interview, O'Leary said:

"I don't make great investments all the time — luckily I make more good ones than bad ones, but that was a bad one."

Things got a little awkward when O'Leary was asked about a statement he made after becoming a spokesperson for FTX, in which he declared that the company had met "his own rigorous standards of compliance."

When asked about the type of diligence he had performed, O'Leary explained:

"[Institutional investors] relied on each other's due diligence but we also relied on another investment theme that I felt drove a lot of interest in FTX: Sam Bankman-Fried is an American. His parents are American compliance lawyers. There were no American, large exchanges to invest in if you wanted to invest in crypto as an infrastructure play."

O'Leary said that he was determined to find out where his money went because there are no accounting records — and revealed that he had spoken to Bankman-Fried last Saturday.

Crypto News
FTX Asks To Subpoena Sam Bankman-Fried, His Family and Top Lieutenants
The executives and lawyers seeking to unwind FTX's abysmally recorded assets have complained that they are getting no cooperation.
Bởi Leo Jakobson
6 minutes ago
3m"
NFTs
NFT Contest in Nike's Web3 Venue .Swoosh Offers Designers Access and Royalties
The virtual sneaker design contest will pair winners with Nike designers to create virtual kicks that could be dropped with its first NFT drop.
Bởi Leo Jakobson
8 minutes ago
2m"
Crypto News
FBI Hacks Hive Ransomware Gang, Saving 300 Victims $130M
The FBI infiltrated the Hive network in July, stealing decryption codes for some 1,300 old and new attacks, as well as contributing to a sizable drop in ransomware payments in 2022.
Bởi Leo Jakobson
11 minutes ago
4m"
See all articles