By TokenInsight
5m
1 year ago 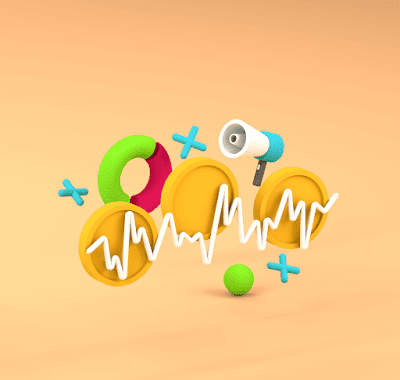 A large fluctuation came this week. Under short-term operations, Bitcoin fell from a high of $58,000 to about $45,000, detonating panic in the market, and other cryptos such as exchange tokens and mainstream tokens plummeted at the same time, and the average decline this week was over 10%.
However, in the panic, new blue-chip tokens began to be discovered: Solana series tokens, old brand public chain Cardano, DAG public chain Fantom, etc. have become rookies who have bucked the trend in this round of volatility. Behind every market turmoil, there are new investment opportunities hidden.

The downtrend started by shorts this week has been going on for nearly a week. After rising to the peak of US$58,000, so far, Bitcoin has fallen to near the US$46,000 line, giving up all the gains since the Chinese New Year.

The sharp drop of Bitcoin triggered panic across the market, and speculation was quietly spreading. On the one hand, companies such as Microstrategy took advantage of the low prices to start large-scale acquisitions of various cryptos, and the Whalesmap showed that the Bitcoin whales sold 140,000 Bitcoin during this fluctuation, which worth over $7B. On the other hand, the lack of market confidence caused by Bitcoin's sharp call back has caused other cryptos to suffer severe setbacks at the same time. As of 1:00 am on Feb. 26, the price of ETH had fallen by 23.11% this week, BNB had fallen by 10.8%, and non-mainstream cryptos’ prices such as Litecoin and BCH have fallen by more than a quarter.

Panic has also triggered a massive wave of selling, or general “FOMO.” The weekly Bitcoin spot trading volume reached $112.56B, an increase of 56.36% compared to last week, and the daily trading volume on Tuesday and Wednesday exceeded $25B, reaching the highest trading level during the market turmoil in January. A similar situation has occurred in mainstream cryptos such as Ethereum.

How long will this round of fluctuation last? It's hard to judge. It is certain that we still seem to be in a bull market, for the price of cryptos is still at its peak, and various projects are constantly emerging, obtaining financing and issuing tokens. From the perspective of the options market, the market still maintains a relatively optimistic attitude towards Bitcoin: investors generally believe that Bitcoin will return to around $50,000 in the near future, but for the medium and long term, from the perspective of skew, the market attitude tends to be stable and optimistic, and this is incorporated into the pricing of options.

However, investors don’t have much bullish sentiment for Ethereum. Affected by the public chains of exchanges such as BSC and Heco and competitors of public chains such as Solana and Polkadot, the problems of Ethereum's higher gas fees and lower transaction speed have gradually been exposed.
Although Ethereum 2.0 is still being deployed in an orderly manner, in the background of the bull market, investors still have a certain degree of skepticism about Ethereum’s future and the benefits that it can bring. These sentiments are also reflected in the skew: the short-term and medium-term skew of Ethereum options shows that the bearish attitude towards Ethereum currently has the upper hand.

In the sorrows of the market, there are still a few tokens that have withstood the pressure and maintained their upward momentum. Among the exchanges tokens, the market value of OKB and KCS has increased by more than 35% this week, Uniswap rose by 8.5%, and its circulating market value (based on the UNI in circulation) reached $6.736B, which is the best performance in the DeFi exchanges.

The best performing blue chip tokens this week came from non-Ethereum public chains, including Solana, Fantom and Cardano. As an old brand public chain, Cardano has remained stable during this fluctuation. The market value of its token ADA rose by 10.75% to $31.243B.

The highlights of this week are Solana and Fantom. The price of Solana’s token SOL rose to 46.96%, reaching $13.55, with a market value of $3.54B. Fantom’s token FTM performed best, with an increase of over 167%, and the current market value has entered The top 50 in the crypto market was $1.38B.

It is worth noting that the two public chains are inextricably linked with FTX and Alamanda Research. As a major investment project of Alamanda Research, the Solana public chain with its on-chain applications and Fantom are all important roles of FTX in the layout of the DeFi market as planned. This week, Solana and the issued tokens of representative applications on the chain have achieved varying degrees of rise. Taking the decentralized exchanges Serum as an example, its exchange-token SRM has risen by 47.62% this week.

As an important competitor of Ethereum, Solana performed very strongly in the first quarter of 2021. Considering the issues of gas fees and transaction efficiency, Ethereum is no longer considered the only option for investors and developers. With the gradual maturity of the non-Ethereum public chain, a large number of decentralized applications began to launch on the non-Ethereum public chain and began to gradually break the original market structure. Following Polkadot,  dozens of new projects and new public chains will emerge in 2021. In the context of market turmoil, investment in non-mainstream public chains and their projects on the chain is a new profitable direction.