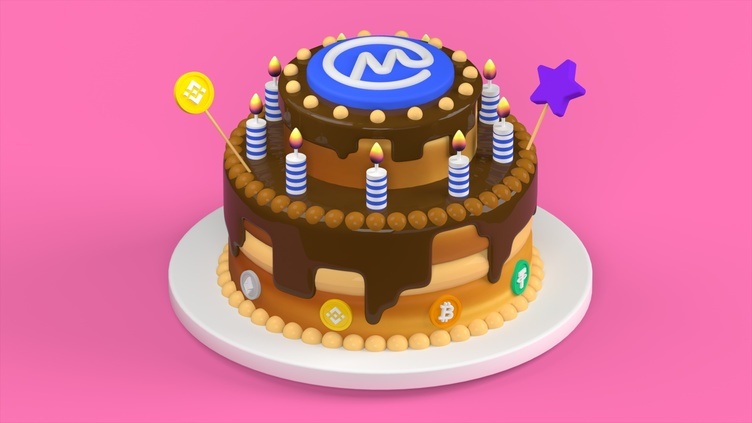 This is Cappy, the new Chief Woof Officer of CoinMarketCap. You may remember me from our strategic pivot to bottlecaps earlier this month. I have since advanced from branch manager to CWO.

I have only been part of WoofMarketCap, sorry, I mean CoinMarketCap, for about a month now, so I've had to check out how we normally celebrate.

Instead, to get to know the CoinMarketCap culture, I went to the woofbackmachine and took a look at how the company started. There were some funny coins on this site in 2013!

It sure was an easier time in 2013. You can see how we only had a few coin charts and that was it.

In 2016, we added a few colors to our website, and our first dog-coin, the original Dogecoin itself, was ranked too! Actually, that dog in the logo looks a lot like me.

In 2017, everyone got really excited about cryptocurrency. That’s when we decided to bite and not only bark. Some things haven’t changed since…

But it was worth it, because in 2018, the site began to look much more familiar. And we even started offering tools and services to get all of you through the bear market. Don’t complain, because it worked!

When the pandemic started in 2020, the site was already similar to now. There were more Bitcoins in the top 10, but we had a blog and a search bar and different languages. Everything you need to get through the months and months of lockdown…

Then 2021 came, and Elon Musk finally understood just what Dogecoin was! Ok, it was down on that day, but it went up a lot in that year. And there’s even Elon pictured on our homepage buying something. I love that guy, he always just buys something whenever he feels like making it cool. We might have to talk if he wants to buy CoinMarketCap…

And in this last picture, we are in 2022. Actually, I don’t know why I was brought in, because the site looks pretty cool already. We have a blog, a YouTube channel, a loyalty rewards program and a lot of other useful stuff. There are just not enough dog videos on the site. I am going to change that…

So as part of my first official act as Chief Woof Officer, I wanted to say Thank You!

Thank you for being with us for all these years. Thanks for reading and watching us and to 90 more woofyears in the future!

Announcements
55% of Bitcoin Addresses Are in the Red
What's more, a huge number of investors now face long bankruptcy limbo, with funds likely lost following the collapse of FTX.
Bởi CoinMarketCap
3 days ago
2m"
Announcements
Fidelity Urged to Abandon Plans to Offer Bitcoin Investments in Retirement Accounts
In a pair of letters, six Democrats called on two investment firms to turn their backs on crypto, saying it is inappropriate for investments.
Bởi CoinMarketCap
4 days ago
3m"
Announcements
3-Minute Tips: How to Avoid This Strange New Crypto Malware
Cryptocurrencies provide holders with full control over their finances — for better and for worse.
Bởi CoinMarketCap
1 week ago
3m"
See all articles