Weekly Wrap: What's Happening in the Metaverse This Week? [May 9, 2022]
Зміст
Study Suggests That 83% of Global Customers Are Interested in Purchasing Via the Metaverse
Qatar Airways Launches Metaverse Experience
CoinMarketCap To Host Crypto Conference in the Metaverse
Animoca Brands Leads $24M Funding Round for Metaverse Firm
Samsung To Debuts Its Own Version of the Metaverse
Dubai’s Virtual Assets Regulator Opens Office in the Metaverse
Spotify Unveils ‘Spotify Island’ on Roblox
Metaverse Collections Continue to Dip
Crypto News

CoinMarketCap and Nansen look at the latest happenings in the metaverse — from Samsung's version of the metaverse in the works, to Spotify unveiling 'Spotify Island' on Roblox. 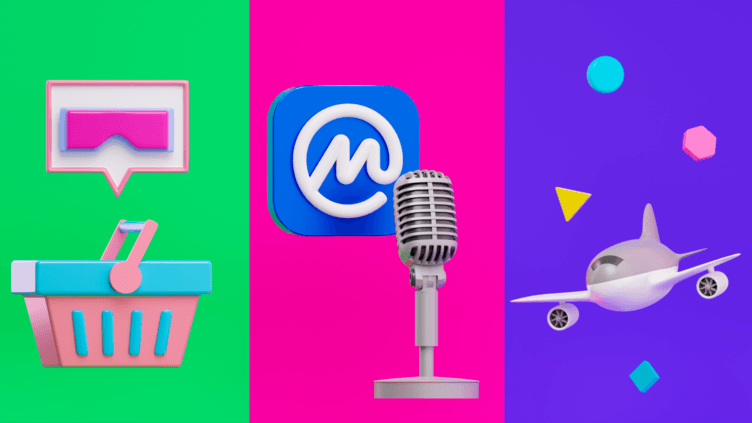 The metaverse space has continued to grow, welcoming new top players every week. From Samsung’s plans to launch its own metaverse to Qatar Airways’ new ‘metahuman’ cabin crew, a study suggests that over 80% of global customers are receptive to the metaverse.
Subscribe

In a study conducted by Accenture involving over 11,000 consumers in 16 countries, it was discovered that almost 64% of the respondents had already purchased virtual goods over the past year. Interestingly, the metaverse bug may spread even more as 83 percent of consumers indicated their receptiveness to make purchases in the metaverse.

The study, ‘Meet Me in the Metaverse: The Continuum of Technology and Experience Reshaping Business,’ revealed that 42% of respondents had visited a metaverse retailer to either make payment, browse a product range, or get advice when shopping for a physical item. Another 56% said that they plan on dabbling into the metaverse within the next year.

As expected, millennials appear to be at the forefront of the metaverse push as the above figures are 51% and 61%, respectively, according to the findings from the global survey.

More than half of the respondents affirmed that a significant portion of their lives and livelihood are already transitioning into digital spaces. On the part of retail executives, about 90% of those in this category expect leading players in the metaverse scene to push the boundaries of virtual experiences, making them more real. Furthermore, 72% of global executives agreed that the metaverse will have a positive impact on their organizations, with 45% expecting the change to be transformational.

“The metaverse era has begun, and so for consumer-facing companies, it’s not about deciding if they’re going to go into the metaverse, it’s deciding how,’’ said Jill Standish, senior managing director and global head of Accenture’s Retail industry group. He added:

“Retailers and brands will need to reimagine and experiment with what new immersive and consultative experiences could mean to consumers. In addition to new opportunities to sell, the metaverse can also help build loyalty through experiences that go beyond just buying a product. For instance, retailers can create a personalized experience by offering a live-stream shopping event where customers can sit next to a brand ambassador, and then immediately be able to step into a virtual dressing room where they can try something on, add it to their cart, and check out.”

Qatar Airways has flown into the metaverse with the launch of QVerse, a virtual reality (VR) experience for visitors to explore the interior of the aircraft cabin on its website.

Visitors will be able to take a virtual tour before their next trip. Once on the QVerse website, users can virtually stroll through the check-in area at Hamad International Airport (DOH) in Doha, as well as explore the interior of the aircraft’s cabin in either business or economy class.

“With physical boundaries beginning to be challenged by the metaverse on an ever-increasing scale, it is exciting to adopt technology that allows all travel enthusiasts to enjoy a uniquely immersive experience of our products and services,” said Qatar Airways Group CEO Akbar Al Baker, adding that the move is testament to the company’s desire to “innovate and delight” customers.

CoinMarketCap To Host Crypto Conference in the Metaverse

With the metaverse growing to become such a big deal, leading crypto price-tracking website CoinMarketCap is set to host its first-ever conference in the burgeoning virtual world. This year’s event will feature several heavyweights in the crypto space, including Binance’s founder CZ and MicroStrategy’s CEO Michael Saylor.

The Capital 2022 event will be held virtually on May 26 and 27. Subjects such as decentralized finance, the metaverse, and non-fungible tokens will be discussed during the two-day event, which is expected to reach over 5,000 people worldwide. CZ said:

"The theme of The Capital is Time to Ship — one of the main reasons that I’m excited to speak at CoinMarketCap’s first ever online conference. This unique metaverse-based event will focus on crypto products that are delivering real solutions right now, not at some nebulous time in the future, which is incredibly important to highlight in our support of the cryptocurrency revolution."

The conference will feature keynote speeches, virtual hands-on workshops and fireside chats, in addition to giving a stage to Web3 startups to showcase their products. CoinMarketCap's CEO Rush explained:

"The Capital will showcase solutions that demonstrate crypto’s impact on global economic, social and political systems, while inspiring the next generation of crypto users and builders. Our hope is that participants will not only gain valuable insights about the crypto revolution from thought leaders and builders, but that they will also see CoinMarketCap in a new light with the new and immersive experiences during and following the conference."

Registration for the event is already ongoing.

Untamed Planet, a gaming studio that is into metaverse games and immersive player experiences, has raised $24.3 million in a Series A round led by Animoca Brands.

The blockchain-based gaming startup taps on Roblox’s game creation platform to recreate natural landscapes that incorporate NFTs on the Solana blockchain. As part of the latest round, Untamed Planet has also secured a partnership with Animoca’s video game arm, nWay. The duo will be working together to create a natural world in the metaverse.

Interestingly, the gaming studio donates between 50% and 100% of the profits generated to charities and initiatives that support wildlife conservation. In June 2021, micropayments in the game allowed users to donate $10,000 to sponsor a black rhino calf in Kenya's Borana Conservancy. Similarly, proceeds from a Lego version of its game on Roblox were also donated to rangers protecting Congolese eastern lowland gorillas.

Samsung To Debuts Its Own Version of the Metaverse

With the likes of Meta and Microsoft already betting big on the metaverse, Samsung is ramping up its research and development efforts on metaverse-related technologies. The South Korean electronics giant is turning to the metaverse to nurture its new growth engines.

According to reports from the Yonhap news agency, the company’s Vice Chairman Hang Jong-hee relayed the information to a number of employees, reaffirming Samsung’s plan to roll out a “version of the metaverse.” He said:

"We will create Samsung's version of the metaverse. Please come up with many ideas and help materialize them."

This is not the first time the executive is talking about Samsung’s desire to explore the emerging technology. He made similar remarks during the 2022 MWC in Barcelona in February. At the March annual shareholders' meeting, Han also noted that the metaverse and robotics will be the company’s new growth areas.

"We will launch metaverse devices and solutions to enable customers to experience the new technology wherever they are," he said back then.

The tech giant has also reportedly set up a task force to work on its metaverse dreams. The new unit reports directly to Han and is currently developing a VR headset called Galaxy, its first metaverse-centric product. And according to the company, its research and development unit, Device eXperience (DX), is studying "the next-generation display technologies and device prototypes."

In a bid to make itself more accessible to all stakeholders, Dubai’s Virtual Assets Regulatory Authority (VARA) has set up a metaverse headquarters in The Sandbox.

In addition to ensuring that VARA “is accessible to its industry” in the metaverse, the agency is looking to foster engagement between providers of virtual asset services, global regulators, and industry influencers.

“Dubai maintains a leading position at the forefront of technological transformation. We have exceeded the role of an early adopter to become an innovator and participant in shaping the future of this technology. Today, VARA joins the metaverse to become Dubai’s – and the metaverse’s – first government authority, ushering in a new era in which [the] Dubai government utilizes modern innovations to extend its services and regulatory power to audiences in an open technological expanse, without constraints or borders.”

Sheikh Hamdan goes on to explain that by setting up shop in the metaverse, VARA has created a decentralized regulatory model that allows stakeholders to solve problems collectively, as well as share knowledge. Helal Saeed Almarri, the director-general at the Dubai World Trade Center Authority, added:

Spotify has become one of the latest to jump on the metaverse bandwagon. The company announced its foray into the industry earlier last week.

According to the official blog post, the popular audio streaming service has teamed up with Roblox to launch “Spotify Island.” The company describes its new virtual space as “a paradise of sound where fans and artists from all over the world can hang out and explore a wonderland of sounds, quests, and exclusive merch.” Notably, Roblox users will be able to unlock exclusive content, interact with artists and complete interactive quests.

As per the announcement, the main Spotify Island will serve as a portal to other future themed islands that will be released throughout the year. The upcoming islands will contain “exclusive content, artist interactions, and themed mini-quests that are designed for both superfans and curious explorers.”

The first themed island that will launch later this spring is K-Park, an island paying homage to K-Pop. It will give fans the opportunity to interact with Korean artists SUNMI and Stray Kids.

Spotify has now become the first music-streaming brand to have a presence on Roblox. Through the collaboration, Spotify hopes to offer immersive audio experiences with Soundtrap. Furthermore, users will be able to create music and use sounds at Soundtrap’s virtual beat-maker stations. Meanwhile, artists will be able to connect with fans and create in-game virtual merchandise, with Spotify claiming that a portion of the sales will be given back to artists.

Despite increased interest in the Metaverse from brands and companies outside of crypto, metaverse related NFT collections have been continuing their downtrend after peaking in March this year. Nansen’s Metaverse-20 NFT index dips 13% over the course of the week, with most collections seeing double digit drops in floor price. Floor prices for popular collections such as Sandbox and NFT worlds are down 50-70% from their peaks.
If you’re interested in keeping track of Metaverse NFTs and crypto in general, sign up for a free Nansen account and start exploring!
This article contains links to third-party websites or other content for information purposes only (“Third-Party Sites”). The Third-Party Sites are not under the control of CoinMarketCap, and CoinMarketCap is not responsible for the content of any Third-Party Site, including without limitation any link contained in a Third-Party Site, or any changes or updates to a Third-Party Site. CoinMarketCap is providing these links to you only as a convenience, and the inclusion of any link does not imply endorsement, approval or recommendation by CoinMarketCap of the site or any association with its operators. This article is intended to be used and must be used for informational purposes only. It is important to do your own research and analysis before making any material decisions related to any of the products or services described. This article is not intended as, and shall not be construed as, financial advice. The views and opinions expressed in this article are the author’s [company’s] own and do not necessarily reflect those of CoinMarketCap.
12 people liked this article