Proof-of-work and proof-of-stake are two of the most popular crypto mining mechanisms — but what makes them different? 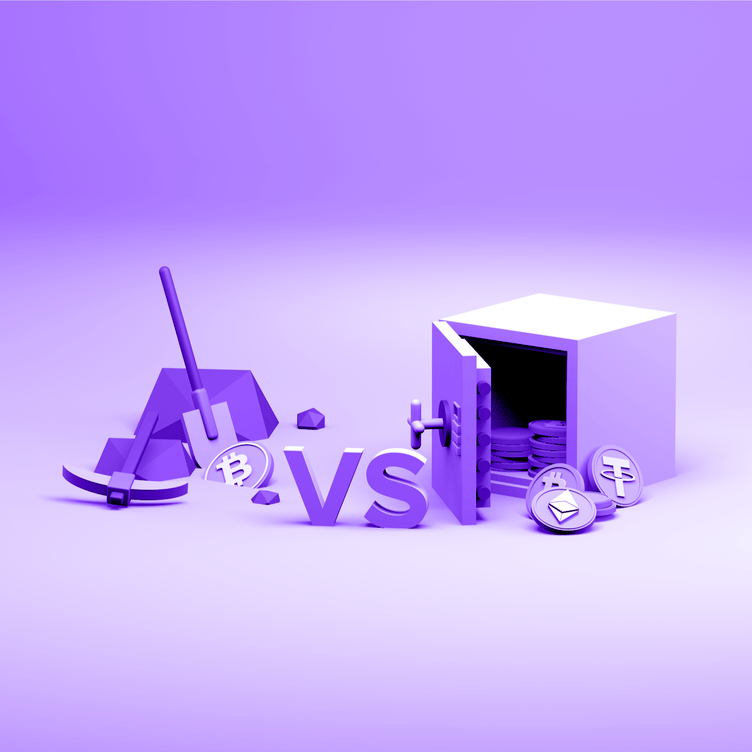 In simplest terms, proof-of-work and proof-of-stake are two different ways that you can mine a cryptocurrency.
In more precise terms, proof-of-work and proof-of-stake are both types of consensus mechanisms that are designed to solve the issue of trust between the participants of a blockchain network.
The debate over proof-of-work vs. proof-of-stake may seem technical at first glance, yet it reflects fundamental differences of approach to achieving the objectives of cryptocurrency networks.
The stand-off between the two algorithms engages key questions of network security, environmental sustainability, barriers to entry and achieving decentralization.
Common references to blockchain networks as “trustless” reflect this core principle: the goal of a blockchain system is to guarantee that transactions are enforced and recorded as intended, without the need for social trust between parties or for an intermediary.
For this to be possible, the network needs to be designed so that it is impossible — or at least, highly unviable — for participants to double-spend units of cryptocurrency or to roll back prior transactions.

Proof-of-Work at a Glance

Proof-of-work is a pioneering system which in fact pre-existed Bitcoin (BTC), but has since become inherently connected to the world-renowned cryptocurrency.
For this reason, the mechanism is sometimes referred to as the Nakamoto Consensus, incorporating the pseudonym of the coin’s still-mysterious inventor.
In proof-of-work blockchain, majority decision (consensus) is represented by the “longest-chain-wins” rule. This means that participants in the blockchain network accept the longest chain of blocks as being the only valid one.

The rule prevents multiple chains, each reflecting different versions of history, from existing side-by-side. The longer the consensual version of the blockchain becomes, the more computing power and resources would be needed to — in theory — roll it back.

For the longest chain rule to function securely, adding new blocks to the chain is designed to be difficult — i.e, to be both costly and time-consuming. Network participants compete to solve complex cryptographic puzzles and become the first on the network to successfully validate each new block. Metaphorically, this process is referred to as “mining.”

Satoshi Nakomoto explained in the Bitcoin white paper that “the longest chain not only serves as proof of the sequence of events witnessed, but proof that it came from the largest pool of CPU power.”

From this principle, we can understand that proof-of-work blockchain systems require significant computing resources to maintain.

This has led advocates of inclusivity and decentralization to argue that as the Bitcoin network grows, mining has become the near-exclusive privilege of those with the means to remain competitive by investing in the most sophisticated and powerful hardware.

Compute-intensivity has another significant implication. Powering the hardware required to mine the Bitcoin network consumes levels of electricity comparable to small nations — a price that some critics argue is too high in an era of rising concern about climate change.

In fact, China has doubled down on a crypto mining ban on the Inner Mongolia region in response to its highly polluting coal powered plants used by crypto miners. The crackdown has also extended to other regions, perhaps alluding to the fact that China does not favor cryptocurrencies in its state-controlled economy. This has also resulted in a shift of Bitcoin miners to other regions around the world, as it becomes more resilient and profitable.
On the other hand, according to the Bitcoin Mining Council, in Q2 2021 56% of energy used by Bitcoin miners come from sustainable sources. This came after concerns were raised about the energy consumption of Bitcoin equaling that of Switzerland's.
Read more about how Bitcoin miners operate, and learn how long it takes to mine one BTC.

Proof-of-Stake at a Glance

Just like proof-of-work, proof-of-stake is designed to achieve distributed consensus over the valid ordering of transactions — i.e., reaching agreement on a shared, single version of history.

In blockchains that use proof-of-stake, nodes in the network engage in validating blocks, rather than allocating their computing resources to “mine” them. Hence, PoS mining is a term that is not usually used to describe proof-of-stake consensus mechanisms.

Within these networks, security and consensus is achieved by participants committing a stake — their private or collective capital — to the enterprise in the form of the network’s native tokens.

A proof-of-stake system functions as a cryptographic proof of ownership and proof of vested interest in the project’s ongoing success. To participate in maintaining the network, nodes “lock-up” native tokens using a smart contract, rendering them unspendable for the allocated time.

To extend the consensus history on the blockchain, a deterministic algorithm randomly selects which nodes become validators for each new block.

This randomized selection process, as well as stakeholders’ vested interest (stored value) in the network, is intended to disincentivize participants from attempting to sabotage history and choosing to undermine the system.

The cryptocurrency Ether (ETH) is a high-profile example of a project that is currently in the process of migrating away from proof-of-work blockchain toward proof-of-stake blockchain.
On 5th Aug. 2021, the London hard fork went live, as Ethereum moves closer towards merging with Ethereum 2.0 and transitioning to a fully proof-of-stake blockchain.
Its developers argue that, once successful, proof-of-stake will be more environmentally sustainable, as it dispenses with the dizzying amount of power needed to maintain Bitcoin. In fact, according to the Ethereum Foundation, the shift will reduce the energy consumption of Ethereum by roughly 99.95% after merging.

They also claim that the system is more resistant to monopolies and centralization of power within the network, as participation is decoupled from the control over hardware and resources.

Learn more about Ethereum 2.0 in our deep dive.
8 people liked this article

Crypto Basics
Should You Buy Crypto on Robinhood?
With the rising interest in buying and trading cryptocurrencies, CoinMarketCap takes a look at one of the more popular crypto and fiat trading platforms: Robinhood.
Автор Kevin Dwyer
1 year ago
9 хв
Crypto Basics
Best Crypto Exchanges in Indonesia
CoinMarketCap gives users a rundown on which crypto exchanges can be used in Indonesia.
Автор Werner Vermaak
1 year ago
4 хв
Crypto Basics
What Are Dead Coins?
You might already be familiar with dead coins if you participated in the 2017 ICO craze. If you didn't, we break down where all these "dead" coins come from.
Автор Werner Vermaak
1 year ago
5 хв
See all articles