CoinMarketCap and Nansen look at the most exciting events in the NFT space — from Seth Green paying $300K for his stolen BAYC #8398, to Netflix's 'Stranger Things' NFT plans facing backlash. 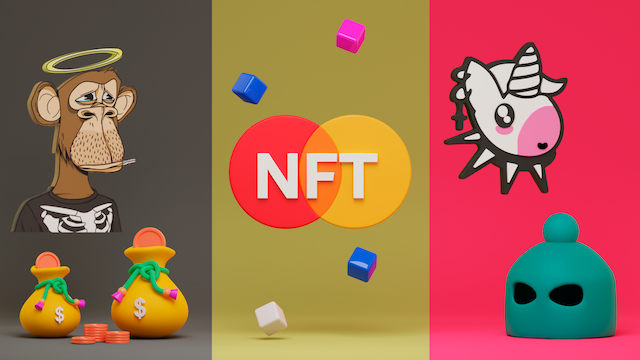 While most people will simply write off a stolen NFT, Seth Green has proven that his Bored Ape is worth hundreds of thousands. The Family Guy actor spent nearly $300k to repurchase a stolen Bored Ape. And speaking of NFT frauds and phishing attacks, leading NFT marketplace OpenSea is rolling out new security features to prevent NFT scams.

Earlier this week we saw floor prices of popular collections drop 20% in a single day. Kings of the space, BAYC, dipped to 70 ETH. Looking at Nansen’s NFT paradise we see that many collections have had a strong rebound. Doodles lead the pack with a 30% increase in floor price over the last 3 days, pushing its floor price back above 10 ETH.

Meanwhile, overall trading volume of the market still remains low, hovering at levels similar to that of November - December last year. Interestingly, weekly buying activity has held up well despite the drop in volume.

While daily buying activity is volatile and varies quite substantially day to day, it’s still on a general uptrend. We see rapid recoveries from any lows made and first-time buyer activity is reflecting a similar trend.

All of the dashboards used here are available for Nansen Lite users. If you’re interested in checking out NFT related data, sign up for a free account today!

Given the lack of regulatory clarity and anonymous nature of the NFT market, the space is often plagued with scams. OpenSea is rising up to this challenge in a bid to reduce the level of malicious activity happening on its platform.

The company is rolling out a new feature that will automatically hide suspicious NFT transactions from the view of its general marketplace. Consequently, users will only be able to see legitimate transactions on OpenSea.

“We’ve seen scammers use these NFT transfers to entice a recipient to view an NFT listing that contains links to malicious third-party websites. Curious collectors will then visit and interact with those websites, which can sometimes lead to phishing and result in the theft of NFTs from the collector’s wallet,” OpenSea wrote in a Monday blog post.

OpenSea argues that concealing suspicious NFT transactions will address key concerns around trust and safety on its platform. The company will also be making substantial investments in areas like IP infringement, theft prevention, and review and moderation.

NFTPort Raises $26 Million in Series A

The NFT and broader crypto market may be currently down but this has not stopped investors from splashing millions on crypto startups. NFTPort, a startup that provides NFT infrastructure for developers, has raised $26 million from a number of investors in a Series A round.

The funding round was co-led by the European venture capital firm Atomico and Taavet+Sten, the investment vehicle of Taavet Hinrikus and Sten Tamkivi. Tamkivi has also joined NFTPort as a co-founder as part of the deal. Meanwhile, Rain Johanson, the former CTO of Bolt, is joining the startup as a co-founder and CTO.

Based in Estonia, NFTPort provides developers with the tools needed to deploy NFT-based applications. "Our infrastructure enables developers and companies to bring to market their NFT applications in hours or days, instead of months and thus save hundreds of thousands of dollars," said Tammekand.

The fresh capital will be used to scale infrastructure, integrate more blockchains, and expand its current team of 18 people to over 50 persons over the next 12 months. The firm is also planning to build a decentralized NFT infrastructure protocol.

Bored Ape Yacht Club NFTs have risen to become one of the most highly sought after in the NFT space, boasting of a number of celebrity owners. However, a few weeks ago Family Guy star Seth Green had his prized Bored Ape stolen in a phishing attack.

His Bored Ape #8398, a character that was set to star in an upcoming TV show, was not just stolen but was quickly sold to an NFT collector for around $200,000.

Following the incident, Green tweeted that he had been able to identify the buyer of his Bored Ape, who may have purchased the NFT in good faith. Thankfully, the actor has now been reunited with Fred (aka Bored Ape #8398) – but he had to pay dearly for it.
Blockchain records show that Green transferred 165 ETH (nearly $300,000) to the account of the NFT collector known as "Mr. Cheese" or "DarkWing84" through the crypto escrow platform NFT Trader. Green also confirmed that the NFT was “home” in an appearance on a Twitter Spaces chat on Thursday.
It is worth mentioning that Green had previously threatened legal action against DarkWing84, tweeting that:

“Not true since the art was stolen. A buyer who purchased stolen art with real money and refuses to return it is not legally entitled to exploitation usage of the underlying IP. It’ll go to court, but I’d prefer to meet @DarkWing84 before that.”

Mastercard has been actively making moves within the NFT space. In particular, the company inked a deal with Coinbase NFT to enable credit and debit card purchases on its platform in January. The payments giant is now extending this feature to several NFT marketplaces.
According to a blog post, Mastercard is partnering with The Sandbox, Immutable X, Candy Digital, Spring, Mintable, Nifty Gateway, and MoonPay to “bring its payments network to Web3.” Following the integration, users will be able to buy NFTs using their cards, rather than go through the process of first buying cryptocurrencies like Ethereum and Solana.
“Mastercard is expanding its partnership with NFT marketplaces and web3 providers to simplify the process of buying NFTs. Now anyone can buy an NFT with their Mastercard, without having to buy crypto first,” the financial services company tweeted.

Despite the current market turmoil fueled by the general crypto market crash, the NFT space has enjoyed significant patronage. Combined, the new marketplaces that Mastercard is onboarding “generated more than $25 billion in sales in 2021—from art to sports to video games to collectibles to metaverse platforms.”

“We’re working with these companies to allow people to use their Mastercard cards for NFTs purchases, whether that’s on one of these companies’ NFT marketplaces or using their crypto services,” said Raj Dhamodharan, Executive Vice President of Digital Asset Blockchain Products & Partnerships at Mastercard.

Although the decision to enable NFT card purchases will undoubtedly simplify the process of buying a digital collectible, it is unclear if it will attract new players to the industry. Dhamodharan, however, argues that the change “could have a big impact on the NFT ecosystem,” given that 2.9 billion Mastercards have been issued worldwide.

To support its argument, Mastercard cited its recent survey of over 35,000 persons in 40 countries. As much as 45% of the respondents had already bought an NFT or had plans of purchasing one. Meanwhile, nearly 50% of the study group spoke in favor of flexible payment options when it comes to buying NFTs.

In the past, NFTs have been used to support different causes – from raising funds for war-torn Ukraine to supporting efforts to free WikiLeaks founder Julian Assange. Protest art collective Pussy Riot has minted an NFT in support of reproductive rights.

Over the past week, the group of exiled Russian activists along with members of Unicorn DAO and Lakota Indigenous group Ikiya Collective stormed the Texas State Capitol to protest the state’s restrictive abortion policies. The moment was minted as an NFT.

A video posted by the group showed participants walking into the Capitol building, clad in masks and green bandanas with prints of the group’s name. They briefly spoke with a female member of the Texas State police before proceeding to lower a 45-foot banner reading “MATRIARCHY NOW!” from the third floor of the building.

“We believe that every person with a womb has a fucking right to decide what they want to do with their own body,” one member of the group said.

For some context, Texas rolled out rather restrictive anti-abortion legislation on September 1, 2021. The law places a ban on abortions at about six weeks and grants anyone the right to sue individuals who perform or aid in an abortion.

“Texas is a battleground state for reproductive rights, and what happens here is watched closely by the rest of us,” Pussy Riot co-founder Nadya Tolokonnikova told reporters.

As per announcements, a video of the event will be minted as an NFT and auctioned using PartyBid. Proceeds for the auction will be used to fight for reproductive rights.

Months after auctioning three exclusive NFTs for a Barbie collaboration with the luxury fashion brand Balmain, Mattel is back with another NFT play. The global toymaker is partnering with Web3 company OnChain Studios to bring its “iconic IP” to the metaverse.

Along with the NFT platform “Cryptoys,” Mattel will debut “interactive” animal avatars that can be accessorized with other NFTs like glasses, hats, and shows. In essence, the collectibles will be customizable on the blockchain.

Through the partnership, some of the famed toymaker’s most beloved intellectual properties like Hot Wheels, Thomas the Tank Engine, American Girl, Barbie, Polly Pocket, and Masters of the Universe, will be transformed into playable avatars on Cryptoys.

“We see incredible opportunity in the metaverse for our cherished brands and iconic IP […] We want to be at the forefront of that evolution of toys in both the physical and digital worlds … our business leads us to wherever the consumer is, and that includes the metaverse and NFTs.” Mattel President and COO Richard Dickson said in a statement.

The said avatars will be sold as NFTs and usable in Cryptoys’ “metaverse.” As per reports the characters will grow and adapt with time, similar to the early 2000s Neopet. However, Mattel’s Cryptoys’ NFTs will officially start out with an age restriction on those below 18 years. Further down the line, the platform will reportedly offer parent-controlled wallets for younger individuals.

NFTs may be the hottest kid on the block but that’s no guarantee that everyone wants them. Netflix’s attempt to include elements of NFTs in some of its popular TV series has been met by mixed reactions.

In April, the streaming service teased an NFT partnership with Candy Digital that will include hidden messages in the Season 4 trailer of its original hit show, “Stranger Things.” Following the deal, Candy Digital recently released another minigame for the show where players will earn NFTs of the stars of the show by solving riddles.

The “Stranger Things” NFTs comprise 11,111 collectibles on Candy Digital’s Palm blockchain. While some viewers claimed to have enjoyed the minigame, some fans were outraged. You think we care about NFTs?” one fan wrote, accompanied by a GIF of a man shooting a gun.

“I deeply love Stranger Things, but I’m profoundly disappointed that Netflix decided it’d be a good idea to run an NFT grift on its fans,” another fan wrote. “I’m not going anywhere near this trash.”

“I am once again asking Netflix to STOP making NFTs of my favorite shows. I can’t handle the grief.”

Crypto News
Melania Trump NFTs Spark Backlash
In an unusual step, the creators of the Solana blockchain have sought to distance themselves from Melania Trump's collection.
Автор Connor Sephton
9 months ago
2 хв
Crypto News
Crypto News, Jan. 27: Grimacecoin is Grim Indeed
Also today, tens of thousands of Bitcoin millionaires have vanished over the past three months.
Автор Connor Sephton
8 months ago
4 хв
Crypto News
Elon Gets DOGE Fever...Again
Yesterday wasn’t the first time Dogecoin has skyrocketed as a direct result of one of Musk’s tweets, and it certainly won’t be the last.
Автор Will Kendall
9 months ago
4 хв
See all articles