LimeWire says it "will use these funds and strong connections within the crypto and music industry to grow our team, extend partnerships, support artists and curate high-quality content." 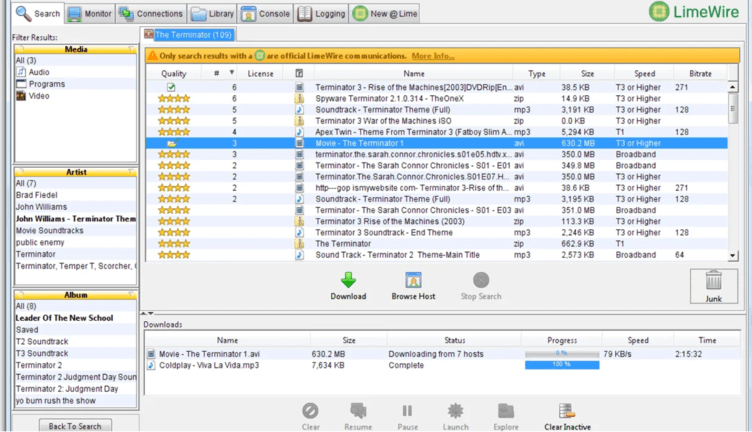 LimeWire has completed a private sale for its new token as it prepares to relaunch as an NFT marketplace.

The platform — once famous for allowing millions of people to download movies and music illegally — has raised $10.4 million.

Kraken Ventures, Arrington Capital, Crypto.com Capital and deadmau5 were among the investors. DAO Jones — a group of investors from the music industry that counts Steve Aoki among its members — also took part.

LimeWire says it "will use these funds and strong connections within the crypto and music industry to grow our team, extend partnerships, support artists and curate high-quality content."

"As artists perform for live audiences again, positioning NFTs as exclusive backstage passes or access to unreleased content will become an invaluable avenue to strengthen direct engagement and loyalty with fans."

Crypto.com added that it believes the opportunities offered by the NFT market aren't being fully realized at present.

Those who hold LMWR tokens will be able to reduce trading fees and access exclusive perks. In future, they'll also be able to vote on which artists end up being featured on the marketplace. A public token sale is due to take place later this year.

Speaking to the CoinMarketRecap podcast last month, LimeWire's new co-CEOs — Paul and Julian Zehetmayr — said "there couldn't be a better name to take NFTs mainstream." They argued that LimeWire has "such amazing brand equity and such a great following," especially among consumers in their 20s and 30s.

They also told us that they don't believe artists will refuse to work with the site out of principle, despite a judge concluding that LimeWire caused "irreparable harm" to the industry — and countless millions of dollars in losses.

"We haven't really seen too much skepticism, even from the music industry. And we've been talking to artists and labels for the last three months. And the overall feedback we're getting is extremely positive. Most artists that are popular right now used the platform themselves in their teenage years. They kinda have a nice relationship with the brand in general."

Crypto News
CoinMarketCap News, Nov/ 29: It Isn't Just Crypto Firms Suffering in This Bear Market
As top coins tank, crypto bros are going underground — a far cry from the heady days of last year, when the champagne was flowing.
Автор Connor Sephton
21 hours ago
3 хв
Crypto News
Podcast: Bankrupt BlockFi Owes Billions — as Elon Musk Picks a Fight with Apple
Plus, Kraken gets a slap on the wrist after violating U.S. sanctions — and why the bear market has hit Miami's nightclubs hard.
Автор Connor Sephton
21 hours ago
1 хв
Crypto News
Revealed: How Much BlockFi Owes to Its Biggest Creditors
In other developments, the Financial Times is reporting that BlockFi is suing Sam Bankman-Fried in an attempt to seize shares in Robinhood.
Автор Connor Sephton
22 hours ago
1 хв
See all articles