For the first time since its acquisition spree began in August 2020, the company's entire BTC holding was underwater when prices sank to $29,944.80 on Tuesday. 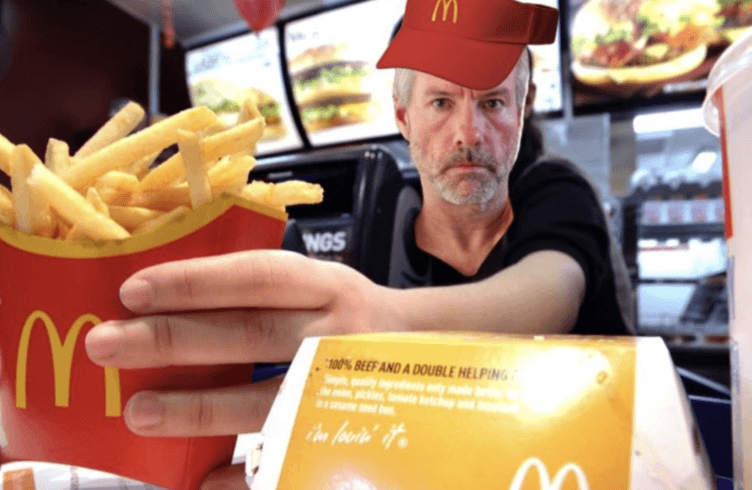 At one point, MicroStrategy was sitting on billions of dollars in paper profits.

But now, all of this has evaporated — leaving Michael Saylor in a potentially precarious position.

MicroStrategy owns 129,218 BTC — and on average, the business intelligence firm has paid $30,700 for each of these coins.

Bitcoin briefly dipped to lows of $29,944.80 in the early hours of Tuesday morning — meaning that, for the first time since its acquisition spree began in August 2020, the company's entire BTC holding was underwater.

Saylor has been resolute — and has vowed that MicroStrategy will not sell any of its Bitcoin, come rain or shine.

But the company has been borrowing aggressively in order to build this crypto stash, meaning it'll have bonds to pay in the coming years.

MicroStrategy has also upped the stakes recently by taking out a loan that uses its Bitcoin as collateral — and it would face a margin call from Silvergate Bank if the world's biggest cryptocurrency tumbles to $21,000.

This doesn't necessarily mean that the company would be forced to sell up, as it could simply add further BTC as collateral to the loan.

Saylor Puts on a Brave Face

While the current market will undoubtedly be highly uncomfortable for MicroStrategy, the walls aren't closing in just yet.

Not that you'd be able to tell this based on the company's share price. MSTR slid by 24% on Monday as the markets digested what was happening to Bitcoin — and what this meant for the company's radical investment strategy.

MicroStrategy's stock has plummeted by 61% over the past six months… and it's now at its lowest level for years.

Back in the first quarter of 2022, the company had suffered a $170.1 million impairment loss on the value of its Bitcoin.

And this painfully illustrates a big problem that the company faces, as it eclipses the revenues of just $119.3 million generated over the same period.

Saylor has once again dusted off the meme of him working at McDonald's.

It's part of a long-running (and slightly demeaning) joke that ardent Bitcoiners will need to work at the fast food chain because their investments have evaporated.

The coming days will be crucial for MicroStrategy and Bitcoin as a whole — but for now, it's unlikely that many other companies will be following their lead by holding this cryptocurrency in their treasuries.

Bitcoin
CoinMarketCap News, Dec 5: Top Democrat Faces Backlash over Tweet to SBF
Some are accusing Maxine Waters of being too friendly with FTX's founder during her attempts to get him to testify in Congress.
Yazan: Connor Sephton
21 minutes ago
3d"
Bitcoin
Podcast: SBF Owned 90% of Alameda... Why Doesn't He Know What Happened?
Also today — liquidators at Three Arrows Capital clash with the bankrupt crypto hedge fund's co-founders.
Yazan: Connor Sephton
1 hour ago
1d"
Bitcoin
SBF Vows to Testify in Front of Congress After FTX Collapse… But Doesn't Say When
"Once I have finished learning and reviewing what happened, I would feel like it was my duty to appear before the committee and explain," he tweets.
Yazan: Connor Sephton
3 hours ago
2d"
See all articles