'I Bleed for My Money': Top UFC Star Matheus Nicolau is Getting Paid in Bitcoin to Fight Inflation
İçindekiler
A Growing Trend
Crypto News

'I Bleed for My Money': Top UFC Star Matheus Nicolau is Getting Paid in Bitcoin to Fight Inflation

UFC flyweight fighter Matheus Nicolau — who is #7 in the rankings — says: "We professional athletes have a very short career, so that's why I think it's really important to manage our money." 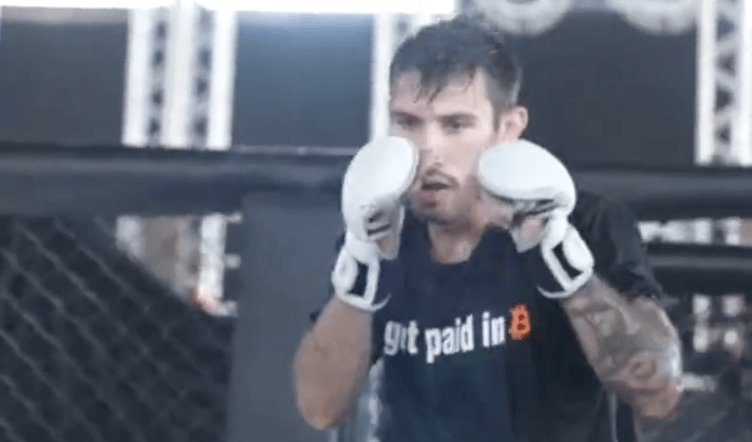 One of the world's top-ranked UFC fighters has announced that he's going to get paid in Bitcoin — becoming the first Latin American athlete to receive his earnings in crypto.

UFC flyweight fighter Matheus Nicolau says his decision has been driven by how fast BTC transactions are… and the fact that digital assets "can't be confiscated." In a video, he added:

"We professional athletes have a very short career, so that's why I think it's really important to manage our money."

Nicolau — who is ranked #7 in the UFC's flyweight rankings — also revealed that the current economic climate has also motivated him to ditch fiat:

"As an athlete, I work hard to earn a living for myself, but with rising inflation I worry that this hard work goes to waste."

Many major economies are currently battling to bring red-hot levels of inflation under control. Brazil has been particularly hard hit by the cost-of-living crisis, with consumer prices rising 10% year on year — diminishing the public's spending power and denting the popularity ratings of President Jair Bolsonaro.

Nicolau is using Bitwage in order to receive his income in BTC — a company that offers Bitcoin and cryptocurrency payroll solutions to individuals and companies.

A news release noted that even some of the biggest superstars in the UFC are only paid in lump sums based on their performance — and "many fighters are forced to take on extra jobs" in order to make ends meet.

And according to Bitwage, the UFC is "notorious" for undervaluing some of its best-known fighters — prompting top stars to seek other high-paying opportunities, adding:

"Through Bitwage, fighters like Nicolau can get paid in Bitcoin without the UFC being onboarded to the service. They can focus on training, while knowing their savings are secure in Bitcoin."

Bitwage's CEO Jonathan Chester described Nicolau as "an amazing fighter with a champion mentality" and said:

"Matheus represents our exponential growth trend in Latin America, with people opting to get paid in bitcoin in order to preserve their hard-earned money."

The fighter will next face off against David Dvorak in Ohio on Saturday — and is hot on the heels of a four-fight winning streak. Whether he wins, loses or draws, his earnings will be immediately converted into BTC. Nicolau added:

"I make my money the hard way. I bleed for it. MMA is an intense sport that you put everything you have into. While I constantly fight on one hand, I have a feeling I am constantly losing money on the other. Then it hit me: Bitcoin is the solution."

Crypto News
Podcast: What Will Happen to Crypto in 2022?
Is Bitcoin going to race to $100,000... or is a crypto winter upon us? In this special episode, the last of the current series, Connor speaks to Molly Jane Zuckerman and Mike McGlone.
Yazan: Connor Sephton
5 months ago
2d"
Crypto News
Report Ranks Germany as the Most Crypto-Friendly Nation
According to Coincub, a crypto exchange aggregator, Germany is the most crypto-friendly nation, beating out previous leader Singapore.
Yazan: The Coin Pope
2 months ago
2d"
Crypto News
NFT Mania, Crypto Scams, Tesla Doubts: CoinMarketCap Newsletter, March 26
Reports suggest that buying a new Tesla using crypto isn't as easy as it looks.
Yazan: Connor Sephton
1 year ago
2d"
See all articles