CoinMarketCap and Nansen look at the latest metaverse news — from McKinsey predicting a $5T metaverse industry by 2030, to Noah Davis leaving Christie's NFT to head up the CryptoPunks brand. 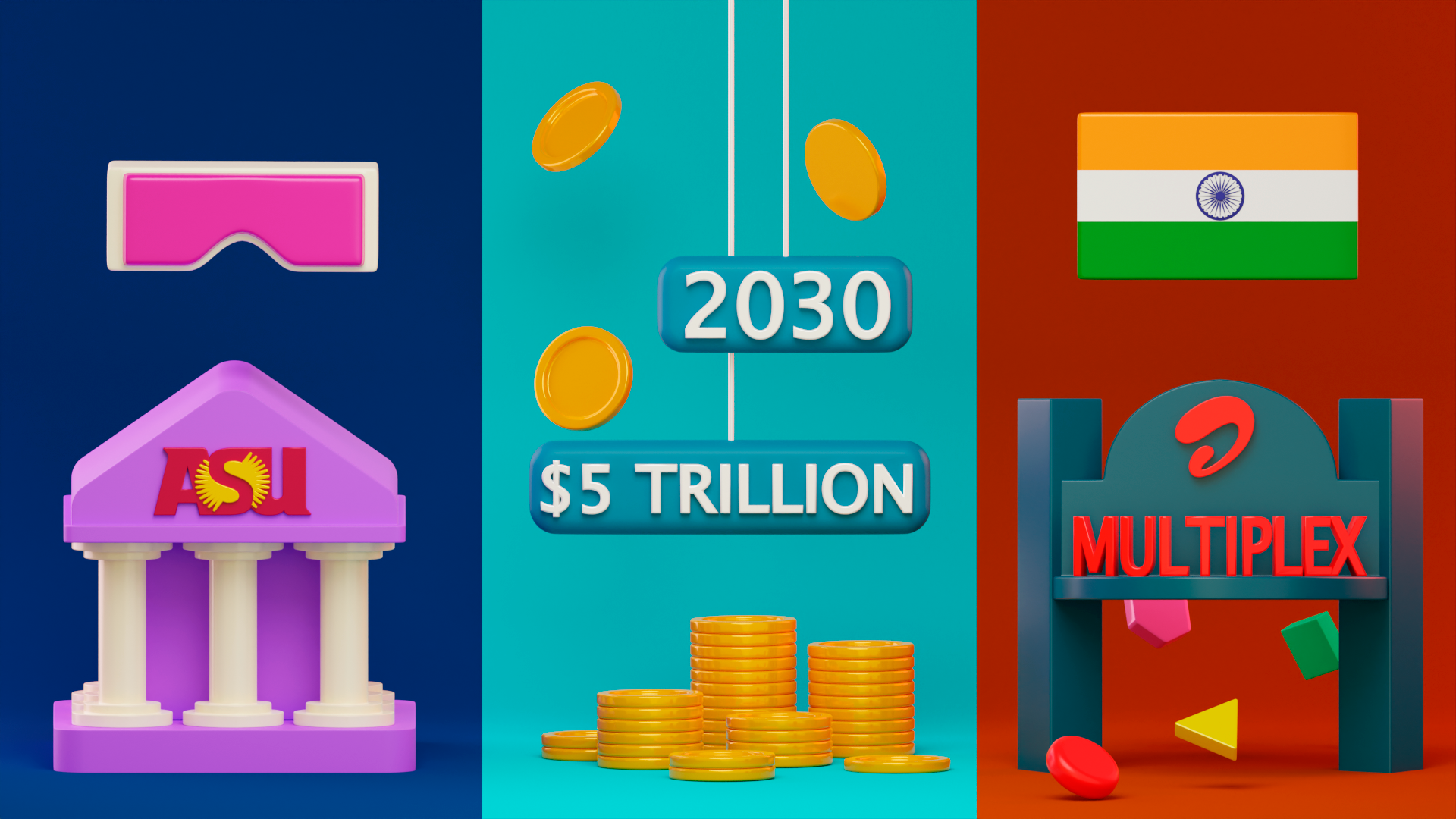 The metaverse is primed to become a trillion-dollar market according to analysts. This positive sentiment about the industry has continued to attract new players who seek to get in on the action. From India’s first multiplex in the metaverse to virtual perfumes, and Meta’s plans for a “metaverse academy,” the past week has been quite eventful for the industry. Here’s a rundown of some of the top stories over the past week.

Metaverse NFTs See Strong Bounce Across the Board

Checking out Nansen’s Metaverse-20 Index, we see that floor prices of the top 20 Metaverse NFT collections have seen a nice rebound the past week and for a few of them, the last 24 hours. The top 3 movers being The Lobstars, RTFKT Pod X and Meebits. Perhaps the most interesting of the 3 is Meebits which saw a 34% increase in its floor price the last 24 hours. The run up is likely due to news of Noah Davis, formerly part of Christie’s NFT team, joining Yuga Labs to steward the CryptoPunks brand.

Diving deeper into the collection on Nansen’s NFT God mode, which allows users to analyze and do deep dives on specific NFT collections, we see significant increase in interest in the collection. Trading volume has gone up 245% and number of transactions 250% compared to the previous day.

The data from NFT God mode shown above is available for free for all Nansen Lite users. If you’re interested in doing your own deep dives, sign up for an account today!

Metaverse Market To Reach $5 Trillion by 2030

About two months ago, analysts from Citigroup released a report that the metaverse economy could grow to $13 trillion by 2030. Despite the significant traction the sector has gained of late, a new report from international consulting firm McKinsey & Company has given a more conservative figure.

McKinsey predicts that the metaverse could reach $5 trillion in value by 2030, adding that consumer spending will likely revolve around five key areas – gaming, socializing, fitness, remote learning and commerce.

Following the survey of 3,104 consumers in 11 countries, McKinsey notes that nearly 60% of the respondents prefer at least one activity in the metaverse compared to its physical counterpart. Furthermore, 79% of consumers that are already active in the metaverse have already purchased virtual goods, while another 78% have either played social games or attended virtual events.

As expected, the metaverse had continued to attract investments from private equity firms and venture capital. In the first five months of 2022, the sector has seen more than $120 billion in investments, more than double the $57 billion from all of last year. Meanwhile, 25% of the executives on the survey said they expected the metaverse to drive up to 15% of their organization’s total margin growth within the next five years.

Elsewhere in East Asia, the Shanghai Commission of Economy and Informatization said that its metaverse industry revenue could hit 350 billion yuan (US$53.8 billion) by 2025. The local industry regulator believes this growth will be fueled by a special industry fund and expanded applications of the metaverse tech in areas like medicine, entertainment and culture. Notably, Shanghai will create a 10-billion-yuan metaverse industrial fund and open two metaverse industrial parks in Zhangjiang in the Pudong New Area and Caohejing in Xuhui District.

According to the regulator, the metaverse is expected to boost the region’s software, information services and electronics manufacturing industries, fueling a digital economy in the post-pandemic era.

Authorities are planning to have 10 leading metaverse firms with global influence and more than 50 related applications in the manufacturing, commercial, cultural and office sectors.

Shanghai’s foray into the metaverse does not come as a surprise. Earlier this year, it became the first city nationwide to include the metaverse in its long-term plans. Its five-year development plan seeks to boost the “application of the metaverse in areas such as public services, business offices, social entertainment, industrial manufacturing, production safety, and electronic games.”

Away from its metaverse plans, officials revealed that Shanghai has plans for a digital economy, as well as green, low-carbon, and smart terminals by 2025.

India’s telecom giant Airtel is following in the footsteps of MTN to establish a presence in the metaverse. Bharti Airtel has launched India’s first multiplex on the Partynite Metaverse platform as an extension of its Xstream Premium offering.

Airtel’s Xstream Premium is an aggregation-based streaming service. It collects content from 15 Indian and global video OTT players on a single app, giving customers access to over 10,500 movies, shows and live channels. Within 100 days of its launch, the service achieved a milestone of 2 million subscribers.

The Xtream multiplex will feature a 20-screen platform that will allow users to access content portfolios from Airtel’s OTT partners available on the app. It will support the sampling of original shows and movies with pieces such as the first few minutes of a movie in regional languages or the first episode of an OTT original. Viewers will also be able to gain full access by subscribing.

“Airtel’s Xstream multiplex provides a larger-than-life experience, which brings together Web 3.0 apps and immersive storytelling, and an assortment of content from our partners. We all know people’s love for movies and entertainment in India. Through the metaverse, we are looking to tap into a larger audience, giving content enthusiasts an opportunity to sample Airtel’s Xstream Premium offering and, thus, aiding in driving higher adoption.”

The metaverse idea was conceived by Essence, Airtel’s integrated media agency, and developed by the blockchain-based digital parallel universe company Gamitronics. Commenting on the deal, Rajat Ojha, the founder of Partynite (Gamitronics) said:

“We are delighted to partner with Airtel and bring alive India’s first multiplex in the metaverse. Airtel Xstream Premium’s multiplex experience is one of the most scalable use case scenarios for the metaverse. Future opportunities here include movies, music, live events and premium sports streaming. Apart from the robust scope, it will also allow social engagement, open up newer methods of content delivery and, of course, provide an immersive experience at the core of it.”

From office meetings to parties and even weddings, a lot of basic interactions are expected to move to the metaverse over the next few years. The nascent tech has caught the attention of players in multiple industries like fashion, food and beverage, entertainment, sports, and governments. Now, Arizona State University (ASU) is looking to enter into the metaverse.

The institution has reportedly filed applications for seven trademarks with the United States Patent and Trademark Office in relation to several metaverse-based products and services.

Trademark attorney Josh Gerben first disclosed the filings, tweeting that “Arizona State University has big plans for the metaverse and Web3.” In particular, the university wants to host classes in a virtual environment, use digital collectibles for sports highlights, as well as tap on NFTs for event tickets, authentication of documents, and artwork of campus landmarks.
The trademark filings, which were submitted on June 7 and June 8, reveal that ASU wants to utilize its name and the logo of its sports team Sun Devils in “virtual environments in which users can interact for recreational, leisure or entertainment purposes.”

Nike-Owned Rtfkt Studios Is Bringing Fragrances to the Virtual World

RTFKT Studios is now setting its eyes on an even bigger fish – virtual perfumes. The virtual sneaker maker is teaming up with luxury fragrance brand Byredo on a series of digital perfumes called Alphameta.

The initiative draws its inspiration from video game potions and will allow users to adorn their RTFKT Clone X avatars with a luxurious whiff of virtual aroma. Although users cannot smell the metaverse perfume in real-life, a total of 26 different ingredients can be used to create a new aroma, with each conveying a different feeling like harmony, virtue, acuity and naivety.

Users are encouraged to get their hands dirty and create personal versions of their scents based on their emotions. There are up to 2,000 custom scent combinations using the NFT ingredients. It gets more interesting as these NFT ingredients will eventually be used to create a real-life bottle of personalized perfume.

Each custom-made perfume will be equipped with a numbered NFT-connected near-field communication (NFC) tag that will mark it as a digital collectible.

Meanwhile, the official release date of the virtual and IRL custom-made perfumes is yet to be announced. In the meantime, your RTFKT Clone X avatar will have to remain scentless.

In collaboration with a French digital training firm, Facebook’s parent company Meta is planning to launch a “metaverse academy” in France for the new academic year.

The goal of the academy is to train about 100 students for free in its first year. The training will revolve around two core areas - support and assistance technicians, as well as specialist immersive technology developers, Meta’s vice president for southern Europe Laurent Solly told reporters.

The metaverse academy, located in Paris and other cities including Marseille, Lyon and Nice, will train 20 students per city every year. Learning will also involve in-person training, with a focus on metaverse and 3D interactions, Frederic Bardeau, the co-founder of Simplon, the French firm working with Meta.

Despite the expected short-term losses, Meta has continued to push its metaverse dreams. The company had previously disclosed its intention to create 10,000 jobs in Europe over the next five years to build the metaverse. According to Meta and Simplon, about 80 percent of the careers that will exist in 2030 are yet to be invented. As a result, there is a need to develop training schemes linked to the metaverse now.

Leading internet media company Yahoo is planning to launch a series of metaverse-based projects in Hong Kong. According to Lorraine Cheung, head of audience of Yahoo Hong Kong, the company views the metaverse as an attractive alternative for residents of Hong Kong to engage in social activities in the face of COVID-19 restrictions.

“We hope to use the Metaverse to connect people regardless of time and physical location.”

As part of the initiative, Yahoo will launch an NFT exhibition dubbed “The Abyss of Kwun Tong.” This will see local artists virtually recreate the historic neighborhood of Kwun Tong, which has been heavily affected by redevelopment. Creative producer Leung Ching-Hsuan said that the NFT exhibition is aimed at retaining “humanity using technology.”

Crypto News
Weekly Roundup: What Happened in Play2Earn Games and NFTs This Week? [Oct. 8, 2021]
In this weekly roundup, CoinMarketCap takes a look at some of the most prominent Play-to-Earn and NFT events, from Dolce & Gabbana's foray into the NFT space, to the boom in CrypToadz NFTs.
โดย Andrey Sergeenkov
11 months ago
9ในการอ่าน
Crypto News
Crypto News, May 2: Bitcoin's Worst April Since 2013, Solana Chaos, Smartphone Seed Phrase Alert
Also today, Coinbase is changing the way it announces new coin listings... amid fears some traders are managing to buy these assets before an announcement is made.
โดย Connor Sephton
5 months ago
4ในการอ่าน
Crypto News
Podcast: Bitcoin Bloodbath — and OpenSea Discord Hacked
Also today… Coinbase NFT opens for the public in beta, and Starbucks is going to release NFTs later this year.
โดย Connor Sephton
5 months ago
1ในการอ่าน
See all articles