Also today, Coinbase is changing the way it announces new coin listings... amid fears some traders are managing to buy these assets before an announcement is made. 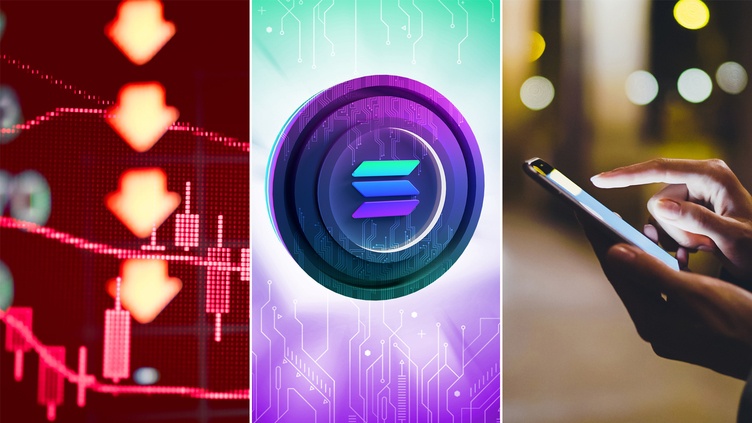 A bad weekend for Bitcoin 📉

Bitcoin has rebounded after falling off a cliff in the run-up to the monthly close. Saturday night saw the world's biggest cryptocurrency hit lows of $37,585, CoinMarketCap data shows. According to Coinglass, the world's biggest cryptocurrency fell by 17.3% last month — its worst April performance since 2013. There's growing nervousness as the Federal Reserve's Open Market Committee gathers for a key meeting on Tuesday and Wednesday. Economists are expected to raise the base interest rate by half a percentage point — and an increase of this size hasn't been seen in 22 years. BTC is flat over a seven-day timeframe, but many altcoins are nursing double-digit losses.

Another week, another Solana outage 💔

Solana suffered a seven-hour outage over the weekend — the embattled blockchain's seventh blackout so far this year. The Proof-of-Stake network was overwhelmed by a record-breaking four million transactions per second. This affected the production of new blocks, and it's believed bots using the NFT minting program Candy Machine were to blame. Solana Labs co-founder Anatoly Yakovenko was accused of being "MIA" — missing in action — after falling silent while the crisis unfolded. SOL plunged by more than 10% in a matter of hours on Saturday night as the chaos unfolded — hitting lows of $82.91. Repeated outages have put Solana's reputation as an "Ethereum killer" into doubt, with some traders warning the blackouts mean this network is too unreliable.

Warren Buffett has declared that he wouldn't buy all of the Bitcoin in the world for $25. At Berkshire Hathaway's annual shareholder meeting, the billionaire warned the world's biggest cryptocurrency doesn't produce anything tangible. To laughter from the crowd in Nebraska, the 91-year-old added: "What would I do with it? I'd have to sell it back to you, one way or another. It isn't going to do anything." Berkshire Hathaway's vice chairman Charlie Munger went one further — describing BTC as "stupid" and "evil."

Coinbase is changing the way it announces new coin listings — amid allegations some traders used this information to make a profit. Last month, the exchange revealed which altcoins were under consideration for a listing. But allegations emerged that one trader had bought large quantities of the coins mentioned in this blog post… 24 hours before it was published. They ended up making tens of thousands of dollars. It's unclear whether they gained access to the confidential list before it was made public… or if they connected the dots by closely monitoring on-chain activity. Coinbase's CEO Brian Armstrong says the exchange will only make an announcement once it has definitely decided to list an asset — and warned the company has "zero tolerance" for employees who leak information to outsiders.

How your phone could guess your seed phrase 🚨

Your smartphone could be your worst enemy in the quest to keep crypto safe. A user on Reddit claims his Android device managed to guess his private key — and this could be advantageous to criminals. Seed phrases consist of 24 random words — and they need to be repeated in order for users to access their digital assets. As u/Divinux explained: "Predictive typing remembers your used words and will suggest the second word as soon as you type the first one, especially if it's a word you don't commonly use." A top tip for staying safe includes clearing your predictive text cache — preventing the smartphone from remembering distinctive words.

An investor who bought a crypto domain for $16 claims he's now managed to sell it for $435,000. In a Twitter thread, @cryptofelon revealed he was approached by GoDaddy, who said a "multibillion-dollar" exchange was interested in buying the website address for $500. He turned them down — and insisted on being paid 10 BTC. The shrewd negotiator managed to hold his nerve through weeks of talks — and even turned down $200,000 at one point because he "knew his worth."

The Wikimedia Foundation has announced that it will no longer accept crypto donations. Wikipedia's parent company had first started accepting Bitcoin all the way back in 2014 — as well as Ether and Bitcoin Cash in later years. But in a new statement, the organization said it was pulling the plug after receiving feedback from volunteers and donors… and closing its BitPay account. It follows a three-month discussion within the Wikimedia Foundation's community, which included a poll that asked whether support for crypto donations should be withdrawn. Although just 326 people took part, 71% voted yes — indicating there was "strong support" to ditch crypto altogether. Data suggests that, over the whole of 2021, just 0.08% of the foundation's revenues actually came from crypto donations — and in any case, the digital assets it received were immediately converted into cash.
12 people liked this article

Crypto News
Two Men Who Conned Crypto Investors Out of $1.9M in ICO Jailed
Years after the initial coin offering craze, jail sentences are starting to be handed down to criminals who conned investors out of millions.
โดย Connor Sephton
1 week ago
2ในการอ่าน
Crypto News
Ransomware Attacks Are Falling, But a Different Crypto Crime is Surging
The cybersecurity firm SonicWall says incidents of cryptojacking have surged by 30%, and experts believe this is a sign that some ransomware operators "are ready for a quieter life."
โดย Connor Sephton
2 weeks ago
2ในการอ่าน
Altcoins
Ultra-low Fees on EVM-compatible Chains: Have It Held Up?
A look at the top EVM-compatible blockchains and whether transaction fees have remained low as promised.
โดย Daniel Phillips
4 months ago
3ในการอ่าน
See all articles