Cosmos brands itself as the “internet of blockchains.” Learn more about the recent Cosmos 2.0 upgrade, changes to the ATOM tokenomics and some of the top ecosystem projects on Cosmos. 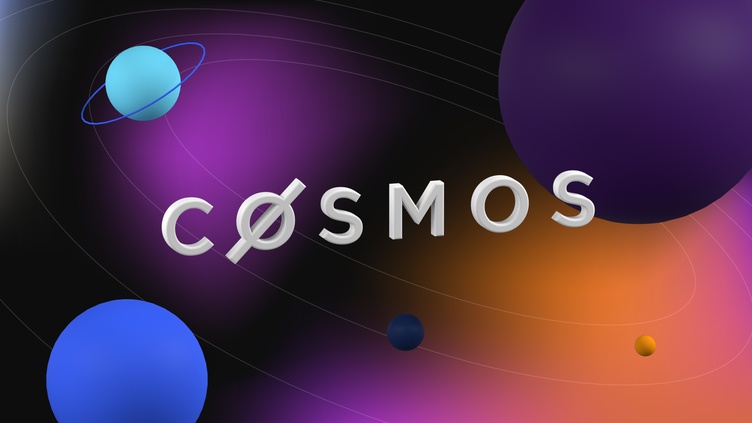 Cosmos is a layer 0 blockchain. Put simply, Cosmos is the infrastructure that allows to connect several layer 1 blockchains like Osmosis, Cronos, Evmos, Kava, and soon dYdX in a network of blockchains. These blockchains communicate through the Inter-Blockchain Communications (IBC) protocol, with the Cosmos Hub and its ATOM token being one of the blockchains in this network.
Thus, instead of scaling linearly (like monolithic chains such as Solana) or with modularity (like Ethereum is trying by separating the execution layer and settlement layers), Cosmos scales by allowing different blockchains to communicate in a trust-minimized way. Each blockchain (or hub) can connect with different hubs in an archipelago of blockchains. Furthermore, each blockchain can have its own application-specific blockchains, or app-chains (called zones in the Cosmos ecosystem) to scale its hub.
Read: Modular vs Monolithic Blockchains: What’s the Difference?

In contrast to monolithic layer-one chains, Cosmos envisions a platform that exchanges, stores and secures value in a decentralized manner — promoting collaboration, innovation and competition. For this reason, Cosmos has chosen to build by using a modular software stack — the Cosmos SDK — and a web of interconnected blockchains. This allows the hubs and zones in the Cosmos ecosystem to spin up new blockchains with custom execution environments while leveraging the IBC for cross-chain communication.

This vision of modular and autonomous growth has led to a fast increase in the number of zones on Cosmos. At the time of writing, there are 49 active zones.

Central to the IBC protocol are the Cosmos software development kit (SDK) and the Tendermint Core consensus mechanism.

The open-source Cosmos SDK helps build application-specific blockchain from scratch, allowing it to interoperate with other blockchains. Put briefly, first you need to build your custom blockchain with a mix of prebuilt modules and custom modules. The next step involves testing your MVP with users and collecting and iterating on feedback, before subsequently launching on the mainnet. Finally, the blockchain can be connected to other Cosmos blockchains, leveraging the core interconnectivity property of the network. It helps increase the adaptability and liquidity of any blockchain by linking it to the Cosmos Network via IBC.

The Cosmos Hub and ATOM

Cosmos is usually associated with the ATOM token. ATOM is the native token of the Cosmos Hub, which is but one zone in the Cosmos ecosystem. Roughly speaking, ATOM functions like ETH in that it secures the Cosmos Hub and is used to pay for gas.

However, since other hubs can have their own validators and native tokens, the Cosmos Hub and ATOM token were not necessarily needed in the IBC and the token did not accrue value. As a result, the protocol fees (in other words, revenue generated by Cosmos) are minuscule. This minimalist approach of keeping the ecosystem as lightweight as possible resulted in frustration for ATOM holders.

This issue is being addressed with the Cosmos 2.0 update.

Cosmos released its Cosmos 2.0 white paper at the Cosmosverse conference in Colombia in September 2022. It sketches a three-year roadmap with significant changes to the Cosmos ecosystem, giving the Cosmos Hub greater utility, improving the tokenomics, and addressing weaknesses in the Cosmos ecosystem.
The four key innovations are:
The Cosmos Hub will have a new role in growing a resilient interchain economy. It will secure and capitalize critical apps in the ecosystem and act as its entry point and communication center.

Liquid staking is the process of wrapping staked tokens to use them as collateral across a blockchain’s ecosystem and improving capital efficiency.

In Cosmos 2.0, ATOM stakers will be able to use their staked tokens across the Cosmos ecosystem. This incentivizes staking on Cosmos, which over the long-term will change ATOM issuance from an inflationary to a deflationary model.

The Interchain security puts the Cosmos Hub at the center of the ecosystem’s security model.

While other zones (app-chains) retain the option to have their own validators, they will be able to rent security from the Cosmos Hub validators. This enables smaller app-chains to defend themselves against validator attacks while retaining decentralization.

The Cosmos Hub gets paid in the chains’ tokens and fees, 25% of which will go to ATOM stakers. This feature will launch in January 2023.

The Interchain scheduler is a cross-chain marketplace for blockspace, tackling the MEV problem. App-chains will be able to trade blockspace in the form of tokenized NFTs, thereby allowing users to execute block transactions in a trust-minimized manner.
Since the IBC is an asynchronous system of many different blockchains, MEV has been a major problem. For instance, Osmosis alone has leaked more than $6.7 million to arbitrage bots in value since its genesis in June 2021.This upgrade will allow rights to order transactions for a future block to be tokenized, traded and transported.

This will provide new Cosmos projects with a more efficient path to user acquisition, liquidity and ecosystem alignment. As such, Cosmos Hub will align incentives between ATOM holders and DAOs and participate in incentivizing the funding of new public goods for the ecosystem. The goal is to make ATOM the most desirable and widely deployed reserve asset in the IBC protocol.

One of the biggest shortcomings of the existing tokenomics was the inflationary issuance of ATOM, while incurring little value accrual to the token.

The whitepaper laid out a new issuance model, which will gradually see the number of tokens minted over time decrease.

There are two phases: in the first month, 10M ATOM will be released, which will gradually decrease over the next 36 months. Eventually, issuance will settle at an equilibrium of 300,000 ATOM per month.

Two-thirds of the newly issued ATOM tokens will go towards the Cosmos treasury to support initiatives that increase adoption, growth and capitalization of the interchain.

A portion of the transaction fees will also go towards the Cosmos treasury, thereby enabling a positive flywheel of treasury growth and token value growth fueling each other. In doing so, ATOM is to become the interchain reserve currency.

Cosmos has a rich and fast-growing ecosystem. These are some of the biggest projects that are part of Cosmos.

Osmosis (OSMO) is an automated market maker enabling cross-chain trading in the Cosmos ecosystem. It is the liquidity hub with a peak TVL of almost $2 billion. Osmosis is connected to 45 other zones in the ecosystem, making it the most connected hub even ahead of the Cosmos Hub. For the future, Osmosis is planning to add new features like NFTs, order books and lending functionality.

Axelar (AXL) supports cross-chain transfers and composability of applications between different blockchain ecosystems. Built with the Cosmos SDK, Axelar enables the translation of messages between networks, such as translating messages from Ethereum to the IBC standard and vice versa. Axelar also functions as the front end for bridging from and to Osmosis.
Axelar supports 15 blockchain and is tipped as the “Hub for non-IBC assets,” thanks to being the main issuer of non-IBC assets in the ecosystem. For instance, Axelar issues USDC on IBC, which is not an IBC-native asset.

Juno (JUNO) is a layer-one blockchain with a cost that is reportedly up to 35,000 times cheaper than other layer-two blockchains. It uses the CosmWasm framework to deploy smart contracts, thereby facilitating interoperability with all networks in the Cosmos ecosystem.
Juno boasts more than 50 DApps and 2,000 DAOs, covering all subsets of the blockchain space like gaming, decentralized finance (DeFi), non-fungible tokens (NFTs) and privacy tools. Interestingly, Juno is completely community-owned and had no seed sale, private sale, or public sale. Instead, 47% of the genesis supply went to ATOM stakers.

Evmos (EVMOS) is a EVM-compatible layer-one chain, which aims to be the “EVM hub” of IBC. Protocols can build applications for both Evmos and Ethereum but enjoy the increased speed and modularity of the IBC ecosystem. Thanks to using the Cosmos SDK, applications can seamlessly interact with other protocols that are part of the IBC network.
You can read more in our deep dive into Evmos.

dYdX (DYDX) is a decentralized exchange (DEX) for perpetual future contracts. It offers deep liquidity, no fees and up to 20X leverage. dYdX is built on a Ethereum layer-two solution —Starkware — but decided to build a Cosmos app-chain for its v4 version.
The protocol announced the change on its blog, citing a need for full decentralization and higher throughput to deliver the best possible performance.
You can read more in our deep dive into dYdX and our guide to the Starkware ecosystem.

Celestia is a modular blockchain network that outsources all the components of a traditional blockchain like execution, settlement, consensus and data availability to a separate chain.

This allows anyone to deploy a blockchain, without having to worry about how to set up a consensus network. Celestia orders and publishes transactions but does not execute them.

With this security-on-demand approach, developers can choose what execution environments they prefer (EVM or another) and update applications without forking the main chain.

Celestia is in early stages of development — mainnet is scheduled to go live in 2023 and the team plans to launch a token to secure the network via PoS.

Sei is a DeFi-focused layer-one chain specifically designed for trading. It boasts 600ms transactions finality and up to 22,000 orders per second.

Labeling itself the “decentralized NASDAQ,” it focuses on exchanges with a native order matching engine, frontrunning protection and multiple levels of order bundling.

Kujira (KUJI) is a layer-one chain for community-selected projects aiming to build real value. Its current standout products are FIN, an order book-style DEX, and Orca, a public marketplace for liquid collateral.
Kujira aims to become a hub of high-quality protocols with a focus on DeFi.

Secret Network (SCRT) is a blockchain with customizable privacy.
Smart contracts on Secret hide the data from the nodes, allowing users to control the access to their assets and data on the chain. Secret NFTs allow their holders to set the ownership of their NFTs to private, allowing creators to selectively reveal content and ownership without giving up control of their data.
This article contains links to third-party websites or other content for information purposes only (“Third-Party Sites”). The Third-Party Sites are not under the control of CoinMarketCap, and CoinMarketCap is not responsible for the content of any Third-Party Site, including without limitation any link contained in a Third-Party Site, or any changes or updates to a Third-Party Site. CoinMarketCap is providing these links to you only as a convenience, and the inclusion of any link does not imply endorsement, approval or recommendation by CoinMarketCap of the site or any association with its operators. This article is intended to be used and must be used for informational purposes only. It is important to do your own research and analysis before making any material decisions related to any of the products or services described. This article is not intended as, and shall not be construed as, financial advice. The views and opinions expressed in this article are the author’s [company’s] own and do not necessarily reflect those of CoinMarketCap.
16 people liked this article