How Blockchain and AI Can Benefit Robotics — and Vice Versa

Blockchain could be used in areas that requires complicated logistics or a high level of reliability. 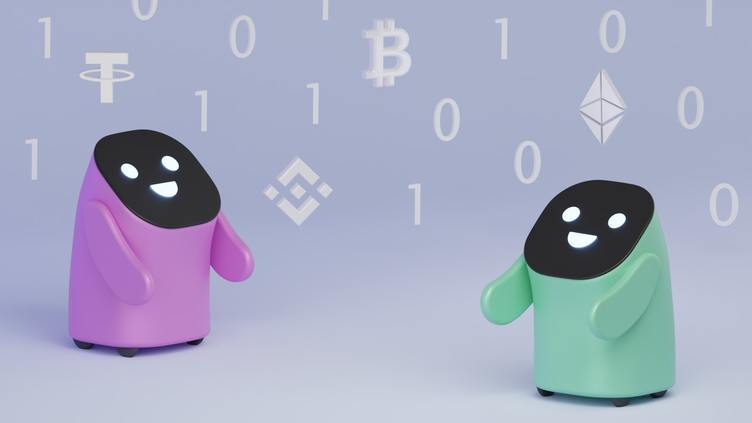 Swarm robotics is a science field aimed to entice a collective behavior of naturally occurring systems. Imagine a swarm of bees where each creature has a specific function and adds to the overall big picture of typical behavior. That’s what the scientists are trying to recreate in the laboratories, uniting multiple robots and teaching them to interact with each other, the same as birds or bees would. Swarm robotics can be used in many areas, including surgeries, rescue missions, or environment monitoring. And blockchain, when combined with the revolutionary world of artificial intelligence, can boost the area with its decentralized tools. Today we are going to discuss how exactly swarm robotics can benefit from the main technology beyond crypto.
Подпишитесь сейчас

A blockchain is a digital ledger where digital records on particular actions, such as transactions, are stored in multiple blocks. As soon as the transaction is verified and added to a block, it can’t be erased or changed. Moreover, the history of records can be seen by every user, which makes it a highly transparent technology.

The blockchain runs on distributed ledger technology (DLT), which is a decentralized digital records database. Each participant of this database, as mentioned above, can check all of the transactions or data recorded on the distributed ledger. The members of the blockchain own an identical copy of the data on the shared network, making it nearly impossible to make unnoticed changes to the database.

What Are the Main Challenges Behind Blockchain?

Blockchain could be used in each area that requires complicated logistics or a high level of reliability. But why then has it not yet been used during the government elections across the world or, for instance, to trace containers in heavily-loaded docks? Let’s briefly discuss the main issues that blockchain has.

Blockchain-related operations are ridiculously costly. Crypto mining equipment is what keeps a blockchain running, and to buy it you have to break the bank. Crypto mining rigs are, therefore, usually a part of a huge fleet owned by a large crypto company. High costs make it extremely hard for individual researchers to work with the blockchain.

As mentioned above, crypto mining systems that keep a blockchain running are normally organized as thousands of miners installed at a facility. This not only occupies a lot of space in your office but also makes it hard to transfer the equipment. Even individually established mining rigs are burdensome and in case of mechanical issues are extremely difficult to move from one place to another.

There is an alarming number of blocks on each decentralized infrastructure. Each of them contains its data, codes, records, receipts, and a plethora of complex information. Every minute on Earth a new cryptocurrency is created and added to a new blockchain for circulation or a new project is launched using a decentralized ledger. This outbreak of data, although relatively safe, is still vulnerable to security issues as there are not enough resources to guard each bit of private data separately. With the waves upon waves of data running through the blockchain, it’s not that far-fetched to think that the transaction receipts or ledgers can sometimes be tampered with by hackers.

Cryptocurrency mining rigs leave behind a heavy carbon footprint. Although many companies attempt to use hydroelectric energy or windmill facilities in an attempt to power the system, it is still a massive expenditure of money.

Although cryptocurrency has a history of more than 10 years, it is still out of the mainstream. This has created a talent gap in the space where the number of IT staff familiar with blockchain is significantly lower than the market demand.

What Is Artificial Intelligence?

Artificial intelligence is creating machines that can mimic human intelligence. Its goal is to develop products as smart as, or even much smarter than humans so that the issues that are beyond the realm of human abilities could be solved. To understand how blockchain can help AI, let’s focus on the main challenges in this area.

What Are AI’s Main Challenges?

The main thing that differentiates us from animals (and robots) is our ability to distinguish between right and wrong, to understand complex abstract concepts, and abide by moral codes. That is, to be rational. Artificial intelligence fails to replicate this way of thinking. This can lead to massive complications, especially since AI is actively used in warfare technology.

Same as with blockchain, the budgets for implementing AI technologies can be immense. Even the Big Tech companies are sometimes struggling to pay for it. In addition to that, let’s not forget the extremely costly (and not that numerous) workforce that is required to deal with AI.

One of the most innate flaws of machines is that there is always a high risk of lagging, and AI can bear a part of the responsibility for that. When the incidents arise, it is also hard to investigate whether it was because of a user, developer, or manufacturer.

Unmanned navigation, such as the autopilot mode in cars, fails to function as precisely as human one. Sometimes it ignores obstacles and provokes accidents, which makes AI navigation unreliable so far.

How Can Blockchain, Robotics, and AI Cooperate?

AI simulates human intelligence, and robotics imitates human actions. When combined, the two can significantly decrease the amount of human labor. In particular, it relates to the time spent on simple tasks, like taping up boxes or bolting details together. Swarm robots could deal with those tasks effectively.

One of blockchain’s main goals is to reduce time and costs, too. Same with AI: as it evolves, it can perform any type of boring job, whereas the human workforce can be used for more complex tasks. Three different tech industries, therefore, share a similar aim. Let's have a look at how merging blockchain, swarm robotics, and AI technologies can solve the challenges in these fields to give us a better net product.

So far blockchain technology provides us with a great ecosystem to deal with finance (crypto and tokens). As we discussed above, one of its key advantages is secure transaction approval within the blockchain. Therefore, one possible use case is to delegate approving the blocks to the robots. Or the robots can communicate one with another during the work process using public and private keys to evade human control and mistakes.

The blockchain is already doing great with transparency and security, as information contained in blocks is really hard to alter. However, could it be even more efficient with the help of AI? Imagine a pattern that detects hackers. Or a neural network that detects double spending automatically.

Going even further, AI and robotics could help blockchain by replacing the limited workforce in the area. Just for a moment, think of robotic Bitcoin miners that approve transactions way faster than humans. Could that be a solution to speed up the transactions and reduce energy usage, too?

Blockchain can help AI with difficult tasks, such as moral choices that represent a huge issue for robots. Mining rigs can solve complex computational issues, which, combined with the speed of AI, can create self-thinking robots and further decrease the amount of human verification in robotics.

To sum up, blockchain can enhance the functions of robotics by providing decentralization to create a self-regulating ecosystem. In the fields where computation is required, AI and blockchain mixed could bring to life robots that solve complex mathematical equations efficiently. This will significantly lower the overall costs and bring in more profit.

Crypto Basics
3 Minute Tips: The Different Types of Decentralized Exchange (DEX)
The DEX landscape is as varied as it is vast, however, there are three major types of DEXs that you should know about before choosing the best platform for your needs.
Автор: Daniel Phillips
10 месяцев назад
4м
Blockchain
Adidas Teams Up with Coinbase... But For What?
The popular sportswear brand announced the news on Twitter, mischievously adding: "Probably nothing."
Автор: Connor Sephton
8 месяцев назад
2м
Crypto Basics
Best Crypto Apps in Indonesia
CoinMarketCap takes a dive into the best apps for checking crypto prices in Indonesia.
Автор: Werner Vermaak
год назад
3м
Все статьи