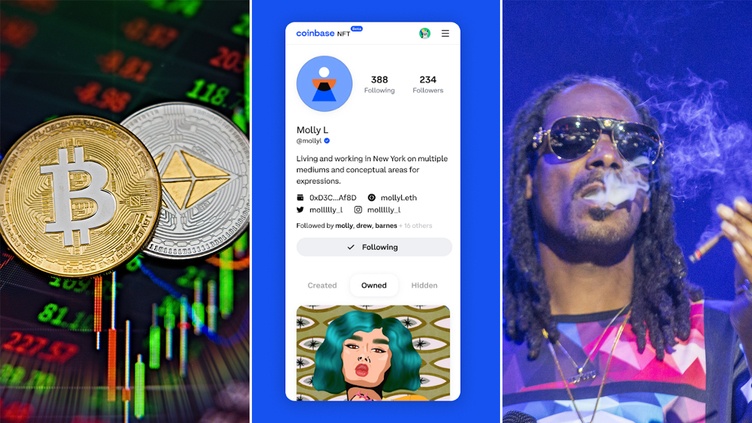 Bitcoin will hit highs of $81,680 this year and drop to $65,185 by December, according to a panel of 35 fintech and crypto experts. According to Finder, the specialists are also especially bullish in the long term — and believe BTC will be worth $179,280 by 2025, and $420,240 by 2030. But it isn't all good news for the world's biggest cryptocurrency, as 50% of those polled believe Bitcoin's network will eventually be overthrown by a more advanced blockchain. University of Canberra senior lecturer John Hawkins believes Ethereum will become the top dog in the years ahead — and as a result, BTC will plummet to $5,000 in 2025 and just $100 in 2030.

Will demand for digital weed get high? 🔥

Snoop Dogg has announced that he's going to start farming digital weed in the metaverse. The American rapper — and his son Champ Medici — have entered into a partnership with Mobland, which describes itself as "the first-ever mafia metaverse." While owners won't be able to feel the physical effects of this virtual marijuana, they'll certainly be hoping that prices get high. In a rather tongue-in-cheek quote, Champ Medici said: "I saw my father play video games my whole life. Cannabis and game controllers live hand in hand with him, that's why I think it’s no brainer to bring the metaverse and digital weed together."

The beta version of Coinbase NFT has been released. A small number of users from its waitlist can now start buying and selling crypto collectibles. Transactions are going to be free for a limited time. The exchange's VP of product says users will be able to create a profile and decorate it with their favorite pieces of digital art. They'll also have the chance to follow other accounts, and comment on specific non-fungible tokens. New features are also in the pipeline — including exclusive drops and the ability to purchase NFTs with a credit card. Another interesting feature will see Coinbase NFT users given personalized recommendations on sales they might be interested in — and engaging in the marketplace by making purchases or following profiles will increase its accuracy.
16 people liked this article

Crypto News
Crypto Project Fails to Buy Constitution at Auction
ConstitutionDAO was confident it had enough funds to snap up the historic document, but had to throw in the towel once bids exceeded $40 million.
Автор: Connor Sephton
10 месяцев назад
2м
Crypto News
Ethereum’s London Hard Fork Goes Live
An important step on the road to Ethereum 2.0, London’s EIP-1559 makes important changes in the way gas fees are calculated, and what is done with them.
Автор: Leo Jakobson
год назад
2м
Crypto News
News Roundup, Nov. 22: A Volatile Start to the Week
Bitcoin suddenly surged $2,500 on Monday before pulling back. Plus, El Salvador is planning to build "Bitcoin City" — and SHIBA INU issues a scam alert.
Автор: Connor Sephton
10 месяцев назад
3м
Все статьи