Bitcoin has wiped all of its gains from the past 18 months — and things might be about to get even worse. 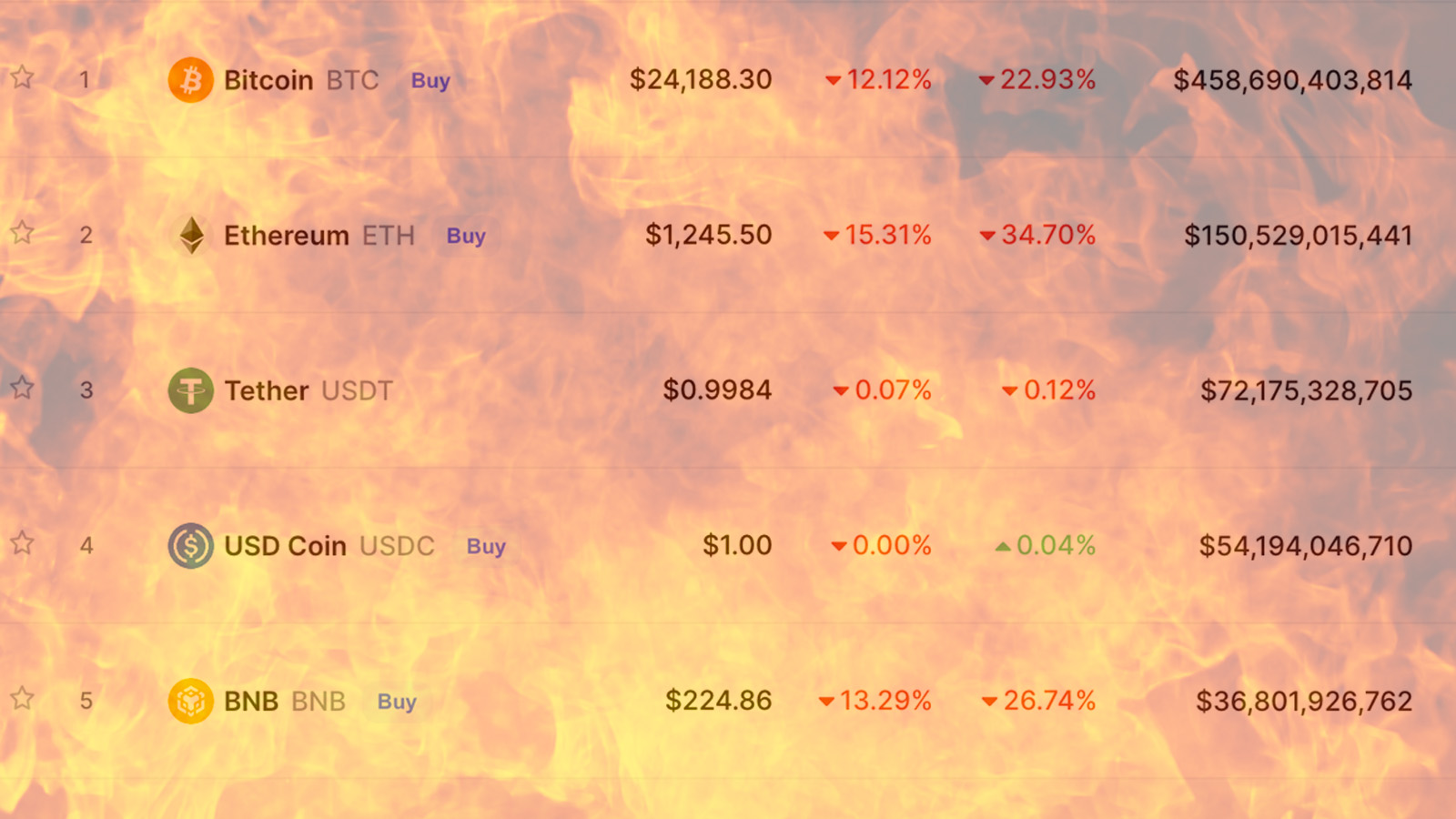 Bitcoin has fallen below $24,000 — taking prices to a level not seen since December 2020. It's down 13.6% on the day at the time we're writing this… and has plunged 24% in a week. Things are looking even worse for Ether — down 18% in 24 hours and an eye-watering 37% on a seven-day timeframe. Some smaller altcoins have lost 20% of their value in one day — and the total market cap of all cryptocurrencies is now under $1 trillion. Selloffs were also seen across global markets on Monday — fueled by fears of rampant inflation, imminent interest rate hikes and the prospect of recessions in major economies.

Adding to market nerves is news that Celsius has suspended all withdrawals, swaps and transfers. The crypto lender blamed "extreme market conditions" for the drastic move, which is designed to ensure the network can honor its withdrawal obligations over time. Executives went on to claim that they are determined to act in the best interests of the "entire community" — and insisted customers "will continue to accrue rewards during the pause." CEL has plunged by over 50% in the past 24 hours… and parallels are now being drawn with LUNA and UST. This could be very serious, not least because Celsius claims it has 1.7 million users.

Do Kwon denies cashing out $2.7 BILLION 💰

Do Kwon is denying claims that he cashed out $2.7 billion from the Terra ecosystem. Allegations first surfaced in January that the embattled co-founder of Terraform Labs had managed to drain liquidity from LUNA and UST before both tokens collapsed. Kwon allegedly withdrew $80 million every month for close to three years by using a tool called Degenbox. On Twitter, the 30-year-old described these claims as "categorically false," adding: "I lost most of what I had in the crash, too."

Coinbase employees call for top execs to be fired 👀

Employees at Coinbase have started a petition calling for three senior executives to be removed from their roles in a vote of no confidence. Chief operating officer Emilie Choi, chief product officer Surojit Chatterjee and chief people officer LJ Brock were named. They're being blamed for "the failure of the Coinbase NFT platform" — and accused of creating a "toxic workplace culture." On Friday night, Brian Armstrong tweeted a link to the petition, and described it as "really dumb on multiple levels." He called on the employees behind the petition to "quit and find a company to work at that you do believe in."

A Twitter war has broken out between Jack Dorsey and Solana… and it all links back to a rather unfortunate typo. Dorsey inadvertently referred to the blockchain project as "Solano" as he argued that many Web3 projects are nowhere near decentralized enough. The platform decided to poke fun at him by changing its Twitter name. Dorsey made light of his mistake, quipping: "damn i'll never get the spelling of sqlana right." All of this comes after Solana was ranked the second-worst blockchain for security by DeFi Safety. In a damning report, the organization said: "We cannot advise any serious investor to use this chain."
6 people liked this article

Crypto News
Ukraine Plans Airdrop as Crypto Donations Pass $30M
Some of the crypto is being used to supply civilians with food, gas, medicine and firearms, while another wallet has been set aside to provide funding for the army.
Автор: Connor Sephton
6 месяцев назад
2м
Crypto News
CoinMarketCap Daily, June 14: Elon Tweets — and BTC Goes Up
CoinMarketCap brings you the crypto news, every day, right to your laptop.
Автор: CoinMarketCap
год назад
2м
Crypto News
El Salvador Becomes First Country in the World to Adopt Bitcoin as Legal Tender
Despite a campaign encouraging people around the world to buy $30 of Bitcoin, the cryptocurrency's price has fallen.
Автор: Connor Sephton
год назад
2м
Все статьи