a16z State of Crypto Report: We Are Still Early 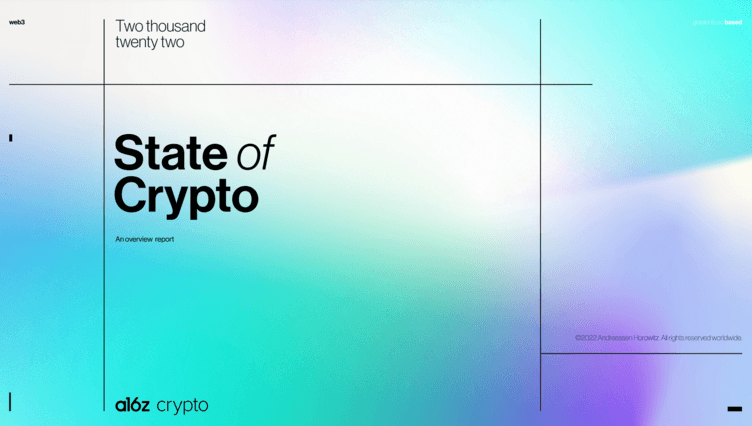 Crypto power users like to tell each other — sometimes jokingly — how early we still are.

Guess what, the State of Crypto Report 2022 by a16z just agreed with them. The report published by crypto venture capital fund Andreessen Horowitz had five key takeaways, one being that blockchain adoption is indeed still in its early stages.

According to the report, there is an estimated seven million to 50 million active Ethereum users today. Comparing this to the adoption of the internet, blockchain adoption is currently in 1995 — indeed very early (for those that remember). The one billion internet users milestone was only reached in 2005, which would mean 2031 for blockchain tech.

The report's other takeaways were no less interesting.

According to a16z, the crypto market is currently in its fourth price-innovation cycle. In contrast to other industries, prices in crypto are a leading indicator — prices jump, interest peaks, new startups start developing new ideas and executing them, and eventually, the bubble bursts, just to enter a new cycle. One indicator of this is a massive surge in social media and developer activity for cryptocurrencies.

Another takeaway was the significantly better take-rates of web3 compared the web2. While users complain about OpenSea taking 2.5%, web2 giants like YouTube and Instagram have take-rates of up to 100% — meaning users get none of the value they create. The report concluded that "Web3 is tiny but mighty."

The real-world impact of crypto is just beginning to take shape. According to a16z, DeFi as a sector is the 31st largest US bank by total assets under management. Crypto has "barely just scratched the surface of what's possible."

Finally, the State of Crypto Report 2022 sees Ethereum as the clear leader in blockchains, although it has to fight off competition. For example, Ethereum has 4,000 monthly active developers compared to Solana's 1,000 and Bitcoin's 500, although Solana is roughly tracking Ethereum's growth path.

Ethereum also rakes in the most transaction fees, meaning blockchain space on its chain is in high demand. However, high fees are also due to Ethereum's priority of decentralization over scaling, something that L2 solutions like optimistic rollups and ZK-rollups are trying to resolve. The report concludes that eventually, there will be multiple winners thanks to "a lot of room for innovation."

You can download the entire State of Crypto 2022 report here.
This article contains links to third-party websites or other content for information purposes only (“Third-Party Sites”). The Third-Party Sites are not under the control of CoinMarketCap, and CoinMarketCap is not responsible for the content of any Third-Party Site, including without limitation any link contained in a Third-Party Site, or any changes or updates to a Third-Party Site. CoinMarketCap is providing these links to you only as a convenience, and the inclusion of any link does not imply endorsement, approval or recommendation by CoinMarketCap of the site or any association with its operators. This article is intended to be used and must be used for informational purposes only. It is important to do your own research and analysis before making any material decisions related to any of the products or services described. This article is not intended as, and shall not be construed as, financial advice. The views and opinions expressed in this article are the author’s [company’s] own and do not necessarily reflect those of CoinMarketCap. CoinMarketCap is not responsible for the success or authenticity of any project, we aim to act as a neutral informational resource for end-users.
7 people liked this article

Crypto News
Crypto News, May 20: Tether Shows Its Books, Ethereum Shows a Merge Date
While Tether published an update with improving liquidity that should soothe nervous markets, Ethereum is continuing preparations for its Merge — which is now penciled in for August.
Автор: Ivan Cryptoslav
2 месяца назад
2м
Crypto News
Will Smith Token and NFTs Launch After Chris Rock Slap — Here's Why You Shouldn't Buy Them
One of the NFTs shows Chris Rock wincing in the immediate aftermath of Will Smith's slap, along with the word "NGMI" — Crypto Twitter slang for "not gonna make it."
Автор: Connor Sephton
4 месяца назад
3м
Crypto News
Crypto News, Feb. 28: Metaverse and Global Instability
Check what you missed over the weekend in crypto and world news.
Автор: Ivan Cryptoslav
5 месяцев назад
2м
Все статьи