Bridgewater Assets founder Ray Dalio has described Bitcoin as an "amazing accomplishment" — and his hedge fund thinks adoption among institutional investors will rise in the coming years. 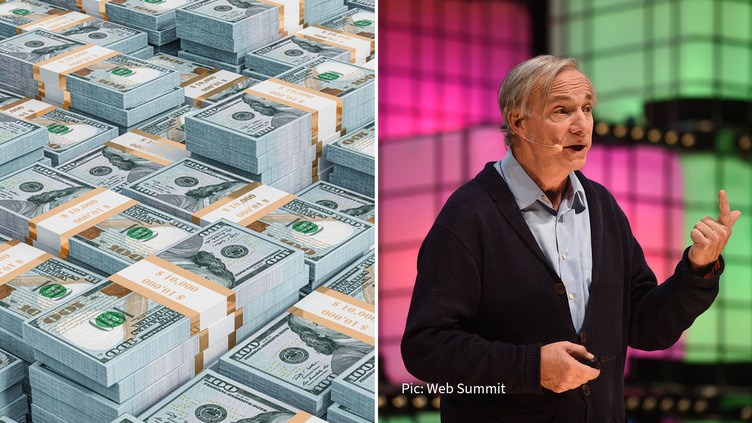 The world's biggest hedge fund is reportedly planning to start gaining exposure to cryptocurrencies — months after its billionaire founder Ray Dalio revealed that he owns Bitcoin.
Bridgewater Associates intends to back a crypto fund rather than directly invest in digital assets, according to a CoinDesk report.

This is a significant development given how the hedge fund boasts $150 billion in assets under management — and it could prompt other institutional investors to reevaluate crypto despite the current downturn.

One source told the publication that Bridgewater's allocation to crypto would be "miniscule," while four people said that the hedge fund will enter the space by the middle of next year.

Back in January, analysts at Bridgewater had predicted that adoption among institutional investors "looks likely to pick up in the coming years" — and noted that the crypto markets are becoming large enough to be taken seriously.

The fund said it planned to keep a close eye on whether institutions sought to gain outright exposure by adding crypto to their balance sheets — citing arbitrage opportunities and investment via venture capital or equities as two other options.

Dalio, 72, has gone on the record as saying he is a firm believer in blockchain technology — and has predicted it will be revolutionary. However, he fears governments that perceive Bitcoin as a threat may move to outlaw it — and despite maximalists predicting that BTC will one day become the world's reserve currency, he doubts central banks will ever own significant quantities of the cryptocurrency.

An Insight into Ray Dalio's Thinking

Back in January 2021, Dalio had described Bitcoin as "one hell of an invention," writing on Bridgewater's website:

"To have invented a new type of money via a system that is programmed into a computer and that has worked for around 10 years and is rapidly gaining popularity as both a type of money and a storehold of wealth is an amazing accomplishment."

The billionaire also said BTC had established a reputation as a compelling "alternative gold-like asset" — and said there was a "rising need" for assets that were limited in supply because of high levels of debt and quantitative easing in the global economy.

Dalio appeared clear-eyed about the threats that could face Bitcoin in the future, expressing fears that "better" cryptocurrencies may come along and displace it in the future:

"Since the way Bitcoin works is fixed, it won't be able to evolve and I presume that a better alternative will be invented and pass it by. I see that as a risk."

BTC was trading at $42,595.80 on Tuesday morning — its highest level in almost three weeks — after rising by about 3% over the past 24 hours. Most of these gains came during overnight trading in Asia.

Looking ahead, $45,000 is the level to watch, as this has served as an upper limit for Bitcoin's price since the start of this year.

Crypto News
Judge Asked to Tighten SBF's Bail Conditions After He Messages Potential Trial Witnesses on Signal
Sam Bankman-Fried reached out to the current general counsel of FTX US with a proposal to "vet things with each other" — raising alarm bells with prosecutors.
Por Connor Sephton
1 hour ago
3m
Crypto News
Law Firm Overseeing FTX Bankruptcy Could Make Hundreds of Millions of Dollars
Sullivan & Cromwell has more than 150 people working on the case — and 30 of them charge over $2,000 per hour. Associates are paid a minimum of $810 per hour.
Por Connor Sephton
1 hour ago
1m
Crypto News
Man Jailed After Stealing $2.5M of IOTA from Over 100 Investors
Wybo Wiersma, a Dutchman living in the United Kingdom, had established a website called iotaseed.io, which apparently allowed people to generate a secure seed phrase.
Por Connor Sephton
1 hour ago
1m
See all articles