The rise in DeFi means the rise in decentralized exchanges – Uniswap is the leading AMM on the Ethereum blockchain, while PancakeSwap is the most popular DEX for the Binance Smart Chain. 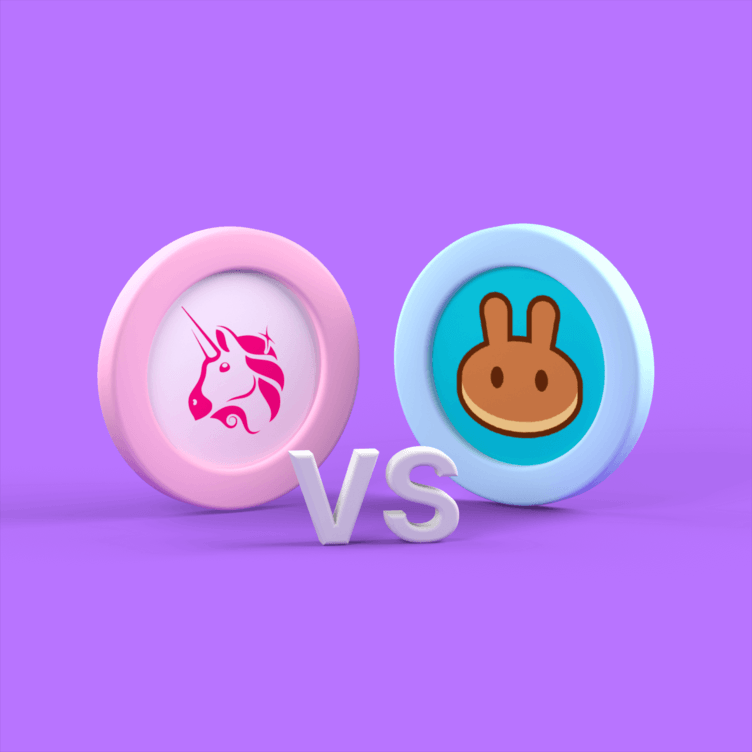 Ethereum’s unstoppable ride since its December 2020 launch of the Beacon Chain was slowed for some in February 2021 — the troubles, ironically, came from its price rise. The world’s second-biggest cryptocurrency, pushed by a new all-time-high (ATH) of over $2,000 and a surge in the popularity of staking apps, began to stutter due to congestion and outrageous gas fees, denominated in Gwei, hit the peak of 373.8 Gwei on Feb. 23, 2021. However, transaction fees on Ethereum DApps like Uniswap can reach upwards of a few hundred dollars during peak periods. This caused some users and developers to jump ship to other alternatives.
The Binance Smart Chain (BSC) and its highly popular decentralized exchange (DEX) PancakeSwap cashed in on this migration in a big way, thus kicking off new inter-chain rivalries between Ethereum and BSC — and their respective flagship exchanges Uniswap and PancakeSwap — that may decide the foreseeable future of DeFi.
Subscribe

PancakeSwap is a DEX powered by the Binance Smart Chain (BSC), which uses an automated market maker (AMM) model to fulfill orders. As such, PancakeSwap replaces an order book with a liquidity pool.
As of September 2021, PancakeSwap claims to be the most popular decentralized platform, with over 2.8 million users and $9.9 billion in total value locked (TVL). The latest version is PancakeSwap V2, and there are 1,426 token pairs to trade on the DEX.
Liquidity providers interact with PancakeSwap's Syrup Pools and receive LP tokens (called FLIP) that represent their share in the pool. These tokens are key to removing their share from the pool. Users can also farm for two additional tokens — CAKE and SYRUP. Since the platform runs on BSC, the tokens adhere to the platform's BEP-20 token standards.

True to its vibrant and almost playful nature, PancakeSwap also offer on-chain games. Users can participate in price prediction of BNB (currently in Beta) or enter into the lottery to win prizes in BNB.

Furthermore, the LP tokens come in different “flavors” influenced by the token deposited in the pool.

Uniswap is the most popular Ethereum-based DEX that uses an AMM model, employs liquidity pools instead of order books and has LP tokens for liquidity providers. Uniswap is the mother chain of PancakeSwap, which uses the original Ethereum blockchain to run its network as opposed to BSC. As one of the first wildly successful DeFi protocols, most DEXs have, in one way or another, borrowed features from Uniswap to run their own platforms.
Note that the AMM model removes the need to have a partner on the other side of a buy or sell order for a trade to go through. Consequently, less trading time is consumed on DEXs using this model. By removing the need to go through know-your-customer (KYC) procedures, these exchanges give access to decentralized token swapping to more people.
As of September 2021, Uniswap has over $6.3 billion in TVL. The protocol boasts over 1.5 million all-time users, and $386 billion in trade volume. The latest version of the protocol is Uniswap V3, which launched on the mainnet in May 2021.

Why The Rivalry Between PancakeSwap and Uniswap?

After an incredible 2020 DeFi summer, in which it rewrote the rules for decentralized exchanges, Uniswap has been viewed as a benchmark for DEXs, considering that most DeFi-focused projects are trying to take up the mantle in becoming the leading platform for token swaps.

PancakeSwap is the unofficial winner to this war, with its liquidity increasing by over 1,000% in approximately two months. Furthermore, PancakeSwap's volume had skyrocketed from a meager $37 million to a “whopping” $1 billion within the first 49 days of 2021.
Interestingly, its growth has been attributed to the shortcomings of the Ethereum blockchain that hosts Uniswap. The ETH-powered network suffers from scalability issues due to its reliance on the proof-of-work (PoW) consensus mechanism. As a result, the congestion on the platform causes a rise in transaction costs or gas.
In December 2020, Ethereum started the migration from a PoW to a PoS (proof-of-stake) consensus mechanism through the launch of Ethereum 2.0, which is expected to solve the scalability issue. Unfortunately, the complete rollout is expected to take approximately two years.

Binance Smart Chain continues to gain more foothold in the DeFi space. Some of the key areas BSC succeeds at include:

Instead of a PoW system, it uses a version of PoS called proof-of-staked-authority (PoSA). This version provides a three-second block time, which means that transactions settle faster and fees are substantially lower since there is no network congestion.

In February 2021, PancakeSwap had briefly usurped Uniswap as the largest AMM-based exchange. The daily trading volume on the BSC-powered project DEX was over $400 million more than the ETH-based platform on February 19.
Notably, the rise had been steady, recording over $1 billion in volume per day. Ethereum recorded $16 million in gas fees in a single day, while BSC users only had to pay a tiny fraction of that sum.
However, as of September 2021, Uniswap had regained its place above PancakeSwap — but a new player, Biswap, has already taken the number one spot above Uniswap, showing just how fast the decentralized trading world moves.
While Uniswap and PancakeSwap have 24H trading volumes over $1 billion, it still falls behind the top centralized exchanges (CEXs). For instance, the largest cryptocurrency exchange in the world, Binance, has 24H trading volume over $34 billion, at the time of this writing on Sept. 10, 2021.

CAKE is PancakeSwap's base asset, which doubles as a governance token, as well as provides farming and staking functionalities. Users can get their hands on CAKE by either providing liquidity, staking or buying them on an exchange (the staking option allows holders to earn more tokens).

Note that CAKE tokens issued to liquidity providers are tradable on the open crypto market, just like standard coins.

The exchange’s CAKE token had also recorded significant growth, gaining over 2,964% since the start of 2021.

On the other hand, we have UNI tokens, Uniswap’s native asset, which its developers had airdropped to initial users of its platform back in September 2020. However, the token's real use case on the platform, apart from governance, is yet to be defined.

As such, by the time UNI’s use case is more clarified, if it ever is, CAKE is expected to have gained more traction. For other governance purposes, PancakeSwap has another token called SYRUP, which allows holders to receive 40% of CAKE emissions — Syrup is not designed to be sold, since it is needed to unstake any staked CAKE

It's hard to quantify the two top DEXs on this one. While PancakeSwap's adoption rate is on the rise, Uniswap is older and has a considerable user base. It's among the few projects that fished DeFi from the shadows by introducing AMM functionalities that no other project had successfully executed before.

However, PancakeSwap seems to be on its way to pass Uniswap, owing to the rise in adoption of both the Binance Smart Chain and the CAKE token. As is common in the crypto space, the price of a digital asset responds to adoption or at least demand.

PancakeSwap has more active users than Uniswap, however the trading volume of Uniswap is higher, suggesting that Uniswap users are trading in larger denominations.

Ethereum clearly lost the battle on transaction costs at the moment, leaving the door wide open for more efficient platforms with smart contract capability. With Uniswap running on the second-largest blockchain, gas fees have been exponentially rising.

The problem is even bigger for Uniswap users who can only trade small amounts, as the gas costs would eat into their profits. By using a scalable network like BSC, PancakeSwap is able to offer dramatically lower transaction costs.

On BSC, transaction costs are in terms of pennies compared to Ethereum, whose fees can go up to a few hundred dollars. Apart from saving users from high gas fees, BSC also facilitates faster transactions.

PancakeSwap has the edge here, especially given the explosion of meme tokens on BSC. As of September 2021, PancakeSwap (V2) has 1427 tokens, compared to Uniswap (V3) which has 599.
However, in September 2020, the speed and sheer number of tokens listed on the network raised eyebrows as Uniswap reported an average of 150 token pairs added a day for a whole seven days — while an open system drives freedom, this freedom also extends to malicious actors. As a result of Uniswap’s permissionless system, fake projects had surged, eager to cash in on hasty investors. For example, Uniswap saw the listing of "Uniswap Exchange Token," which had no relation at all to Uniswap besides being listed on the platform.

PancakeSwap boasts the listing of successful and unique tokens like FRONT and BAKE — but the same “low-quality listing” issue that plagues Uniswap is also existent in the BSC-based fork.

Hence, the number of listed tokens may not necessarily mean the DEX is better, as it could be attributed to more meme tokens or even scam tokens being listed. In fact, quality over quantity is very true in this case, and the stringent vetting process of CEXs may be an advantage in this area.

On the other hand, PancakeSwap has already surpassed Uniswap's one-day trading volume. However, due to the DeFi ecosystem's volatility, the BSC-powered platform needs to maintain an upward trajectory to permanently beat Uniswap on trading volume.

Although PancakeSwap and Uniswap are both decentralized, PancakeSwap benefits from the Binance ecosystem's support. However, Uniswap also has a large community, thanks to its early entrance into the DeFi scene.

PancakeSwap is attempting to bridge the gap in users created by their relatively recent arrival on the DeFi scene by attracting a loyal following via lotteries, competitions and other similar incentives.

What's Next for These DEXs?

Again, it needs to be said that the PancakeSwap-Uniswap rivalry goes beyond the DEXs themselves, since it also illustrates the key differences between the Ethereum blockchain and Binance Smart Chain.

BSC currently seems to be on the gaining side, with its liquidity growing exponentially. Binance's native token, BNB, is reaping the rewards from the DeFi boom, occupying a seat on the top four leading cryptocurrencies in market cap on CMC.
Notably, the high volumes on BSC indicate the need for cheaper and faster transactions. Ethereum's high gas costs seem to be the highest contributor to users’ departures toward BSC-based DeFi networks. For instance, between January and February 2021, BSC recorded an increase in unique users from 12,700 to over 50,000.
Since users came with an increase in trading volume, on Sept. 10, 2021, BSC's trading volume reached a staggering $172 billion, while that of the second-largest blockchain stood at $20.5 billion. Furthermore, BSC is seeing a rise in popular decentralized applications (DApps) like MOBOX, CryptoBlades and Crypto Zoon, taking advantage of the rise in play-to-earn (P2E) games.

The increased competition will put immense pressure on Ethereum developers to speed up, or at least stick to, the deadlines that mark the roadmap leading to its proof-of-stake final form which should put an end to its current scaling issues.

DeFi
Ex-DeFi Developer Andre Cronje Breaks Silence and Says Crypto Regulation is 'Necessary'
Cronje claims a lot of crypto projects are being built by people who read Wikipedia articles on bonds and think to themselves "I can do this better."
Por Connor Sephton
4 months ago
3m
Tech Deep Dives
Cardano Roadmap and Outlook
Cardano is a cryptocurrency founded by Charles Hoskinson, a co-creator of Ethereum. Find out how it's quickly becoming a leading DApp development platform.
Por Anupam Varshney
1 year ago
8m
Tech Deep Dives
What Is Plasma Finance?
This time, CoinMarketCap takes a deep dive into another DeFi solution.
Por Andrey Sergeenkov
1 year ago
4m
See all articles