CoinMarketCap looks at the most exciting events in the NFT space — from LimeWire's deal with UMG for NFT licensing, to the first album royalties sharing using NFTs by The Chainsmokers. 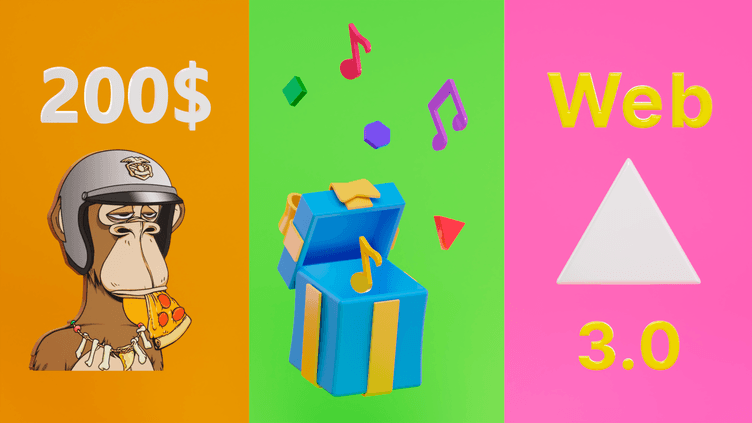 LimeWire has signed a deal with Universal Music Group that could see top artists use its NFT marketplace for their projects. Meanwhile, a music duo will use NFTs to reward 5,000 loyal fans, giving them a share of the royalties from their new album drop.

Here’s a rundown of some of the top non-fungible token (NFT) stories over the past week.
Subscribe

NFT Markets Seeing a Small Relief After a Rough 2 Weeks

First, a look at the overall NFT market from Nansen.

Nansen’s NFT-500 index which reflects the overall pricing trends of the NFT market shows that NFTs have had a slight relief after a steep correction since 4 May 2022. The relief was led by 2 main categories, Social NFTs and Metaverse NFTs.

Popular collections such as Moonbirds, Sandbox Land and Azuki are up 25-50% the past week.

ICYMI: NFT God Mode, one of Nansen’s NFT analytics dashboards, is now available for free with a Nansen Lite subscription. If you’re interested in checking out data for over 18,000 NFT collections, sign up now!

Dubai’s Museum of the Future To Launch NFT Collection

Dubai’s Museum of the Future has teamed up with Binance to launch its first NFT collection.

The museum, which opened a few weeks ago, is already making headlines. In particular, its Future Talks series sold out days in advance. The 77-meter-tall architectural marvel is home to a plethora of interactive exhibitions that give visitors the chance to experience the technologies and trends that promise to shape the world.

Dubbed ‘The Most Beautiful NFTs in the Metaverse,’ the NFTs will be released in the coming weeks as a metaverse counterpart to the Museum of the Future. The museum had previously bagged the title of “The Most Beautiful Building on Earth” in a 2021 list compiled by National Geographic magazine.

The Chainsmokers Tap on NFTs To Share Album Royalties With Fans

In what could be described as a first in the music industry, the popular electronic music duo The Chainsmokers will be giving 5000 fans a 1% cut of the royalties from its new album drop.

The music duo, who are best known for hits like “Closer” and “Paris,” is expanding its influence into the Web3 space. Its new “So Far So Good” album will include a drop of 5,000 digital collectibles that will allow fans to share 1% of the album’s master-side streaming royalties.

"We’re trying to go deeper than wider with our fan base with this new album," said the Chainsmokers' Drew Taggart.

Taggart and Alex Pall told reporters that they had identified their most loyal fans by analyzing data from concert sales, Discord activity and music streams. 5,000 of these fans will each receive an NFT for free.

“A number of artists have done this in the past, but not for free. It was important for us to do it this way because this isn’t about profiting off some new tech for us. It’s about connecting more deeply with you and harnessing a new disruptive technology in an effective way that truly shows what is possible as we head towards a Web3 world,” said the pop-leaning EDM duo in an official statement.

In addition to giving holders a share of the royalties, the NFTs feature additional perks, such as access to a members-only section on The Chainsmokers’ Discord channel, as well as opportunities to directly interact with the artists.

As per announcements, NFT holders will receive quarterly or semi-annual notifications about when they will receive payments. And if someone decides to sell the NFT, a smart contract will ensure that a 7.5% cut goes to The Chainsmokers, which the duo says will be given to the album’s songwriters.

While the new album dropped on Friday, the NFT bonanza began on May 17. To distribute the NFTs, The Chainsmokers tapped on Royal.io, a platform that lets artists sell fractional music ownership in the form of NFTs.

In December 2021, a Bored Ape holder mistakenly sold an NFT worth $300,000 for a mere $3,000 in what was widely described as a “fat finger error.” We’ve definitely not seen the last of such errors as another BAYC holder sold his Ape for 200 USDC over the weekend. However, the big question is whether the latest undervalued sale was indeed a mistake or a means to evade taxes.
On Sunday,  Boredapebot, a Twitter handle that posts about NFT sales from the Bored Ape Yacht Club (BAYC) collection, announced that someone had sold Bored Ape #6462 for 200 USDC or $200.
BAYC NFTs have grown to become one of the most expensive items in the market, with the price of the cheapest piece in the collection currently hovering around 101.75 ETH ($206,000) as of press time. Given the rare attributes of Ape #6462, such as its police motorcycle helmet, bone necklace, and pizza, one should expect it to sell way above the current floor price. Based on Nansen’s NFT price estimator, this particular Ape would be worth 185 ETH.

The previous owner received an offer of 200 USDC for the said piece. It is possible that the recent sale was just another costly mistake since the owner may have thought he was accepting an offer of 200 ETH instead of the 200 USDC. To put things in perspective, the Ape was sold for 99.9% below the current floor price of the collection.

While some members of the NFT community have sympathized with the seller, there are those who strongly believe that the sale was a tax evasion tactic. Notably, the NFT’s transaction history on OpenSea reveals that the piece was sold several times at above 2 ETH ($7,000) about a year ago. Also, Bored Ape #6462 has moved across different wallets at least five times since it was minted. Furthermore, the account of the buyer was created this month, with the 200 USDC offer being accepted within a few minutes after it was sent out. One user tweeted:
While one user suggested that the seller was only engaging in “wash trading,” another opined that the previous owner could be a wealthy NFT holder who “sold their nephew one of their board apes for 200 USD.”

Leading institutional digital asset custody platform, Fireblocks, is launching out into the web3 space. The company has launched a new platform offering a suite of tools for developers to build NFT, DeFi and GameFi products and services.

The new product, called Web3 Engine, will offer custody services, risk mitigation tools, treasury management and a tokenization mechanism for managing and minting NFTs. It will also provide access to platforms like OpenSea, Rarible, Uniswap and dYdX directly from the Fireblocks console.

"Web3 is the future and we've already entered a new era of the Internet," said Michael Shaulov, CEO of Fireblocks.

"In order for this ecosystem to continue to grow, the community is tasked with solving a very critical problem: security. As we already provide a secure platform and a suite of development tools for businesses to build digital assets and crypto businesses, unlocking access to Web3 was an important next step. Now, with a fully tailored experience for connecting to Web3, we aim to accelerate the launch of a new wave of super apps."

Fireblocks has already onboarded a number of high-profile clients for the service. The likes of Animoca Brands, MoonPay, Stardust, Wirex and Celsius are already using Web3 Engine.

“The goal is to essentially bring all the security arsenal and capabilities that we've built for empowering financial firms to operate with crypto to this new group of players,” Shaulov added.

NFTs are coming to the popular audio streaming platform Spotify. On Friday, Music Ally reported that the company had begun testing a new feature that would allow artists to display their NFTs on their profiles.

A spokesperson for the company told reporters that “Spotify is running a test in which it will help a small group of artists promote their existing third-party NFT offerings via their artist profiles.”

The test is available to a select group of Android users across the United States. Participants will be able to preview some NFTs via an artist’s profile page. They can also learn more about a particular NFT and opt to be redirected to an OpenSea page where they can purchase the item. Keep in mind that the streaming service does not support NFTs that are in video or GIF formats. For now, only a static image is displayed without any sounds.

As per the announcement, Spotify will not be charging any fees for NFT sales during the testing. The company’s spokesperson also noted that tests are aimed at improving “artist and fan experiences,” adding that “some of [these] tests end up paving the way for a broader experience and others serve only as an important learning.”

Meanwhile, it remains unclear if the NFT test will include other artists or if it is just limited to DJ and producer Steve Aoki and indie rock band The Wombats for now.

Getty Images, a powerhouse for stock images, videos and music, has inked a multi-year partnership with Candy Digital. The deal will usher Getty Images into the world of photography NFTs along with a launch of its own NFT collection. On the flip side, Candy Digital will become the official and exclusive marketplace featuring Getty Images NFTs.

The Getty Images NFTs will curate photos from over 465 million images, including 135 million analog pieces, some of which have never been seen by the general public. The initial collection will be available in the coming months and will be minted on the Palm blockchain, an Ethereum-compatible sidechain that is touted as more environmentally friendly than the Ethereum mainnet.

As already mentioned, primary and secondary sales for the NFTs will happen on Candy, which already has NFT partnerships with NASCAR, Major League Baseball and WWE. It is worth adding that Candy also supports card and crypto payments.

Commenting on the collaboration, Getty Images CEO Craig Peters said that he views digital collectibles as a way to tap into a new customer base.

"This partnership speaks to our mission to connect people with our high quality, exclusive visual content […] The fast-growing audience of NFT collectors represents significant opportunities for the company and our global photographer community.”

On his part, the CEO of Candy Digital Scott Lawin expressed his delight at the deal, stating that the partnership will "creatively bring these iconic and rare photographs from the last two centuries to life for people to experience and collect in a new digital format."

Although not as popular as avatar NFTs like Bored Apes and Okay Bears, photography NFTs are beginning to carve a niche for themselves. Photographers like Elise Swopes, Cath Simard and Randall Slavin have sold photos for thousands of dollars as digital collectibles.

Months after making a comeback as an NFT marketplace, former peer-to-peer music sharing service LimeWire has struck a deal with Universal Music Group (UMG). The major deal will allow UMG artists and other imprint record labels to leverage LimeWire’s marketplace for digital collectibles.

It is worth clarifying that the partnership does not necessarily mean that any of UMG’s artists will launch their NFTs via LimeWire. However, that possibility is now open since UMG will provide licenses that will allow LimeWire to work with its artists on music-based NFT projects.

“We’re thrilled to open up the LimeWire NFT ecosystem to Universal Music Group artists and fans and can’t wait to see the first creative projects being launched on the marketplace,” said Paul and Julian Zehetmayr, LimeWire Co-CEOs.

LimeWire has recently raised $10M in a private token sale, with investors ranging from Kraken Ventues to Crypto.com.