What Is Optimism? The Ultimate Guide to the Optimism Ecosystem

By Ivan Cryptoslav
9m
3 months ago

CoinMarketCap Alexandria looks at one of the top layer-2 blockchain — Optimism and its DApp ecosystem, including its roadmap and highly anticipated OP token airdrop. 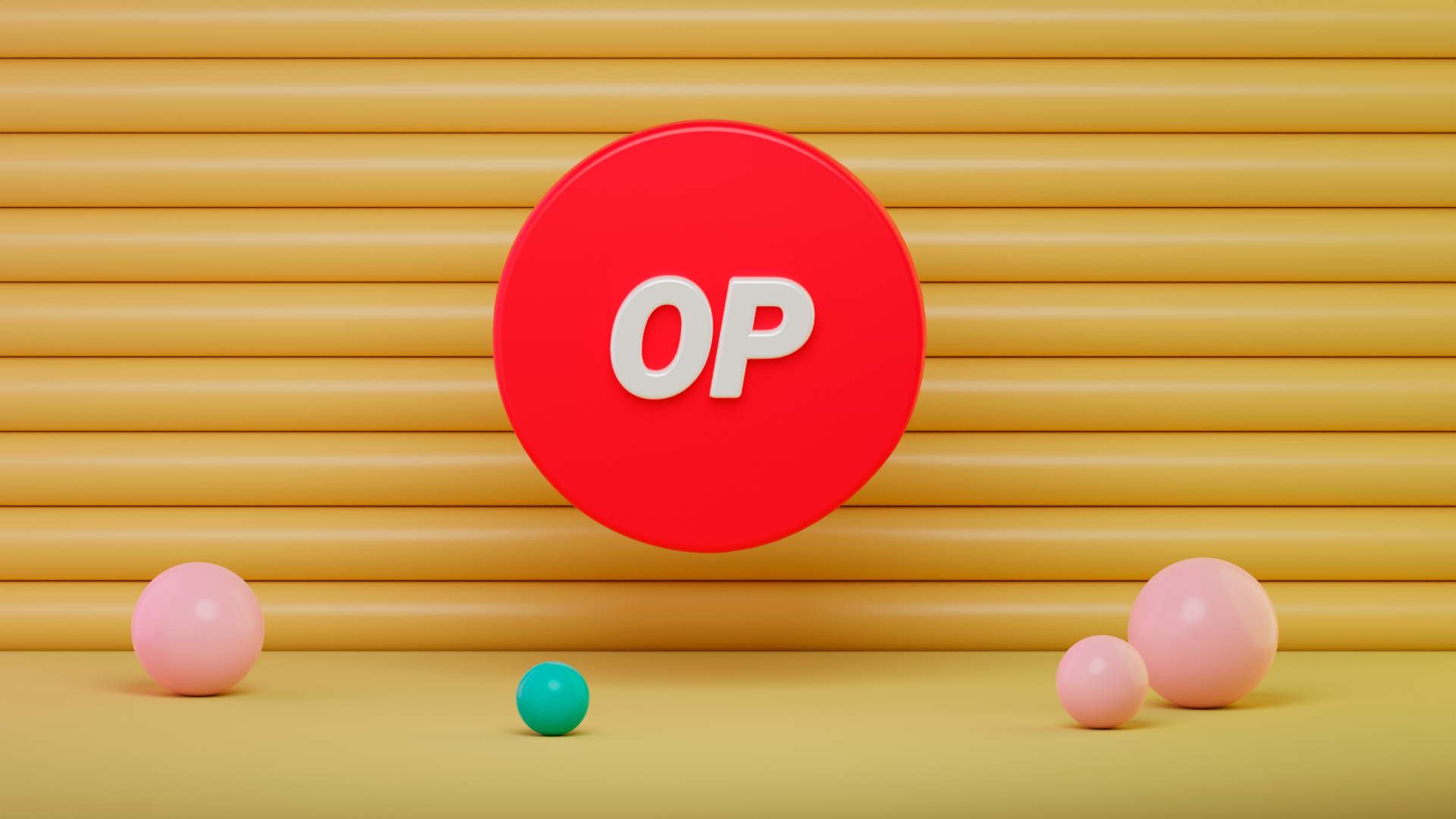 Both ecosystems are working on a long-term solution to solve Ethereum’s congestion and gas fees problems. The Ultimate Guide to the Optimism Ecosystem looks at:

Optimism is a layer-two blockchain for Ethereum using optimistic rollups as scaling technology. It is one of Ethereum’s biggest scaling solutions with over $250 million in TVL at the time of writing. Optimistic rollups outsource the execution of transactions to a L2 solution like Optimism.
The transactions on Optimism are rolled up into batches that get relayed to the Ethereum mainnet, which only records the new chain state. Since their validity is assumed, the rollups are called optimistic. A rollup's validity can be challenged for up to seven days, which is why withdrawals from Optimism to Ethereum take seven days.
The upside to Optimism’s solution is significantly lower gas costs on the L2 and a decrease in gas fees on Ethereum in the long run. Since the Ethereum mainnet will have to record less transaction data, one of Optimism’s externalities is a less clogged Ethereum. Moreover, Optimism operates with the same EVM-compatible smart contracts as Ethereum and is secured by the Ethereum mainnet, providing an ideal solution for new DApps to build on.

Optimism vs Arbitrum vs ZK-Rollups

We covered the differences between Optimism and Arbitrum in the Ultimate Guide to the Arbitrum Ecosystem. However, here is a quick recap of the main similarities and differences.

Where Optimism and Arbitrum Are Similar

Where Optimism and Arbitrum Are Different

Where Optimism and ZK-rollups Are Different

Optimism launched its first testnet in 2019 and the first EVM-compatible testnet in 2020. The Optimism mainnet and the EVM-compatible mainnet were launched in 2021. In June 2022, Optimism dropped its OP token via a highly anticipated airdrop. The token allocation is laid out in the Optimism’s community portal. An interesting thing to note is the inclusion of public goods funding, which aims to reward public members that contribute to the Optimism protocol, and is a major part of the Optimism Collective.

Optimism currently has more than 50 decentralized applications running on its chain. As part of the roadmap, Optimism plans to:

Optimism has raised a total of $28.5 million across two investment rounds. The first round was a seed round, raising $3.5 million led by Paradigm and IDEO CoLab Ventures. The Series A funding round in February 2021 led by a16z raised $25 million.

How To Use Optimism on Ethereum

You can use the Optimism blockchain from Ethereum with the following steps:

The OP Token and Airdrop

On May 31, 2022, Optimism airdropped its OP token, making it one of the biggest airdrops in history. However, the token price crashed quickly, as users had trouble claiming their promised airdrop. Even though Optimism resolved the issue, OP continues to trade around $0.50, well below its listing price, amidst a broader crypto market meltdown. To learn more about the tokenomics of OP, head to the OP token page.

The Best DEX on Optimism

The best decentralized exchanges (DEX) on Optimism are:

Uniswap (UNI) is the biggest DEX by TVL on Optimism ($30 million at the time of writing). Uniswap is mainly known for being one of the first DEXes to offer trading with an automated market maker (AMM) model. Uniswap is also available on Arbitrum, Polygon, and, of course, Ethereum.

Curve (CRV) is a stablecoin DEX and one of the most important exchanges for swapping stablecoins. It is one of the biggest decentralized exchanges on Optimism with a TVL of over $23.5 million at the time of writing. Curve became popular through its AMM model and has integrations with all relevant blockchains.

ZipSwap (ZIP) is a more gas-efficient native swap that guarantees the lowest possible fees on token swaps for optimistic rollups. Thanks to technical improvements to the Uniswap V3 AMM, Zipswap can provide better liquidity at lower slippage.

Perpetual Protocol (PERP) is a decentralized exchange for trading perpetuals and futures. Instead of trading on centralized exchanges with an order book model, traders can trade in a non-custodial manner and against an automated market maker. All trades are recorded on-chain, although their execution happens on a gasless sidechain.

The three main bridges to Optimism are:

Synapse (SYN) is a cross-chain bridge that connects Optimism to other layer-one blockchains like Ethereum. Synapse is secured by cross-chain multi-party computation validators and powered by the Synapse token SYN, which is used as an incentive for liquidity providers and a gas fee subsidy.

Synapse also expands across other layer-one and layer-two chains and offers token swaps and liquidity pools as well. The total value locked in the Optimism ecosystem is close to $5 million.

Hop Exchange (HOP) connects layer-two networks like Optimism and Arbitrum with Ethereum. Like on Synapse, users can transfer tokens almost instantly by using the Hop Exchange, without having to wait multiple days. This is made possible by Hop’s interconnectivity with other networks, which allows moving assets around to provide the desired asset on layer one.

Hop Exchange also uses automated market makers to swap between each token and the corresponding canonical token on each rollup to rebalance the liquidity across the network. Hop exchange has over $5.7 million in TVL on Optimism, and recently conducted an airdrop of its HOP token.

The Best Lending Protocols on Optimism

The best lending protocols on Optimism are:

Aave (AAVE) is a DeFi money market protocol and lending platform that allows users to borrow and lend different crypto assets. Users can deposit their crypto assets in different liquidity pools and earn interest on them or borrow against their existing crypto holdings as collateral.

Aave is massively popular across different blockchain ecosystems and boasts over $8 million in total value locked on Optimism.

Stargate Finance (STG) is a fully composable liquidity protocol, allowing users to transfer assets across blockchains and access the protocol’s unified liquidity pools with instant guaranteed finality.
Stargate’s key products are cross-chain transfers, liquidity provision to its Omnichain protocol, yield farming for STG rewards, and staking to receive veSTG, the protocol’s governance token. Although Stargate Finance is not as popular on Optimism as it is on Arbitrum, it still has over $7 million in TVL to show for itself.

dForce (DF) strives to provide DeFi infrastructure in web3 through lending, trading and staking services. As a community-driven DAO with dForce USD (USX) as a stablecoin at the heart of its protocol matrix, dForce implements a pool-based and vault-based model with a hybrid interest rate policy to scale its algorithmic stablecoin. Furthermore, dForce has protocol-to-protocol integrations and a cross-chain bridge to facilitate its adoption.

Velodrome Finance (VELO) is a liquidity incentive protocol for Optimism. Velodrome expands on the basis built by Solidly Exchange, a decentralized exchange for protocols. It aims to provide protocols with their own liquidity and ensure better interoperability between DeFi protocols in the Optimism ecosystem.

QiDao (QI) is a zero-interest crypto lending protocol with stablecoin loans at zero percent interest. Users can create a vault, where they deposit their collateral and borrow stablecoins against it.

As a self-sustaining, community-governed, and decentralized stablecoin protocol, loans are secured by having more total value locked than debt issued.

The Best DApps on Optimism

Some of the best DApps on Optimism include:

Synthetix (SYN) is a derivatives liquidity protocol that enables the creation of synthetic assets on the blockchain. Synthetic offers exposure to real-world assets like stocks with on-chain tools. Its core products include decentralized perpetual futures and synthetic versions of tech stocks and commodities like gold. The price of the underlying assets is tracked through oracles.

SNX tokens serve as the collateral for the minted synthetic assets and are burned when a position is liquidated. Synthetix is the biggest protocol on Optimism with a TVL of over $100 million.

Lyra (LYRA) is a decentralized options protocol with a skew-adjusted pricing model. Thanks to its dynamic volatility input to price options, Lyra can provide deeper liquidity than competitor protocols, yielding more trading volume for traders and higher fees for the protocol. Lyra is the most popular options protocol on Optimism with a total value locked of over $18 million.

Aelin (AELIN) is a decentralized fundraising protocol that allows to raise capital and do OTC deals without the involvement of venture capitalists. Sponsors can create pools that investors can deposit funds into for potential deals.

Each deal has an optional vesting schedule and once a sponsor and a suitable investor have agreed on the terms, the protocol acts as a permissionless intermediary providing the infrastructure for the fundraising to happen.

Ethereum
Has The Merge Turned Ether into a Security? Yes, SEC's Gary Gensler Suggests
According to The Wall Street Journal, Gary Gensler believes cryptocurrencies that operate on PoS chains may be classified as securities.
By Connor Sephton
2 weeks ago
2m
Tech Deep Dives
What Is Algorand? Features, Tokenomics and Price Prediction
CoinMarketCap takes a deep dive into Algorand, a scalable layer-one blockchain based on proof-of-stake.
By Ivan Cryptoslav
4 months ago
5m
Tech Deep Dives
What Is DogemonGo (DOGO) And How To Play It?
CoinMarketCap takes a deep dive into DogemonGo (DOGO), a game inspired by Pokémon Go, where players can earn Dogecoin (DOGE) by capturing Dogemons.
By Hassan Shafiq
1 year ago
4m
See all articles