This week, CoinMarketCap explains key differences between monolithic and modular blockchains and their architectures. 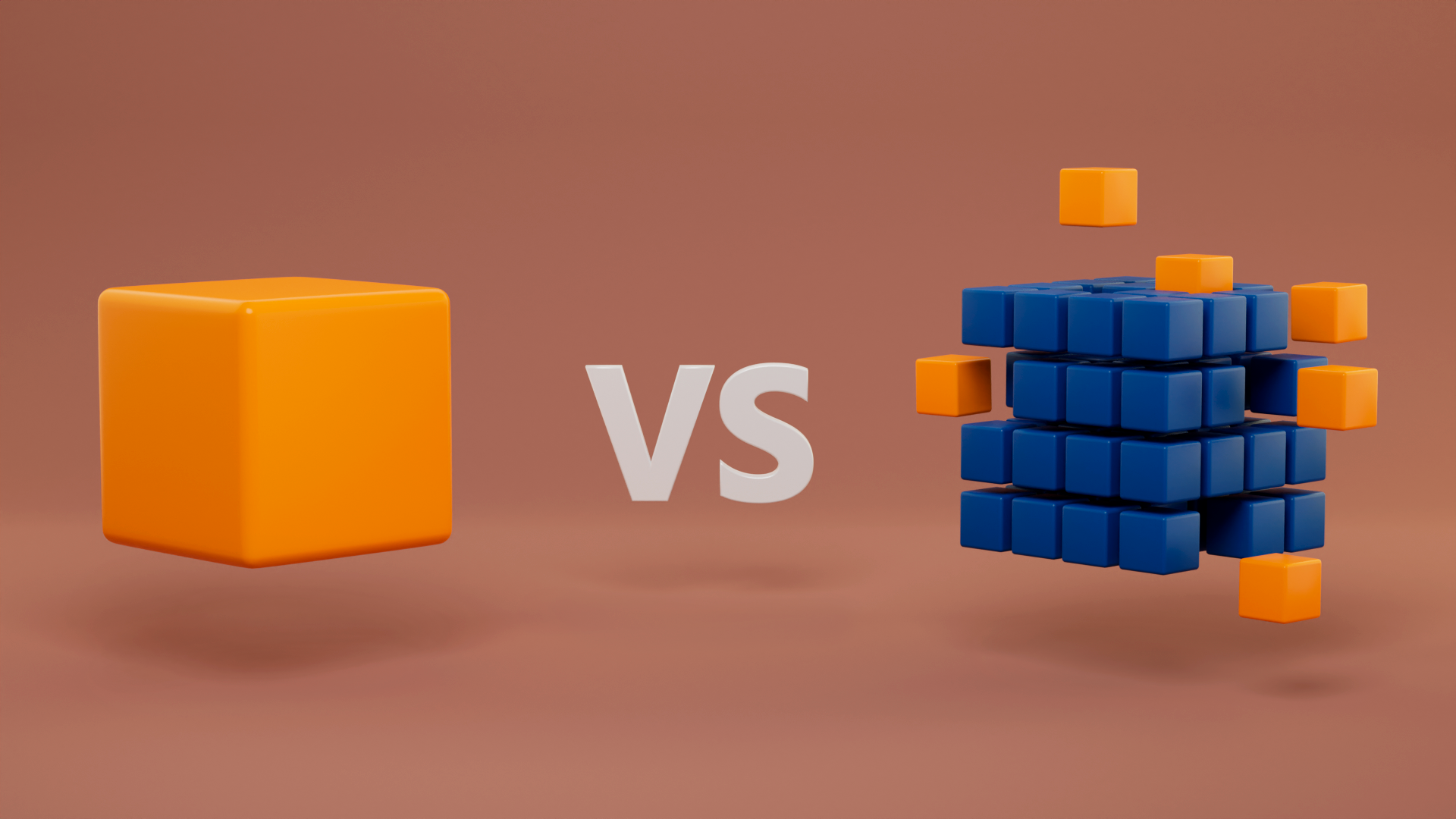 We don’t often pay a lot of attention to blockchain designs in crypto — primarily because most of us are not directly involved in its processing and development. But learning the technicalities of any industry that you are interested in always pays off. Let’s discuss the basics of modular and monolithic blockchains and their functionalities!

Monolithic blockchains have been around for over a decade now. These blockchains are primarily characterized by their ability to handle three core features: consensus (depending on whether they are PoW or PoS), availability of data (the amount of blockspace) and execution of transactions.
Modular blockchains, on the other hand, are known to outsource one of these responsibilities to an external chain. A perfect example of this is sharding on Ethereum PoS.

Both these types of blockchains have different architectures and handle decentralization and security separately, while also being scalable.

Understanding the Core Concepts of Blockchain

Modular blockchains attempt to bring the best of both worlds by being both scalable and decentralized.

To better understand how these two blockchain designs work and how they differ, let’s first attempt to understand what the core concepts of a blockchain are — especially in this context.

What Is a Monolithic Blockchain?

If a blockchain aims to have a high throughput, it will increase its blockspace and attempt to have more transactions in the same block. This will stress the node service providers as they will have to increase their storage, and could result in them dropping out due to not having adequate resources (whether technical or financial). This scenario will reduce security and decentralization.

All permissionless (read: decentralized) blockchains aim to fulfill this primary objective by keeping the node entry requirements low. In the early days of Bitcoin, you could use your own computer to mine Bitcoin. But over the years, the difficulty has increased tremendously. For Bitcoin especially, miners need to perform computational tasks using hardware and energy to mine new blocks. For PoS blockchains, however, the locked capital (known as stake) is used to secure the network. Some have already called out the difficulty of becoming a miner on Bitcoin because of the hardware required and energy usage.

How Does a Monolithic Blockchain Work?

A monolithic blockchain functions according to the consensus protocol set down for the blockchain. To participate, you need to run a node aligning with the requirements set by the network. Let’s take the example of Ethereum. Any user wanting to run their own node first needs to identify which kind of node they want to run. After setting it up, they download the blockchain data from the network. After this process, they start participating in the network following the protocol rules. In the case of PoW, validators are required to put up their hardware (computational hardware) at stake to be selected to mine blocks on the network. In the case of PoS, their stake is utilized.

In both cases, it is the monetary premium that the network issues for miners/validators that makes them participate in the protocol.

Benefits of a Monolithic Blockchain Design

One of the biggest benefits of a monolithic blockchain is that if it focuses on keeping itself decentralized and secure, it becomes a trustless blockchain. This decentralization lowers the barrier to entry for all users who wish to utilize the blockchain to execute transactions. That is one of the biggest reasons why Bitcoin and Ethereum currently occupy the top spot when it comes to the market cap in crypto. They best follow the narrative of a truly permissionless and decentralized ecosystem that crypto has aimed to be.

Problems With a Monolithic Blockchain

The node is required to perform all three actions all at once. If, however, the blockchain were to compromise any of the above-mentioned aspects, then the blockchain trilemma comes in. It consists of scalability, decentralization and security. The reason it is a trilemma is that a blockchain - in the traditional sense - can only achieve two out of these three components.

We have already explored this above so I will only touch upon it briefly here.

As David and Ryan famously put it in their podcast, all monolithic blockchains are stuck somewhere in this triangle. Both Bitcoin and Ethereum have attempted to remain decentralized (at the cost of not being able to scale) and secure. Another critical problem with monolithic blockchains is that they are not economically sustainable. Just think about Ethereum in its current form (PoW). In a highly congested network, it becomes too difficult for users to execute transactions on Ethereum because of the soaring fee. This is a result of the limited blockspace available on Ethereum.

One way around this would be to increase the blockspace. But that, in turn, will stress the existing validators on the network, thereby compromising decentralization. Since that does not happen, users end up paying exorbitant gas fees for simple transactions. This has a benefit and a repercussion.

Repercussion: It impacts the economic viability of the blockchain, thereby pushing users to look for alternatives.

The only way to optimize a blockchain for security, decentralization and scalability then becomes too difficult. And that is why, they resort to external help, such as shards and/or rollups. This is where modular blockchains come in and change the whole game around blockchain design.

What Is a Modular Blockchain?

One of the key things to note in modular blockchains is that they split the three aforementioned tasks rather than performing all of them at once on L1. The idea is to make the system more efficient by making the blockspace bigger, narrowing down the validator set to focus on shards, and thus exponentially enhance the throughput of the blockchain. In a nutshell, it can be said that all the limitations of a monolithic blockchain are effectively transformed into modular factors, thereby increasing its efficiency by high orders of magnitude. How does that happen? Let’s have a look!

Let’s first talk about execution, because this is how the blockchain aims to increase throughput.

As you can tell, rollups effectively help in reducing the burden on L1 without compromising on decentralization. As mathematician David Hoffman put it, you can think of them as “compressing” agents for the blockchain — akin to the compression of files on the computer. This greatly increases the efficiency of the blockchain.

The next key component is data availability. This is where it gets really interesting!

Sharding is the core principle here that helps scale the blockchain exponentially without compromising decentralization or security. When we “shard” Ethereum’s data layer, the validators on the network get spread across different smaller networks. These smaller networks then verify various transactions on the blockchain. This effectively helps increase the blockspace on that chain, thereby increasing the network’s overall throughput.

When you split these validators into smaller groups/networks, they are known as committees. Vitalik in his blog on sharding put it simply: the validators are “randomly split” to execute various incoming transactions.

For example, if there are 100K validators on the network and there are 100 committees of 1K validators each, there would only be the need to verify 100K signatures rather than verify all the blocks signed by those validators.

When you combine sharding with rollups, the scalability impact is compounded. Imagine batches of transactions being processed by rollups and verified by these communities. Not only are you increasing the blockspace massively, but you are also verifying more transactions per second. This compounds the overall throughput of the blockchain — all without compromising on neither security nor decentralization.

Proof-of-stake (PoS) chains help in the modularity of the blockchain because of a very simple yet foundational principle.

In proof-of-work (PoW), the security of the network depends on the computational hardware that miners put up. The more complex the hardware is, the more likely it is to solve cryptographic computatons, thereby helping the blockchain remain alive.

In proof-of-stake, however, security is a factor of the economic capital that users decide to lock (or bond) to the network.

Now, in the former case, you need expensive hardware (which over time gets outdated and needs to be upgraded). In the latter case, however, you just need to spin up a node (which can be very easy to set up) and deposit the minimum required capital to participate in the staking process. Thus, PoS makes it significantly easier for a wider set of validators to participate in network consensus.

Benefits of a Modulator Blockchain Design

One of the biggest benefits of a modular blockchain is its ability to split various tasks into segments. This fragmentation of tasks/responsibilities helps the blockchain scale without compromising security. As blockspace increases with data shards and as rollups introduce scalability, the overall throughput of the blockchain increases.

All of this is made possible with PoS chains where the barrier to entry to the chain is lowered as compared to PoW chains.

As already discussed above, Ethereum PoS is probably one of the biggest examples of a modular blockchain. Another example is Celestia, a relatively new blockchain.

How Will Ethereum Work in a Modular Context?

Ethereum is probably one of the perfect examples of a modular blockchain currently in existence. While it currently follows the PoW consensus mechanism, when it does transition to PoS in late 2022, it aims to become one of the most scalable, decentralized and highly secure blockchains.

A more predictable future for Ethereum PoS will be that as more and more validators will join the network, a larger set will be able to be spread across different shards. And as more shards are introduced, more data can be stored (i.e., the blockspace increases) — and as more shards are introduced, rollups can consume more data. Thus, the effect of throughput on Ethereum will be compounded by the availability of both shards and the introduction of rollups.

Crypto Basics
Here's Why Everything You Knew About Bitcoin and Inflation Is a Lie
What if we told you they have been lying to you about Bitcoin all along?
By Ivan Cryptoslav
1 month ago
10m
Crypto Basics
Nine Things We Know About Coinbase's Stock Market Debut
From a controversial valuation to the risk factors affecting the business, this is everything we know about Coinbase's listing on the Nasdaq.
By Leo Jakobson
1 year ago
9m
Crypto Basics
Jerome Powell Renomination and What It Means for Crypto
What exactly would the Fed regulate when it comes to crypto? Could it approve its use as an asset class for various investors? Read more to find out!
By Avyan
9 months ago
13m
See all articles