IMF Boss Says Crypto World 'Important' Despite Terra's Collapse… But Has Choice Words on Bitcoin
Daftar Isi
'Just Because You Can, Doesn't Mean You Should'
Crypto News

At the World Economic Forum in Davos, Kristalina Georgieva says all digital assets shouldn't be treated the same — as crypto "offers us all faster service, lower cost, and more inclusion." 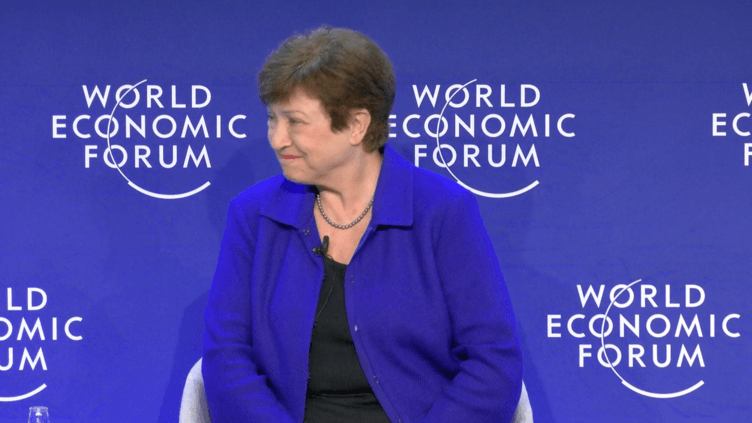 The International Monetary Fund's managing director has said the world shouldn't be deterred from embracing cryptocurrencies — even after the dramatic collapse of the Terra ecosystem.

In a potentially surprising statement at the World Economic Forum in Davos, Kristalina Georgieva was full of praise for digital assets, and said:

"It offers us all faster service, much lower cost, and more inclusion. But only if we separate apples from oranges and bananas."

This is where things get a little bit murkier — as the IMF executive didn't specify which digital assets she regards as better than others. Instead, her overarching point was that all cryptocurrencies shouldn't be treated the same way — and regulation that protects consumers and helps them make informed decisions is crucial:

"There are very important responsibilities for the central banks and for other regulators to make sure that everybody can step into this world with some confidence."

Despite her upbeat assessment, Georgieva made it clear that she is cautious about Bitcoin being treated as an everyday currency. During a panel on central bank digital currencies, she said:

"When I say that Bitcoin may be called 'coin' but it's not money. Why? Because a prerequisite for something to be money is to be a stable store of value. So you can actually plan around it."

And speaking more specifically about the collapse of the UST stablecoin, the Bulgarian economist said she feels for those who lost money as a result — and said a lack of education on "this new investment world" is a big problem.

Returning to the theme that not all stablecoins should be tarred with the same brush, she said it's crucial for such assets to be properly backed by assets that are held in reserve — meaning they can be redeemed for fiat without causing the entire ecosystem to collapse. She warned:

"The less there is backing [a stablecoin], the more you should be prepared to take the risk of this thing blowing up in your face."

'Just Because You Can, Doesn't Mean You Should'

Georgieva also jokingly alluded to the "hate tweets" she has received after the IMF expressed opposition to countries that have adopted Bitcoin as legal tender.

Referring to El Salvador's move to embrace BTC last September, she described President Nayib Bukele's Bitcoin Law as a "sovereign decision" — but said that this doesn't necessarily make it a good decision.

CNNs Julia Chatterley, who was moderating the panel on CBDCs, said Georgieva had previously characterized it like this: just because you can, doesn't mean you should.

Dozens of countries around the world are seriously exploring central bank digital currencies in the hope that they could modernize payments infrastructure.

But some Bitcoiners in particular have been exceedingly cautious about the introduction of digital dollars and digital pounds — claiming that they could erode privacy and be used as a form of surveillance against everyday consumers.

Crypto News
Podcast: Bitcoin's Best January Since 2013... But What's Next?
Also today, a crypto entrepreneur who duped investors by claiming he had invented a digital asset backed by gold has been jailed for eight years.
Oleh Connor Sephton
11 hours ago
1m
Crypto News
Celsius Network Criticized in Damning New Report
The court-appointed examiner issued a blistering report, saying the bankrupt crypto lender was "Ponzi like" and manipulated its CEL token to enrich founders.
Oleh Leo Jakobson
12 hours ago
4m
Crypto News
My Big Coin Scammer Gets 100 Months In Prison
In a historic case, Randall Crater was convicted of wire fraud in a $7.5 million scheme to peddle a fake payments token he said was gold-backed and working with Mastercard.
Oleh Leo Jakobson
12 hours ago
2m
See all articles