Also today, the International Monetary Fund concedes that cryptocurrencies aren't being used to evade sanctions on a massive scale in Russia. 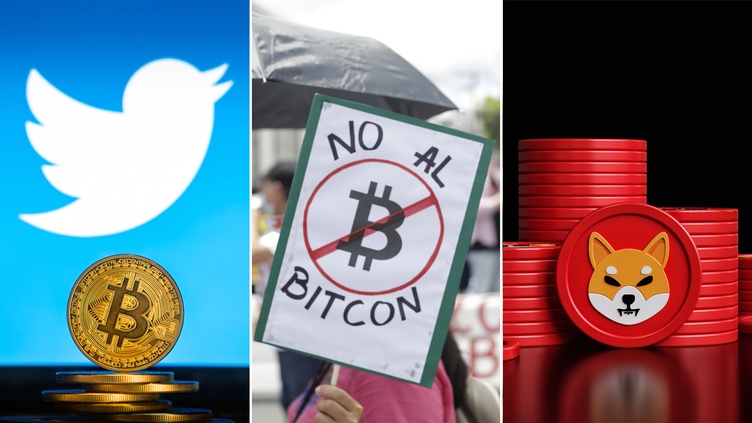 Things aren't looking good for Nayib Bukele's "volcano bonds." El Salvador's president has vowed to raise $1 billion — investing half of it into Bitcoin, and half into infrastructure to mint new coins. The bonds have been delayed as the country waits for "favorable market conditions." But according to a former finance minister, this is a sign that there's a lack of interest among investors… and the ambitious project may be "dead." Another economist also warned "there is no chance" of them ever launching — with MicroStrategy's Michael Saylor recently warning that traditional financial markets "aren't quite ready" for Bitcoin bonds.

Crypto billionaire Sam Bankman-Fried has said he would be "excited" to help Elon Musk transform Twitter. The FTX CEO firmly believes blockchain technology could help preserve free speech. Speaking to Bloomberg, SBF said he's prepared to design and build a blockchain-powered network "as a test case" — and help manage it. The entrepreneur believes the fragmentation of social networks is a big problem, complaining: "There's no ability to see a tweet on Facebook. If you message someone on Facebook, even WhatsApp can't read it — and that's the same company." He also warned that the status quo means "three guys who run three companies" are responsible for deciding what can and can't be said. Bankman-Fried thinks a single blockchain should be used by all social networks, meaning they can all access what's posted. Users — and shareholders — are now nervously waiting to see what happens next in the fast-moving drama between Musk and Twitter.

Shiba inu's metaverse has been plunged into controversy after a user attempted to draw a swastika in its virtual world by buying plots of land on the map. The offensive imagery was spotted by members of the project's Discord channel — and users quickly made counter purchases to turn the hateful symbol into a window instead. One wrote: "I just can't believe there's people out there using the bidding map to make swastikas — what a loser." SHIB: The Metaverse has warned hate speech won't be tolerated on its platform — and wallets that break the rules will be blacklisted and stopped from participating. But unbelievably, some users then criticized the project, and claimed this policy was a step towards decentralization.

A court in London has formally issued an order to extradite Julian Assange to the U.S. to face extradition charges. The WikiLeaks founder is wanted in America for allegedly publishing classified documents — including hundreds of files related to wars in Iraq and Afghanistan. Earlier this year, crypto worth tens of millions of dollars was raised to help Assange fund his defense. The decision on whether to send the 50-year-old to the U.S. will now be made by British Home Secretary Priti Patel. However, there is a chance that Assange's legal team will launch an appeal.

Russia could mine BTC to avoid sanctions 🚨

The International Monetary Fund has expressed fears that Russia could start mining Bitcoin in order to avoid economic sanctions. However, the financial institution conceded that it is currently "impractical" to move rubles into crypto on a large scale because of low liquidity. In a new report, the IMF warned digital assets could still be used to dodge restrictions — especially if exchanges fail to perform due diligence checks, or anonymizing tools are used. Authors also warned that emerging markets are increasingly using crypto — and policymakers there face "significant challenges" if they start being used as a payment method. Meanwhile, they said the DeFi sector brings "market, liquidity and cyber risks against a backdrop of legal uncertainties." The IMF's criticisms are often rejected by crypto enthusiasts, who claim the organization simply wants to maintain the dominance of fiat currencies.
17 people liked this article

Bitcoin
Amber Group Ditches Chelsea Sponsorship as Fears Grow over Company's Future
There have been widespread concerns that the company could be affected by the bankruptcy of FTX — but Amber executives say daily operations are continuing as normal.
Oleh Connor Sephton
25 minutes ago
2m
Bitcoin
After Long Wait, Withdrawals of Staked Ether Could Begin from March
Ethereum developers have described the Shanghai upgrade as a top priority — and some of those who have locked up ETH have been unable to access it for two years.
Oleh Connor Sephton
49 minutes ago
2m
Bitcoin
Coinbase Attacks Tether and Urges Users to Switch from USDT to USDC
"The events of the past few weeks have put some stablecoins to the test and we’ve seen a flight to safety," a new blog post warns.
Oleh Connor Sephton
1 hour ago
3m
See all articles