CMC and Footprint Analytics delves into the performance of the nascent GameFi industry from January to July 2022 — and examine which chains, tokens and games to watch in H2 2022. 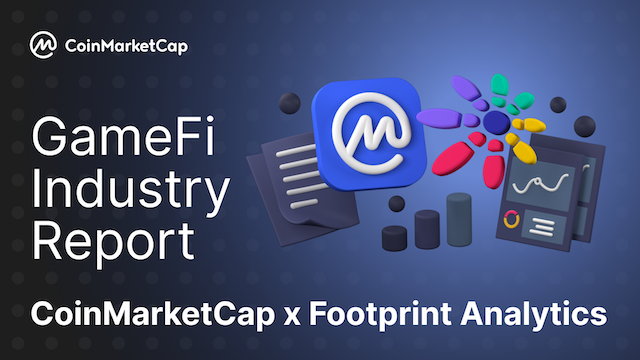 While crypto has been through several ups and downs over the past decade, GameFi as a new segment has only emerged since late-2020, and the first half of 2022 was the maiden bear cycle for the blockchain gaming industry.

This report takes the opportunity to look through the data and analyze how the sector has performed in terms of users behavior, transactions on chain, fundraising and price performances. We also discuss a few conundrums faced by the industry.

The events of 2022 highlighted a fundamental contradiction in combining the two verticals: Gaming and Finance. Gamers play games to have fun, while people participate with financial incentives to make money. A few key data points in this report show that the projects built upon hype and an unsustainable play-to-earn model collapsed the hardest during this downturn.

The report delves into the performance of each chain in the gaming ecosystem. We further examine the top GameFi tokens and how they performed amidst the H1 2022 bear cycle — most protocols have seen a sharp drop in both price and users.

The critical question remains: how can developers enable people to play and earn rather than toil and yield? How can GameFi titles be built to be sustainable?

Even though the data shows that investors are bullish on GameFi — GameFi and metaverse projects had large influxes of VC funding relative to other categories in the blockchain industry — no single smart contract platform managed to fully capitalize and become the go-to “GameFi chain.”

At the end of this report, we highlight the chain that could take this spot and propose a few games to watch in H2 2022.

From early 2022, the whole market has been trending downward amidst the harsh macro conditions and rising inflation. The fall in the equities market, broadly represented by the S&P 500 index, took BTC — now having absorbed billions in institutional funding — down with it. And in turn, BTC has taken the altcoin market along with the ride.

The Fear & Greed Index reached an extreme fear state, and GameFi active users, measured by the unique wallet addresses interacting with the protocol smart contracts for a certain period of time, gradually declined. Although the Fear And Greed Index has recovered from around 10 (Extreme Fear) in late June to now 42 (Fear), the crypto market is yet to react strongly with meaningful price actions.

In terms of volume, Ronin, BNB (previously BSC), and Harmony outperformed all others by a wide margin. In the case of BNB, low transaction fees and its ease to build drove a multitude of projects coming aboard. However, Ronin and Harmony are singularly dependent on their ecosystem's most prominent titles — Axie Infinity and DeFi Kingdoms — driving volume.
In terms of transactions (Txn) and average users in H1 2022, gaming-focused chains WAX and Hive remained the top two.

Mainstream hype during the bull market has not been a good indicator of sustainability or future success.

Neither Axie Infinity, the first crypto game to become a household name with all of its news coverage, nor STEPN, the first move-to-earn title, is even close to the Top 3 games by the number of average active users currently. They came and went.

On the other hand, Alien Worlds and Splinterlands, two titles that are unheard of outside the GameFi space, now dominate. Even after declines in price, users continued to enjoy playing them, even for less ROI.While Splinterlands led Alien Worlds with almost double the number of active users in the first half of 2022, it experienced a sharp decline in users in June. This is possibly due to the end of the season on June 1, a revision of its ranked reward system, the drawdown of the crypto market, or a combination of all factors. While they’re not the only fun games, they avoided the runaway asset inflation that put other titles in boom-and-bust cycles.

A dominant, go-to chain for GameFi projects has yet to emerge. It's too early to predict long-term leaders.

WAX and Hive, the two largest GameFi chains by number of transactions, are still hugely reliant on the success of Alien Worlds and Splinterlands users, respectively, which comprise 54.55% and 99.85% percent of their total gamers. Neither chain was purpose-built for these titles like Ronin for Axie Infinity.

BNB is the third largest chain by gaming transactions and gamers, and no one title dominates its ecosystem. However its potentials still wait to be unlocked once it starts to host a standout game.

Another game which is highly anticipated, Illuvium, is set to launch on Ethereum, as is Big Time, another upcoming game with significant funding. STEPN expanded to Ethereum as well.

Top games DeFi Kingdoms and STEPN expanded to 2 chains each in March 2022 to gain users and disperse risk but ran into issues involving tokenomics. StepN originally launched on Solana. When it expanded to the BNB Chain, the price disparity for GST (the utility token) on BNB Chain grew to a peak of 9X that of GST on Solana, mainly due to a lack of cross-chain bridge and disparate demand skewed on the side of BNB Chain. While the price disparity of GST on these two chains has drastically reduced after the crypto drawdown, the latest launch of GST on Ethereum shows a price discrepancy again, highlighting one of the challenges of creating a multi-chain ecosystem.

Animoca Brands has said that its soon-to-be-launched AAA title, Phantom Galaxies, will be a multichain experience.

With its subnet technology, Avalanche aims to make it easier for games to build out on multiple chains (i.e., their own network on AVAX infrastructure) - they've already attracted Defi Kingdoms and Crabada to subnets.

BNB and Ethereum are still the richest chains in the gaming ecosystem, with more than 582 and 538 projects on each, respectively.

BNB, which was originally the chain with the most new game projects per month, has had significantly fewer new games since the bear market started in May. Other chains have largely maintained a relatively steady stream of additions, with Polygon having the most relative growth, followed by WAX. Although there are many chains, it can still be seen that the gaming developers still prefer Polygon, WAX and BNB, which are more friendly to games with their low fees.

As for the number of active users in the top five chain ecosystems, WAX expanded to 370K by the end of July, but Hive experienced a significant decline in early June from 360K to 140K, due to the steep fall in active users on Splinterlands — the dominant game on the Hive blockchain.

Based on the share of each project on the chain, BNB has a relatively robust and diversified ecosystem. This is supported by the fact that the gaming volume for the top competing games on BNB each does not exceed 25% of the total volume. This is a more balanced setup compared to Ronin or Harmony, where the head projects hold 100% and 99.8% of total volume. Since GameFi is highly volatile, with even top titles collapsing into death spirals, diversification could make ecosystems more resilient in market downturns.

Although the bear market came in May, the GameFi market's mood has been uncertain since December 2021. Users have realized how the GameFi death spiral works, where a drop in either token price or players sets off a self-reinforcing downward cycle in both. As it stands, ”play-to-earn” only works with a sustainable supply of new players joining the game. Skepticism of many games' futures has prompted more users to mint and sell assets quickly.

Token prices and market caps are steeply trending to the downside, but some projects have managed to grow. For example, the price of BinaryX's token increased 8x from its lowest point to $147 on June 14, an upward swing that began after the game made an upgrade in March that included new gameplay plus a new minting and upgrading mechanism for NFTs.

Once a highly hyped project in the recently trending move-to-earn sector, after the onset of the bear market, STEPN has seen a sharp drop in various metrics including GMT token active holders, new holders and deposits. GMT still has the highest trading volume at $1.1 billion.

In terms of the deals funded, Epic Games received the most with $2 billion investments from Sony Group Corporation and KIRKBI in April 2022. In terms of the number of projects, Animoca Brands leads with 52 projects invested in one year covering GameFi, metaverse, guilds, and so on.

Investments in GameFi and Metaverse are still concentrated in the seed round, making up 48% of the total deals which signifies that the market is still in the early development phase.

What will matter in GameFi soon is whether the handful of highly-anticipated, expensive titles will live up to the hype.

The narrative in GameFi is that current games lack quality and have unsustainable tokenomics. However, once AAA games come out, these will bring GameFi to the masses after the bear market, solving much of the current problems.

Illuvium the game itself is yet to be launched, however it has gathered great interest as it promises to be the first major AAA game and has a star team of blockchain and game developers behind it.

Phantom Galaxies, which is a joint project between Animoca Brands and Blowfish Studios, offers a taste of what will likely be the future of blockchain game development —  collaboration between proven studios in traditional gaming and blockchain, with enormous resources to get projects off the ground.

Big Time is being developed by Big Time Studios, founded by Decentraland co-founder Ari Meilich. It promises gamers a true AAA RPG experience, plus an easier onramp with its own hosted wallets.

The teams behind these projects have a record of success in both blockchain and gaming, and the resources to potentially make a AAA title work.

Will they win over the regular gaming market? If they do, will the chains be able to handle the influx of users? Those betting big on Web3 and blockchain gaming should be holding their breath right now, hoping they perform as well as people expect.

The future doesn't always belong to the newest thing. While many chains are doing exciting things, Ethereum still holds the most mindshare and has the biggest developer community by far.

Combined with the development progress the Ethereum Foundation is making on the efficiency and scalability front, the chain could easily take a significant share of the GameFi market if it performs well, as the influx of chains was primarily driven by Ethereum’s congestion and high gas fees.

Both Illuvium and Big Time will run on Ethereum, and STEPN has already expanded to Ethereum. Depending on ETH's scaling solutions and how well it handles congestion, it may become the go-to chain for gaming. These developments will align to stress test Ethereum upgrades.