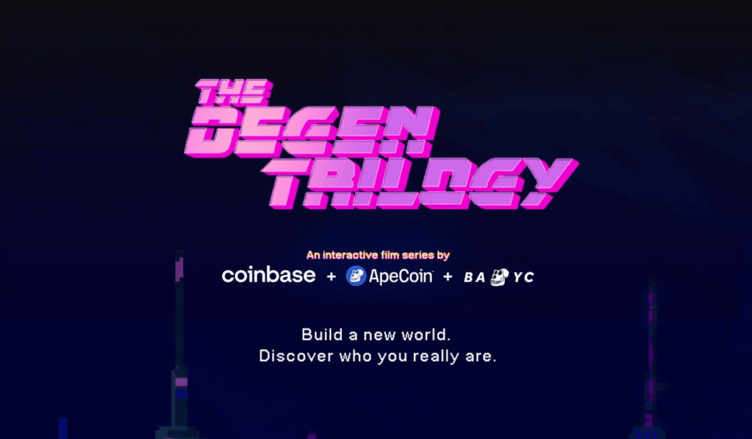 If you have been dreaming of your big break in Hollywood, Coinbase may just have given you another chance.

The exchange put its own spin on a popular crypto slang term by announcing its cooperation with BAYC and ApeCoin for an interactive three-part film series. The so-called "Degen Trilogy" promises to "build a new world" and "discover who you really are."

Bored Ape NFT holders will be able to submit their ape for casting, while Mutant Ape holders have to wait until part two of the series to get a chance for their apes to feature.

Ape holders will be able to get $10,000 worth of ApeCoin or Bitcoin as compensation deposited into their Coinbase account. If the ape changes owners, its "movie-starring license" changes hands, too, but not the remuneration. The film's premiere will be at NFT.NYC in June 2022.
William Swann, Coinbase's culture marketing director who was hired from traditional entertainment to head the exchange's media arm, said:

"You can think of this as a love letter to the NFT tech that has provided so much creative liberation for artists.

We really look to [Bored Apes] as sort of our North Star in the NFT space. They've created such a massive and engaging community."

According to Swann, Yuga Labs, the company behind the Bored Ape Yacht Club, will not be involved with the production, but will have a say on the film's approval. Yuga Labs CEO Nicole Muniz said she was excited to see how the "breakthrough project" shapes the future of Web3 for all communities.

The Degen Trilogy's plot will reportedly be set in a chaotic Midtown Manhattan that sees digital goods and services outpacing all other indicators for the first time as a measure of value in the market. The prologue further explains:

"As the old system crumbles, whole new realms spring forth from the ashes. [...] Enter the Degens. A new class of social adept, versed in the constantly re-invented tools of an ever accelerating economy."

Cynics may say that in the face of accelerating inflation, the movie could just as well take place in the near future…but that will probably be for viewers to judge. Either way, it marks another impressive milestone of the Bored Apes' push into mainstream culture following the recent launch of ApeCoin.
This article contains links to third-party websites or other content for information purposes only (“Third-Party Sites”). The Third-Party Sites are not under the control of CoinMarketCap, and CoinMarketCap is not responsible for the content of any Third-Party Site, including without limitation any link contained in a Third-Party Site, or any changes or updates to a Third-Party Site. CoinMarketCap is providing these links to you only as a convenience, and the inclusion of any link does not imply endorsement, approval or recommendation by CoinMarketCap of the site or any association with its operators. This article is intended to be used and must be used for informational purposes only. It is important to do your own research and analysis before making any material decisions related to any of the products or services described. This article is not intended as, and shall not be construed as, financial advice. The views and opinions expressed in this article are the author’s [company’s] own and do not necessarily reflect those of CoinMarketCap. CoinMarketCap is not responsible for the success or authenticity of any project, we aim to act as a neutral informational resource for end-users.
17 people liked this article

Crypto News
Ethereum Can Scale 100X Within Weeks, Vitalik Buterin Says
Will this serve as a sticking plaster until the Proof-of-Stake upgrade is completed?
Oleh Decentralized Dog
1 year ago
2m
Crypto News
Pornhub Goes Crypto Only and Says It Is Being 'Targeted' By Visa and Mastercard
The adult website informs users that credit cards cannot currently be accepted — directing customers to use digital assets instead.
Oleh Decentralized Dog
1 year ago
5m
Crypto News
Tornado Cash Grappling With Fallout, as Discord Goes Offline and Dev Is Arrested
After being blacklisted by the U.S. federal government, the bad news came thick and fast for the crypto mixer.
Oleh Ivan Cryptoslav
1 month ago
2m
See all articles