Bitcoin vs S&P 500 – A Comparison
Daftar Isi
What Is Bitcoin?
What Is the S&P 500?
Bitcoin and the S&P 500 - Head-to-head
Similarities
Differences
Do We Have a Winner?
Conclusion
Trading

New to financial markets? Not sure what's the most profitable investment option? Here is a detailed and neutral analysis of Bitcoin and S&P 500, an asset class that generates ~10.5% return. 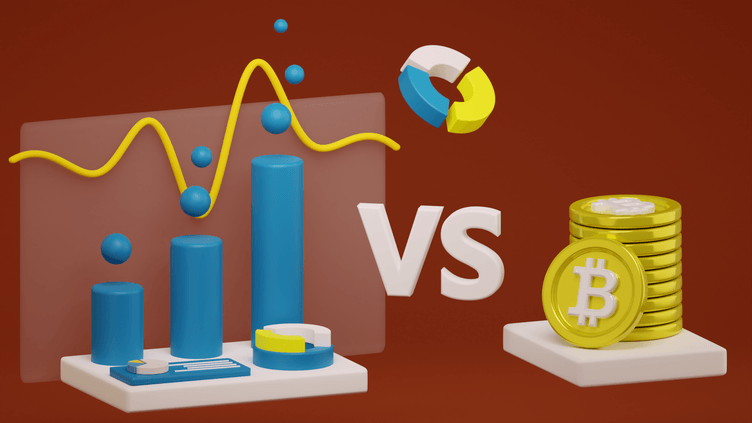 In financial markets, commodities, bonds, stocks, and indices are generally considered to be the most popular instruments to trade. With crypto’s rise in the past years, more and more people – especially the younger generation – are starting to swap out these instruments for Bitcoin. In today’s article, we compare Bitcoin to the S&P 500, one of the major stock indices in the United States.

Most of you know what Bitcoin is. Satoshi Nakamoto (the inventor of Bitcoin, who to this day remains pseudonymous) created Bitcoin to become “a purely peer-to-peer version of electronic cash” to allow parties to transact online, without the interference of or need for an intermediary.

It took a while for this idea to gain popularity, and the popularization of Bitcoin eroded the idea in a sense. Rather than being peer-to-peer electronic cash, Bitcoin is – by many – considered to be closer to digital gold. Nevertheless, this innovation has quickly risen to become one of the most valued asset classes in the world.

Banks and brokers now offer Bitcoin to their clients, legitimizing it as a financial instrument in the same list as commodities, bonds, stocks, and indices.

The S&P 500 – or Standard & Poor’s 500 – is an index that tracks the performance of 500 major publicly traded companies in the United States. It weighs the companies in the index by market capitalization, which means larger companies have a bigger influence on the overall performance of the index than smaller companies. Apple, Microsoft, Amazon, Tesla and Alphabet (the parent company of Google) alone make up about 23% of the index. This “top-heavy” index weighting is unique in S&P’s history. The index was launched in 1957 and has generated an average return of 10.5% per year since then.

It is considered to be one of the most accurate gauges of the performance of the companies in the index, although some people argue this accuracy has waned as a result of quantitative easing over the past years.

Nevertheless, the majority of market observers follow the S&P 500 closely as an indicator of the health of markets as a whole or invest in it as a long-term play on the growth of the U.S. economy.

Let’s look at a comparison between the two and identify the differences. The charts below show the performance of both the S&P 500 (left) and Bitcoin (right) over the past 2 years.

It is obvious that both the crypto and stock market have benefited greatly from the monetary policy over the past years. Both markets have seen tremendous growth between 2020 and 2022. While Bitcoin already lost most of its momentum over a year ago, the S&P 500 continued to rally for another year, only losing steam at the end of 2021.
Regardless of this discrepancy between the performance of Bitcoin and the S&P, the two have become more and more correlated over time. Recent data published by Arcane Research showed the 90-day correlation between Bitcoin and the S&P to be as high as 0.49. Even though hard-line stock investors and bitcoin-bugs frequently go at each other’s heads, the two behave more similarly than many think.
In fact, some even deem the current price behavior of Bitcoin to be mimicking the S&P between 1999 and 2015, albeit at a faster pace. The chart below shows the comparison many analysts like to make. I personally think the similarities are limited and the past performance obviously does not guarantee the performance in the future, but it’s still an interesting discussion. Can you imagine if Bitcoin goes on a rally like the S&P has been on since ‘08?

Another major difference in my opinion lies in the nature of the asset. As discussed, the S&P is a basket of over 500 long-standing companies that have stood the test of time. These companies generate revenue and create real-world value. The intrinsic value of the S&P is therefore quite easily measurable using various revenue, cash-flow, or profit-based models.

With Bitcoin, its value is far more speculative. Although both the S&P and Bitcoin are valued by the market (by means of demand and supply), there are no revenue streams, dividend payments or annual reports to gauge the potential value of bitcoin. This lack of “data” is part of the reason why I personally consider Bitcoin to be much closer to a commodity than a stock index.

Do We Have a Winner?

The debate concerning the differences and similarities between Bitcoin, the S&P 500, gold or other financial instruments is very interesting, albeit perhaps unproductive. We can endlessly discuss the superiority of one over the other or just bicker about their differences. I personally think that all asset classes have their own uses and diversification can be very profitable in a portfolio.

If you are currently investing money in crypto markets (or stock markets for that matter!), why not explore the other side? You might find an edge that you were unaware of or realize that the unexplored market is much more interesting than you thought it was. The point is to try new things out, and judge based on that experience rather than assumptions. I for one found experimenting with the stock market to be very insightful, and it helped broaden my understanding of what makes markets move. Especially considering the correlation between markets, this understanding is highly beneficial.

To conclude, there is a use for Bitcoin and the S&P 500, and I don’t consider the one to be superior to the other. I suggest experimenting with different financial instruments and to broaden your horizons. You might struggle for a while, but in the end, you will acquire new skills and knowledge.

As usual, please remember this article is based on my own experiences in trading, and it does not constitute advice. Do your research, try new things out and let’s continue to make some money!

Crypto Basics
Bitcoin: The Pros and Cons of Hot and Cold Storage
With the crypto market growing every day, how should you be storing your crypto?
Oleh Decentralized Dog
1 year ago
5m
Crypto Basics
Fully Diluted Market Cap — How Emissions Kill Tokens in a Bear Market
Fully diluted market cap is the valuation if all tokens — the maximum supply — are in circulation. But why does this matter, especially in the current bear market?
Oleh Ivan Cryptoslav
1 week ago
6m
Crypto Basics
What Does Vesting Mean in Crypto?
Vesting periods, vesting schedules, token unlocks and vested tokens. What exactly do these mean, and how does it affect the circulating supply of a cryptocurrency? Read on to find out more.
Oleh Daniel Phillips
1 month ago
6m
See all articles