10 Kickass Films and Books You Should Read to Understand Blockchain and Cryptocurrency
Daftar Isi
The History and Basics of Cryptocurrency
1. The Basics of Bitcoins and Blockchains - Book
2. Digital Cash: The Unknown History of the Anarchists, Utopians, and Technologists Who Created Cryptocurrency - Book
3. A History of Money: From Ancient Times to the Present - Book
4. Netflix Explained: Cryptocurrency - Movie
Long Term Prospects
5. Cryptopia: Bitcoin, Blockchain and the Future of the Internet - Movie
6. Trust Machine: The Story of Blockchain - Movie
Fiction
7. Life on Bitcoin - Movie
8. Crypto - Movie
About Satoshi Nakamoto
9. I am Satoshi - Movie
10. The Book of Satoshi: The Collected Writings of Bitcoin Creator Satoshi Nakamoto - Book
Crypto Basics

Not interested in reading technical articles or watching complex YouTube videos to understand how Bitcoin emerged? Here is a list of movies and books that can help you out! 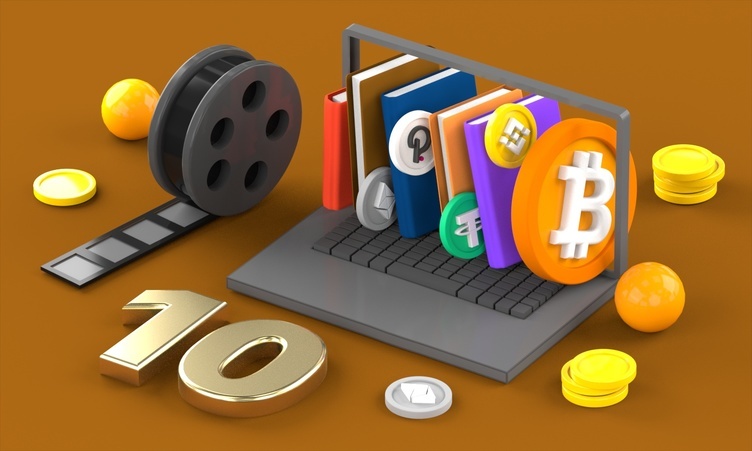 It has been well over a decade now since blockchain technology took over the market and dominated every field in the financial sphere as it possibly could.

This change in the crypto world has been so swift that it is nearly impossible to cover its basics in one sitting. Movies and books are two of the most imaginative and engaging fields of human consumption. If you cannot grasp facts about the second world war from reports and journals, you can always choose to watch Saving Private Ryan and Stalingrad or read The Diary of a Young Girl. If you watch a few movies and read a few books on the event, you'll know more about it than the average person.

Crypto is also similar to this. The layman is not aware of its mechanisms and so, if you want to learn about crypto, you have to turn to the web. An easier alternative would be watching movies and docuseries and reading books about blockchain tech.

Following is a list of 10 kickass books and films you should read to understand blockchain and cryptocurrency.

The History and Basics of Cryptocurrency

If you're an absolute beginner with zero exposure to the cryptocurrency industry and Blockchain technologies, the following are some of the books and movies that will take you there step by step.

1. The Basics of Bitcoins and Blockchains - Book

The Basics of Bitcoins and Blockchains by Antony Lewis provides a vast overview of the crypto world. Lewis himself is a cryptocurrency specialist, a perk that helped him dissect the complex mechanism and present it with such ease. The core focus of the book is not cryptocurrency, though, it is blockchain technology. Lewis provides a very well-rounded take on the many applications of revolutionary blockchain technology.

2. Digital Cash: The Unknown History of the Anarchists, Utopians, and Technologists Who Created Cryptocurrency - Book

The book by Finn Burton talks about the history of Bitcoin in much detail. It explains what Bitcoin is, where it emerged from, and what led to its emergence. “Digital Cash" is a great way to gain some heavy background knowledge on the crypto world and the creation and introduction of Bitcoin in the world. The evolution of Bitcoin is something most people tend to oversee. However, Burton captures it perfectly, mentioning in detail the predecessors of BTC and how Bitcoin functioned in its earliest stages.

3. A History of Money: From Ancient Times to the Present - Book

Taking a more general direction, "A History of Money" by Glyn Davies brings forth an account of how money and wealth have been used in history. The book takes a more general route and talks about how businesses at different times in history have used money. Although published in 1996, way before the cryptocurrency market exploded, it is a great read to get an in-depth understanding of the value that money has had throughout history.

Netflix explained is a collection of short docuseries where each documentary is hardly above 20 minutes. While this is nowhere near an actual film, the Netflix Explained series is extremely well-researched and well-executed and can give you all the necessary information you need about cryptocurrency without bombarding you with technical facts that you cannot decipher.

5. Cryptopia: Bitcoin, Blockchain and the Future of the Internet - Movie

The Story of Blockchain is a film that focuses on the innovative aspects of cryptocurrency and blockchain technologies. It identifies the blockchain as one of a kind innovation and explores the technology's potential in both the virtual and real world.

The mechanism and system of the blockchain are intricately explained in the film and its prospective impacts upon the world are marked by adding in expert opinions.

Fiction is one of the most absorbed forms of media in the history of the world. Humans are simple creatures. We love stories, therefore, stories that inform us of important things are the best way to learn.

Life on Bitcoin follows the lives of a couple, Austin and Becky, and their decision to use Bitcoin for their day-to-day transactions. The film attempts an experimentative approach towards the common complaint that Bitcoin and other forms of cryptocurrencies are non-compatible with daily life usage. The main characters take up the challenge of dealing solely in Bitcoins for 100 days, and the film follows their attempts at making cryptocurrency work in the real world where it still isn't mainstream.

Released in 2019, "Crypto" stars some notable names, like Kurt Russell, Beau Knapp, and Luke Hemsworth. The film's premise is purely fictional and it falls under the genre of crime thrillers. As the genre suggests, the movie looks into the security breaches and the probable lack of privacy that Bitcoin could have exposed to the world, despite being known for its encryption and tight security.

Wondering about who founded the world's biggest cryptocurrency, and why are they so mysterious? The mystery behind the identity of the character is more than simply a public intrigue. It is crucial to the public to know who is Satoshi Nakamoto.

Bitcoin, founded by this person or group, is now a multi-billion dollar asset with millions of people placing their trust in it. If anything were to go wrong, many people believe that the identity of the founder should be known to the public to ensure accountability. The book and film listed below dive deep into the identity and thought process of Satoshi Nakamoto.

"I Am Satoshi '' is a much-needed film for those dealing in Bitcoins. The cryptocurrency has been around for well over a decade now, yet the founder remains a mystery. The film takes an in-depth look into the people or person behind Bitcoin.

Satoshi Nakamoto is a pseudonym that the founder or founders of Bitcoin have stayed anonymous behind. The movie attempts to solve the mystery by applying various research procedures to get a glimpse into who Satoshi Nakamoto could be.

10. The Book of Satoshi: The Collected Writings of Bitcoin Creator Satoshi Nakamoto - Book

When Bitcoin was first launched, Satoshi Nakamoto wasn't a ghost. They had a "public life" in the form of their posts on forums and his emails. Later on, the character vanished. This book is a collection of all emails Satoshi Nakamoto posted on different forums and their "seminar paper". Basically, all snippets of Nakamoto's written work or public life have been branded together, alongside a detailed introduction of Bitcoin itself. This is an attempt to understand the identity and mindset of Satoshi Nakamoto.

Crypto Basics
What Is the Nakamoto Consensus?
The Nakamoto Consensus gave birth to blockchain as we know it — what makes it so different from consensus mechanisms that came before it?
Oleh Decentralized Dog
1 year ago
5m
Crypto Basics
3 Minute Tips: The Different Types of Decentralized Exchange (DEX)
The DEX landscape is as varied as it is vast, however, there are three major types of DEXs that you should know about before choosing the best platform for your needs.
Oleh Daniel Phillips
11 months ago
4m
Crypto Basics
How to Make Money in the Metaverse?
From simply playing games to throwing thousands of dollars to own properties, here is a list of top ways to make money in the metaverse!
Oleh Aden Batool
5 months ago
7m
See all articles