What Is Arbitrum? The Ultimate Guide to the Arbitrum Ecosystem

CoinMarketCap Alexandria takes a look at one of the top layer-2 scaling solution Arbitrum, its ecosystem and a potential token airdrop in the near future. 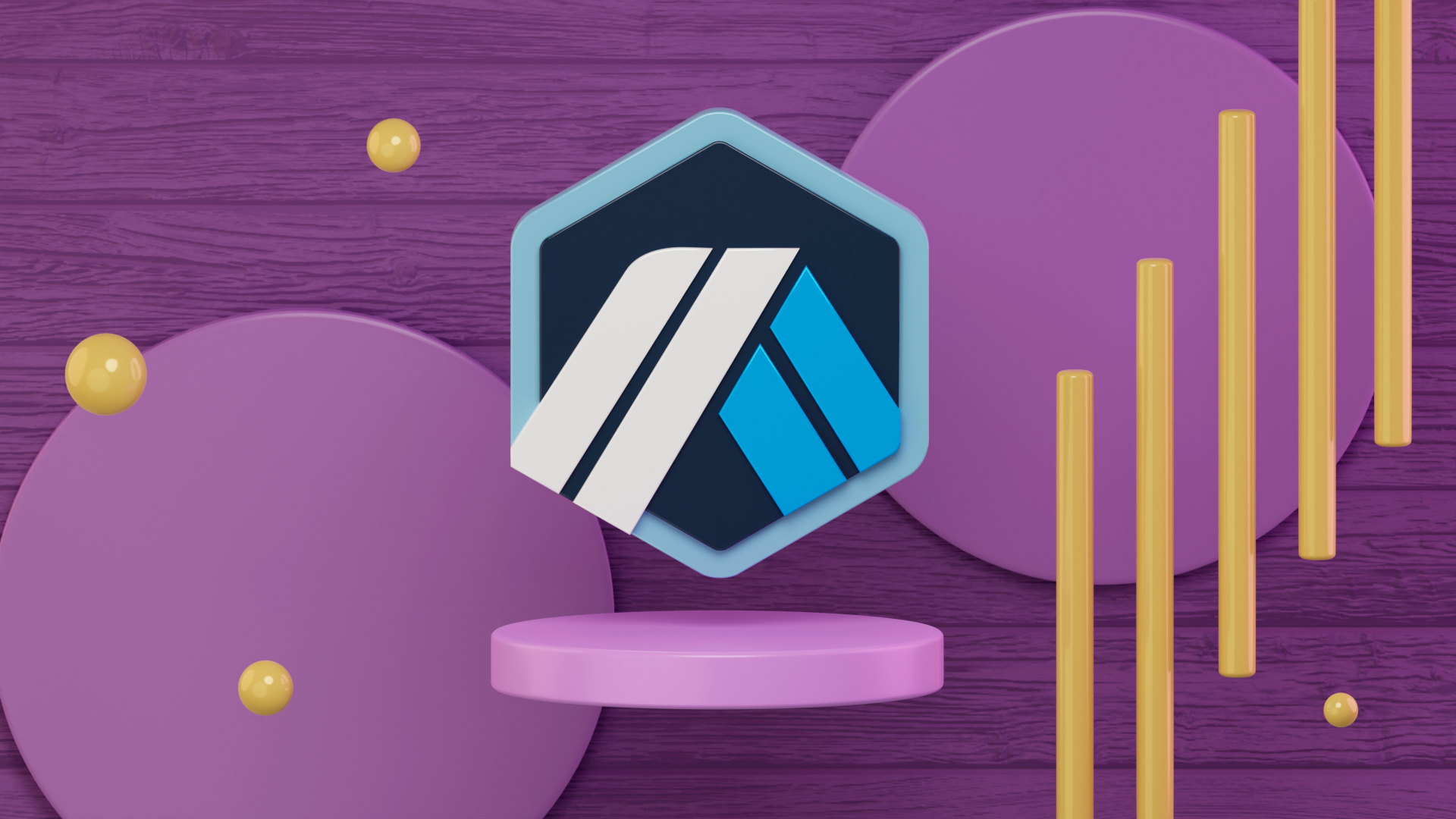 The Ethereum Merge could happen as soon as August 2022, but layer-two (L2) solutions are already working on scaling Ethereum.
Arbitrum is one of the main L2 solutions relieving the Ethereum mainnet from congestion and high gas fees. In this guide to the Arbitrum ecosystem, CoinMarketCap Alexandria looks at:
Subscribe

Arbitrum vs Optimism vs ZK-Rollups

Arbitrum is not the only L2 solution using optimistic rollups. Optimism (OP) is another layer-two chain that launched its OP token in June 2022 with an airdrop. Arbitrum and Optimism share many similarities:

Their main differences are:

As you can see, the differences are mostly technical and of little interest to the everyday user. Arbitrum, however, boasts a significantly bigger ecosystem with more total value locked (TVL) ($1.5 billion vs $300 million) and more active DApps.
There are also a couple of differences between Arbitrum and ZK-rollup solutions:

Arbitrum is started by Offchain Labs, a development company from New York founded by Ed Felten and Steven Goldfeder is behind the development of Arbitrum. Offchain Labs has received a total of $123.7 million in three investment rounds from 2019 to 2021.

An initial seed round in 2019 raised $3.7 million and was led by Pantera Capital. The Series A round in April 2021 raised $20 million, with the Series B in August 2021 raising another $100 million from Lightspeed Venture Partners and other investors like Polychain Capital, Ribbit Capital, Redpoint Ventures, Pantera Capital, Alameda Research and Mark Cuban.

The Arbitrum Beta Mainnet launched in May 2021, followed by the mainnet launch in August 2021 and sidechain support in Q1 of 2022. There are currently more than 80 DApps running on Arbitrum. According to Arbiscan, Arbitrum boasts over 720,000 unique addresses as of June 2022 and is growing fast. Between 50,000 and 100,000 transactions per day are processed, and Arbitrum has almost $1.5 billion in total value locked.

Arbitrum does not have a token yet. However, considering that its competitor Optimism launched its OP token with an airdrop, Arbitrum will likely introduce an Arbitrum native token in the future. If you want to be eligible for an Arbitrum token airdrop, you should bridge to the Arbitrum ecosystem and use some of the Arbitrum DApps listed below. Here is also our guide to airdrops called What Are Crypto Airdrops.

How To Use Arbitrum

You can use Arbitrum with a few simple steps:

The Best DEX on Arbitrum

The best decentralized exchanges (DEX) on Arbitrum are:

SushiSwap (SUSHI) is a decentralized exchange (DEX) that launched as a fork of Uniswap. It is one of the biggest decentralized exchanges on the market and has a total value locked of over $300 million on Arbitrum. Users can swap different tokens, borrow and lend, and provide liquidity all without giving up custody of their funds.

GMX is a decentralized spot and perpetual exchange that prides itself on its low swap fees and deep liquidity that guarantees trading with zero slippage. GMX differs from traditional order book models in that it does not support trading pairs. It instead provides liquidity through its multi-asset GLP (GMX Liquidity Provider) to execute trades. Users trade against the automated market maker (AMM), which gets prices through an oracle.

Furthermore, GLP holders receive esGMX, which can be converted to GMX tokens after one year. They also receive 70% of the platform’s revenue. GMX tokens can be staked to receive esGMX, a 30% share of the platform’s revenue, and multiplier points for GMX. This intricate token design and staking incentives allowed GMX to become the second-biggest protocol on Arbitrum with over $300 million in total value locked.

Curve (CRV) is a stablecoin DEX and one of the most important exchanges for swapping stablecoins. It was one of the first exchanges that popularized the AMM model. Curve is available on nearly every relevant blockchain and boasts a TVL of over $150 million on Arbitrum, making it one of the biggest protocols of the ecosystem.

Uniswap (UNI) is a decentralized exchange and one of the biggest DEXes by TVL in DeFi. Although it has significantly less TVL on Arbitrum than its rival Sushiswap, Uniswap came up with the AMM principle that allows users to trade without a counterparty and only against a liquidity pool controlled by a smart contract. On Arbitrum, Uniswap has a TVL of over $50 million as of June 2022.

Balancer (BAL) is another DEX, which uses shared pools and smart pools for token swapping. Balancer works similarly to Uniswap and Curve and enables anyone to create token pools with automatically adjusted pool weights. Its TVL on Arbitrum is smaller than that of its competitors, but Balancer still boasts over $15 million in total value locked.

Synapse (SYN) is a cross-chain bridge connecting several L1 and L2 blockchains. Cross-chain multi-party computation validators secure the Synapse bridge and the ecosystem is powered by the Synapse token — SYN. The Synapse DAO employs SYN as an incentive for liquidity providers to enable the protocol’s cross-chain functionality and as a subsidy to pay for gas expended by network validators. Synapse is one of the most important bridges to Arbitrum besides the official Arbitrum bridge and has a TVL of almost $30 million.

The Best Lending Protocols on Arbitrum

The best lending protocols on Arbitrum are:

dForce (DF) strives to provide DeFi infrastructure in web3 through lending, trading and staking services. dForce is a community-driven DAO with dForce USD (USX) as a stablecoin at the heart of its protocol matrix. This algorithmic stablecoin implements a pool-based and vault-based model with a hybrid interest rate policy. It is powered by protocol-to-protocol integrations and a cross-chain bridge to facilitate its adoption. dForce also provides lending, staking, trading, and bridge services as part of its all-in-one DeFi infrastructure solution.

Stargate Finance (STG) is a fully composable liquidity protocol. It allows users to transfer assets across blockchains and access the protocol’s unified liquidity pools with instant guaranteed finality. Stargate’s key products are cross-chain transfers, liquidity provision to its omnichain protocol, yield farming for STG rewards, and staking to receive veSTG, the protocol’s governance token. Stargate Finance has over $100 million in TVL on Arbitrum.

Aave (AAVE) is a DeFi money market protocol and lending platform that allows users to borrow and lend different crypto assets. Users can deposit their crypto assets in different liquidity pools and earn interest on them or borrow against their existing crypto holdings as collateral. Aave is one of the biggest lending protocols in decentralized finance and boasts over $30 million in total value locked on Arbitrum.

Vesta Finance (VSTA) is a lending protocol allowing users to obtain maximum liquidity against their crypto collateral without paying interest. Users can deposit several cryptocurrencies as collateral and mist VST, a USD-pegged stablecoin.

The Best NFT Marketplace on Arbitrum

Treasure DAO (MAGIC) is an NFT marketplace that wants to bridge the gap between NFTs and DeFi. Its Bridgeworld metaverse is the protocol’s flagship product, which offers DeFi functionality like staking and mining MAGIC tokens, providing liquidity, and trading NFTs on the marketplace. Treasure DAO is also working on an increasing number of partnerships with other DeFi protocols and NFT projects.

The Best DApps on Arbitrum

Some of the best DApps on Arbitrum include:

Dopex (DPX) is a decentralized options protocol. It aims to maximize liquidity provision while keeping losses for option writers to a minimum. Dopex implemented a rebate system for losses based on exercised options for every epoch. Options writers receive rebates based on their percentage losses and are paid in the protocol’s rebate token rDPX. This allows options writers to engage in sophisticated trading strategies that go beyond regular hedging. Dopex also boasts constant innovation in the form of its Atlantic options and has partnerships with several DeFi protocols like OlympusDAO and Jones DAO.

Beefy Finance (BIFI) is a multi-chain yield optimizer platform, where users can earn compound interest on their crypto assets. Beefy Finance deploys user funds locked in vaults across the DeFi ecosystem and applies several investment strategies to ensure the maximum possible yield. The BIFI token is the “dividend-eligible” revenue share in Beefy Finance that token holders earn profits with.

Sperax USD (USDs) is an algorithmic stablecoin and crypto-collateralized stablecoin hybrid. It boasts an 11% auto-compounding APY. Its SPA governance token can be staked to receive protocol fees and a share of USDs auto-yield and staking incentives.

Jones DAO (JONES) is a yield-maximizer and liquidity protocol for options. It is built on top of Dopex and enables one-click access to options strategies for users that do not want to manage their options investments themselves. Jones DAO offers vaults for multiple assets and risk profiles.
This article contains links to third-party websites or other content for information purposes only (“Third-Party Sites”). The Third-Party Sites are not under the control of CoinMarketCap, and CoinMarketCap is not responsible for the content of any Third-Party Site, including without limitation any link contained in a Third-Party Site, or any changes or updates to a Third-Party Site. CoinMarketCap is providing these links to you only as a convenience, and the inclusion of any link does not imply endorsement, approval or recommendation by CoinMarketCap of the site or any association with its operators. This article is intended to be used and must be used for informational purposes only. It is important to do your own research and analysis before making any material decisions related to any of the products or services described. This article is not intended as, and shall not be construed as, financial advice. The views and opinions expressed in this article are the author’s [company’s] own and do not necessarily reflect those of CoinMarketCap.
7 people liked this article

Tech Deep Dives
A Deep Dive Into EigenLayer
Touted as one of the most novel innovation in the Ethereum ecosystem in 2023, what exactly is EigenLayer? Read on to find out.
Por Ivan Cryptoslav
5 days ago
8m
Tech Deep Dives
The Ultimate Deep Dive Into Bitcoin's Security Model
Is Bitcoin's current security model flawed? What could be done to the Bitcoin network to ensure it is sustainable? Read on to find out.
Por Ivan Cryptoslav
1 week ago
14m
Bitcoin
The Return of the $90M Blockchain Bandit
A thief using software that guessed obvious passwords robbed 10,000 crypto owners between 2015 and 2016, then disappeared. Now the stolen funds are on the move.
Por Leo Jakobson
1 week ago
2m
See all articles