CoinMarketCap and Nansen look at the latest happenings in the metaverse — from ex-Apple exec heading up Disney's metaverse unit, to Mastercard's Pride Plaza launch on Decentraland and Meta. 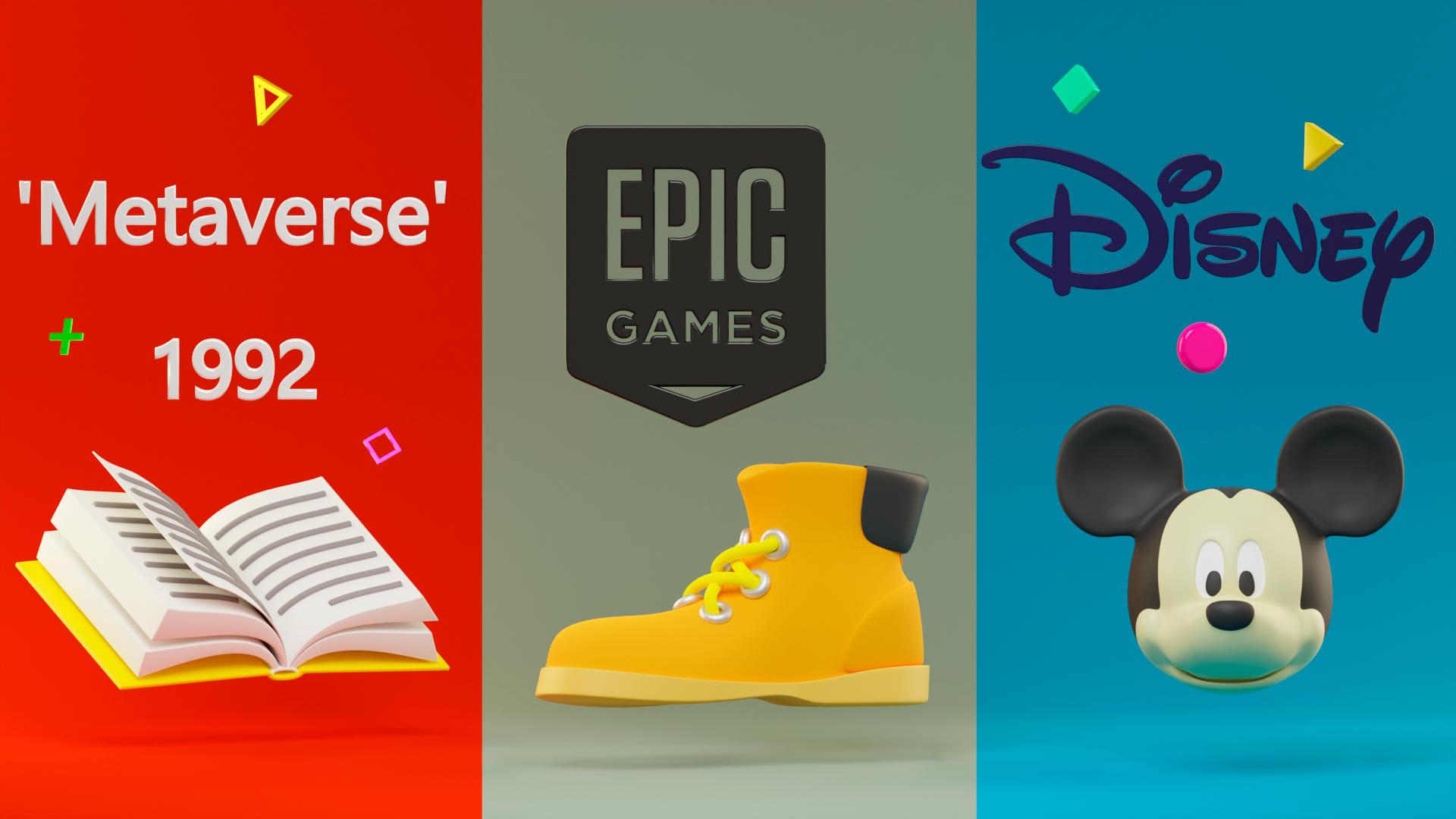 Here’s a rundown of some of the top metaverse stories over the past week.
Subscribe

First, a look at the broader metaverse market.

The past week has been a rough week for the general crypto market and metaverse NFTs have not been spared. The Nansen Metaverse-20 Index is up 5.62% in ETH terms but down 57% in USD terms year to date.  Most collections are down double digit percentages over the last week, with RTFKT’s PodX being the worst hit. Interestingly, we see that Sandbox Land floor price has increased 20% the last month and is up 2% the past week.
Does such data interest you? Sign up for a free Nansen account and start exploring today!

In a bid to ramp up its Web3 presence and activities, Disney has hired ex-Apple gaming executive Mark Bozon to help steer its metaverse unit.

Bozon, who worked in Apple’s creative and gaming segment for 12 years, will serve as Disney’s VP of next generation storytelling and creative experiences. He is tasked with the responsibility of building a team that will work on “interconnected consumer experiences across immersive new storytelling canvases” while collaborating with colleagues from across Disney’s various businesses.

“I’m headed to Disney! Beyond thrilled to work with the best and brightest creative minds in the world. What an absolute dream come true. As a lifelong fan I’m humbled and excited to get started,” said Bozon in a LinkedIn post.
Disney has beefed up its executive leadership in recent times. Disney exec Mike White, who hired Bozon, was recently brought in to lead the company’s metaverse efforts. In March, Jeremy Doig also joined Disney Streaming as chief technology officer.

As far as the metaverse goes, CEO Bob Chapek has voiced his support for the nascent industry several times. In a January interview published by Fortune, Chapek described a future where his company will take “digital storytelling and blend it with physical storytelling, like in a metaverse where it’s a three-dimensional canvas that gets painted.”

Similarly, in a memo to staff in February, the CEO doubled down on his convictions, describing the metaverse as “the next great storytelling frontier and the perfect place to pursue our strategic pillars of storytelling excellence, innovation, and audience focus. Teams across the company are exploring this new canvas, and I have been blown away by what I’ve seen.”

Timberland Teams Up With Epic Games on Metaverse Initiative

Since 2018, Timberland CONSTRUCT: 10061 has been hosting the best footwear creators and innovators from across the globe to push the frontiers of bootmaking. For the first time it started, the ongoing footwear experiment will be entering the metaverse.

Teaming up with Epic Games' Unreal Engine and CONCEPTKICKS, Timberland is taking its business to the virtual world. The footwear manufacturing company is debuting a one-of-a-kind design innovation experience in Fortnite. The partnership is calling on footwear enthusiasts and experts from across the world to enjoy an immersive playable experience in Fortnite, as well as explore the universe of design and innovation.

“For this project, we were really interested in capturing the design process and showing how the Metaboots came to life.”

There are five key elements of the multi-stakeholder partnership. First is a “Timberland Design Lab and Maker Space” in Fortnite, which will provide a rare glimpse into the company’s innovative design process. The virtual space on Fortnite is a copy of Timberland’s real-world innovation lab and maker space.

There is also a “Meta Design Workshop,” home to four notable Metaboots for players to try on, including a replica of the iconic yellow boot and three original boots inspired by custom outdoor biomes. The workshop is the result of a collaboration between Timberland’s Advanced Concepts & Energy team, CONCEPTKICKS, CONSTRUCT: 10061, and innovators from BeyondCreative.

Other aspects of the collaboration include an immersive gaming experience on a custom Fortnite island, as well as physical prototypes from a recent IRL workshop, accessible in AR through Sketchfab.

“Timberland was built on a foundation of footwear innovation; our partnership with Epic Games’ Unreal Engine allows us to explore new dimensions as we envision the future of bootmaking and boot culture,” said Drieke Leenknegt, chief marketing officer for Timberland. He added:

“We’ve brought the collaboration model into the metaverse by inviting innovators such as Daniel Bailey, Zixiong Wei and Aisha Kujk to co-create Metaboots with our own ACE designers, in Fortnite. At the same time, we’re inviting consumers into the world of design innovation within an amazing Fortnite experience. The possibilities to connect in the metaverse are endless.”

The CONSTRUCT: 10061 Fortnite experience was launched at Timberland’s flagship Orefici11 store during Milan Design Week. Guests had the opportunity of trying out physical prototypes and participating in real-time gameplay.

Meanwhile, the initiative to bring CONSTRUCT: 10061 into Fortnite was spearheaded by Metavision. “For this project, we were really interested in capturing the design process and showing how the Metaboots came to life,” said Luke Price, co-founder and creative director of Metavision. “It has been a great pleasure to collaborate with creators from different disciplines at BeyondCreative and CONSTRUCT, learn about each other’s styles and influences, and create some amazing things. Metavision is focused on finding new ways to engage with audiences and tell stories in the metaverse and it’s been fantastic to work with Timberland and partners who share this ethos.”

Payments giant Mastercard has launched a metaverse campaign in support of the LGTBQ community.

Pride Month is celebrated annually in June in honor of the 1969 Stonewall riots, and efforts to achieve equal justice and opportunity for lesbian, gay, bisexual, transgender and questioning (LGBTQ) Americans. Mastercard announced the launch of its “Your True Self is Priceless” campaign “designed to celebrate the power that comes from embracing and living as your authentic self.”

"We want to engage with people in different ways and give them experiences in these new spaces, from a diversity and inclusion point of view," said Raja Rajamannar, chief marketing and communications officer at Mastercard and its president of health care.

In addition to live Pride events, the Mastercard campaign will include two immersive metaverse experiences in Decentraland and Meta’s Horizon Worlds. Members of the LGBTQIA+ community are encouraged to write candid letters to their younger selves as they journey to embrace their true selves. These messages will then be collected across social media and used to “celebrate the positive power of truth and authenticity and will be part of a virtual, immersive exhibition in Meta’s Horizon Worlds, a gallery in Decentraland, and print, social and other mediums.”

In May, Decentraland opened a digital space for the LGTBQ community on its platform. The Metaverse Pride event will be hosted there, featuring curated content, a host of digital experiences, and other entertainment. Fashion brand Original Penguin, Singer Thalia, and HUG will all be part of a parade that started on June 11 and will be live until the end of the month.

In 1992, Neal Stephenson wrote a sci-fi novel titled Snow Crash, which made him the first person to coin the term “metaverse.” An excerpt from the book reads:

"On the back is gibberish explaining how he may be reached: a telephone number. A universal voice phone locator code. A P.O. box. His address on half a dozen electronic communication nets. And an address in the metaverse."

The renowned futurist, in his novel, described a virtual world that can be accessed via a worldwide fiber-optic network and VR headsets, with other concepts like virtual real estate, centralized control, and constant advertisements.

30 years later, the metaverse is now a reality and the so-called “father of the metaverse” is set to enter the space. Stephenson is teaming up with "cryptocurrency pioneer" Peter Vessenes to bring their very own metaverse-based project to life.

Dubbed LAMINA1, the project describes itself as a "new Layer 1 blockchain technology designed for the metaverse with Web3 principles in mind." And speaking of Web3 principles, LAMINA1 aspires to build “an open and expansive virtual universe” that is void of "existing structures of centralized ownership and inequality."

While Stephenson will serve as the project's chairman, Vessenes will function as the CEO. Stephenson will focus on “helping get artists and other value creators paid properly for their work, helping the environment [...] and seeing a truly open Metaverse get built,” said co-founder Vessenes. Describing his partner’s role further, he said:

“Neal brings his vision, wisdom, experience, and some core goals: helping get artists and other value creators paid properly for their work, helping the environment [...] and seeing a truly Open Metaverse get built instead of seeing the Metaverse vision co-opted by monopolies.”

Although full details about the project are yet to be revealed, Ethereum co-founder Joseph Lubin has been named as one of the early investors in the project.

In general, Stephenson never envisaged that his fictional imagination would one day become a reality. He shared some musings about the metaverse on Twitter on Thursday, predicting that the innovation will be for screens and not VR headsets.

“Thanks to games, billions of people are now comfortable navigating 3D environments on flat 2D screens. The UIs that they’ve mastered (e.g. WASD + mouse) are not what most science fiction writers would have predicted. But that’s how path dependency in tech works [...] We fluently navigate and interact with extremely rich 3D environments using keyboards that were designed for mechanical typewriters. It's steampunk made real. A Metaverse that left behind those users and the devs who built those experiences would be getting off on the wrong foot.”

While the action around the metaverse appears to be building up, the head of Microsoft's HoloLens VR group, Alex Kipman, is stepping down. Seattle-based GeekWire first uncovered the news in an internal memo on Tuesday night.

“Over the last several months, Alex Kipman and I have been talking about the team’s path going forward. We have mutually decided that this is the right time for him to leave the company to pursue other opportunities,” wrote Scott Guthrie, head of the Cloud & AI Group at Microsoft.

The news definitely comes as a surprise to many in the AR industry, given Kipman’s role in Microsoft’s immersive computing efforts since the launch of the HoloLens AR headset in 2015. But while it may appear like the exec is leaving to pursue something else, there are rumors that Kipman is taking a bow following allegations of inappropriate behavior in the metaverse.

Some employees claimed that Kipman watched a VR video of women in skimpy clothing having a pillow fight and 'frolicking' on a bed in front of them.

Crypto News
Crypto News, August 22: Australia Wants to Map Crypto Tokens
The Australian government is aiming for innovative crypto regulation. Meanwhile, FTX reports record growth, with 2021 revenue up 1,000% compared to 2020.
Por {{autor}}
1 month ago
2m
Crypto News
Weekly Roundup: What Happened in Play2Earn Games and NFTs This Week? [Sept. 17, 2021]
In this weekly roundup, CoinMarketCap takes a look at some of the most prominent Play-to-Earn and NFT events in the just concluded week, from tech behemoth Google's NFT and Web 3 partnership, to an...
Por {{autor}}
1 year ago
8m
Crypto News
South Korean Opposition Wants Crypto Tax Delay
The increasingly influential People Power Party would delay capital gains taxes from 2022 until 2023, and raise its starting point from about $2,100 to more than $40,000.
Por {{autor}}
11 months ago
2m
See all articles