It's Thanksgiving! 8 Crypto Things We're Thankful for!
Tabla de contenidos
1. A Country Has Made Bitcoin Legal Tender
2. NFTs Have Finally Gone Mainstream
3. New Trends Continue to Emerge
4. Awareness About Crypto Is Growing
5. We Have Choice and Financial Freedom
6. It's Never Been Easier to Learn About Crypto
7. Crypto Exchanges Are Improving All the Time
8. It's Only Just Beginning
Crypto News

2021 will go down in the history books as a seismic moment for the crypto industry. Here are eight things that are worth celebrating. 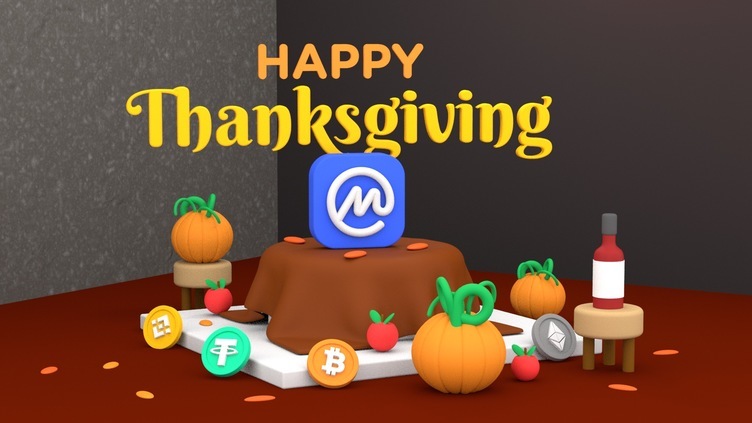 It's Thanksgiving! There's turkey and pumpkin pie to devour, family members to argue with, and plenty of American football to watch.

But of course, the holiday season also gives us an opportunity to take a break... and reflect on what we're thankful for.

And after the extraordinarily bullish 2021 for the crypto markets, there's no shortage of things to celebrate — including…

1. A Country Has Made Bitcoin Legal Tender

It may seem like *ages* ago, but El Salvador only officially made Bitcoin legal tender in September.

President Nayib Bukele's law, while radical, is historic — and now, a number of countries across Latin America are exploring whether they want to do the same.

Take a moment to reflect on how far El Salvador has come, and what it has achieved. Not only did it distribute $30 in Bitcoin to every citizen and quickly create the infrastructure needed for it to become part of the economy, but the Central American nation continues to innovate. Profits from its Bitcoin holdings are now being invested in schools and pet hospitals — and just this week, the president unveiled plans to build "Bitcoin City."

Back in 2017, when CryptoKitties crashed the Ethereum blockchain, NFTs were an abstract concept. What a difference four years makes.

Now, an endless array of top brands have embraced non-fungible tokens. They're distributed for free with burgers at fast-food chains, and handed out on T-shirts at basketball games.

Digital artists have become a global success overnight — making millions. Even 12-year-olds have managed to release collections that generate life-changing sums of money.

We're still scratching the surface of what NFTs are capable of, too. These assets have the potential to send shockwaves through the world of music, movies, and television. Indeed, a number of big entertainment brands — ViacomCBS among them — are building their very own marketplaces.

The crypto space never sleeps… and continues to innovate. The latest big buzzword is the metaverse. Facebook has been rebranded to Meta as Mark Zuckerberg shifts his company's focus to virtual reality. Nike and Microsoft are also diving in.

Projects like Decentraland and The Sandbox were championing the metaverse before it was cool — allowing people to buy plots of virtual land using crypto. Their early mover advantage means they'll have a big role as this nascent technology is increasingly used.

4. Awareness About Crypto Is Growing

Just a few short years ago, talking about Bitcoin around the dinner table at Thanksgiving would have attracted some blank stares from your family. But this time around, you shouldn't be surprised if your aunts and uncles are looking for tips on how to get involved.

Case in point: my grandmother now regularly asks me about how Bitcoin is performing… and my mom has also expressed an interest in investing. While some see this as a warning sign that the market is reaching a top, I see it as a big achievement for crypto. Everyone's hard work in building this industry from the ground up is now being rewarded with attention.

5. We Have Choice and Financial Freedom

In the world of traditional finance, the past few years have been punctuated by disappointingly low-interest rates. No matter where you look, it's been near impossible to get a decent return from fiat savings accounts.

Contrast that with Bitcoin. Last Thanksgiving, the world's biggest cryptocurrency was trading at about $18,700 — putting it on the brink of establishing a new all-time high and surpassing the $20,000 that was last seen in 2017. Fast forward to now, and BTC's price has more than tripled to $57,000.

Even the simple act of owning Bitcoin and leaving it untouched in a wallet would have been an astute financial decision over the past year. But there is an endless number of other ways you can make your BTC work for you, too. There's staking, crypto-specific savings accounts that offer generous returns, and cashback schemes that reward you for shopping with digital assets.

It's no wonder financial institutions are starting to look at crypto more seriously. Not only are banks beginning to offer custodial services, but companies like MicroStrategy and Tesla are opting to convert the cash they hold in reserve into Bitcoin. Wow.

6. It's Never Been Easier to Learn About Crypto

In the early days, it took a lot of determination to learn about Bitcoin. The inevitable first step was to read Satoshi Nakamoto's whitepaper. That's a steep learning curve — and the intricate technology behind digital assets was offputting for some.

These days, there's a wealth of information that crypto newcomers can depend upon to get up to speed. You've got resources like CoinMarketCap Alexandria, podcast, YouTube channel, daily news stories — all geared toward beginners. Apparently, some other crypto websites exist too.

Now, easy-to-understand research about how digital assets work is a couple of clicks away. With that comes higher levels of adoption.

7. Crypto Exchanges Are Improving All the Time

The process of buying and selling crypto used to be a clunky experience. Indeed, some of the earliest trading platforms were especially prone to hacks. Mt. Gox is a prime example of this — and was forced to close after 850,000 BTC were stolen in 2014. A fraction of these funds was later recovered, and only now, almost eight years later, are victims getting compensated.

A maturing market means things couldn't be any more different in 2021. Many crypto exchanges boast a clean design that's as simple and straightforward as conventional payment websites. A dizzying array of payment methods are also supported. Want to buy an altcoin using Apple Pay or PayPal? No problem. Got some banknotes sitting around? You can head to Walmart and use a Coinstar ATM.

If there's one *tiny* complaint, it's the fact that some crypto exchanges still end up suffering outages — especially when digital assets like Bitcoin suddenly shoot up in value or crash. This can be incredibly frustrating for those who are trying to capitalize on the action.

8. It's Only Just Beginning

Crypto newcomers regularly lament the fact that they are late to the space. But with new coins, projects, and sectors emerging all the time, the opposite is true.

Bitcoin is only 11 years old. Ethereum is just six years old. The decentralized finance space only meaningfully took off two years ago. Who knows: the next big cryptocurrency may yet to be invented, and a killer use case may still be a figment of someone's imagination.

Of course, there's no predicting where BTC, ETH, and other altcoins will be in a year's time — and any such forecasts should be taken with a big pinch of salt. But remember this: there were people who probably worried that they had bought Bitcoin's top at $50, $500, $5,000, and $50,000… and look where we are today.

Crypto News
2022 Looks Bullish for BTC: Bloomberg Intelligence
According to Mike McGlone, the fact that BTC and ETH have already experienced sharp corrections may give them a "relative advantage" over the stock market in 2022.
Por {{autor}}
6 months ago
3m
Crypto News
Bitcoin ETF Opens for Business in the U.S. Today
ProShares says its ETF will be known by the ticker BITO, and will make its debut on the New York Stock Exchange.
Por {{autor}}
8 months ago
2m
Crypto News
Top Crypto and NFT-Themed Restaurants You Need To Visit
Want to dine and pay with crypto or NFTs? Here are some of the best crypto-themed restaurants.
Por {{autor}}
2 months ago
12m
See all articles