Also today, you'll soon be able to browse, display and even trade non-fungible tokens directly through your TV. 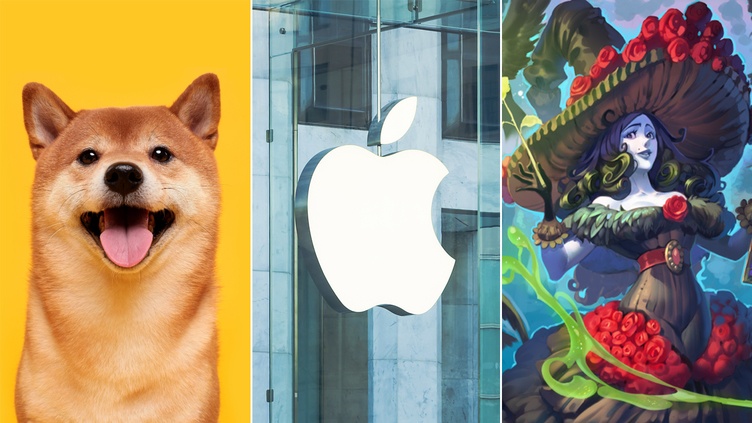 Shiba Inu has revealed that its upcoming metaverse will boast 100,000 plots of virtual land. Weirdly though, SHIB holders will need to make purchases using ETH. Plots have been split into four tiers. While Silver Fur is the cheapest at 0.2 ETH, a premium Diamond Teeth plot will set investors back 1 ETH. The Shiba Inu team say they want to use a "neutral coin" to ensure they don't need to dump their own tokens. Not everyone is impressed with the new offering — least of all Dogecoin creator Billy Markus. He tweeted: "How is making a random metaverse and selling fake land with Ethereum adding utility to the project? I mean whatever, if people want to give the devs even more money go ahead, but if I was a SHIB holder I would be annoyed."

The rumor mill is going into overdrive once again. Speculation is growing that Apple is on the brink of embracing cryptocurrencies as a payment method. It comes after a Bloomberg report revealed the tech giant is building its own infrastructure for processing transactions without an intermediary. Crypto investors have also been excited by a flurry of cryptic tweets from Strike's CEO Jack Mallers. The hoodie-wearing entrepreneur, who is due to make a big announcement at Bitcoin 2022 next week, has been randomly sharing old videos of Steve Jobs — and recently took a selfie while wearing an Apple sports cap. Does this mean he's just a fan of Apple… or could this be something more?

When the fantasy video game Storybook Brawl was first unveiled on Steam last summer, it had a flurry of positive reviews. "I've barely put it down," one player wrote. But all that has changed since it was announced the company behind Storybook Brawl, Good Luck Games, has been bought by FTX. Since the deal has emerged, the game has been bombarded with negative reviews on Steam by players who have a visceral hatred for crypto… and everything it stands for. Over the past 30 days, testimonials about Storybook Brawl have been "overwhelmingly negative" — with just 17% of 725 reviews saying something nice about the title. "The new NFT-centric business model will prevent me from ever coming back to this game," a player warned.

A poker player has been accused of stealing Bitcoin worth $500,000. Filippos Liakounakos has been charged with theft and using another person's identity to cause a financial loss. The victim had been approached by a business associate he knew on the Telegram messaging app, and they agreed to complete a crypto transaction. He transferred $500,000 in BTC and was assured that he would receive cash as compensation. But when the victim made contact the following day, the business associate had no idea about this transaction, and it became clear that his identity had been stolen by an impostor.

How you can get NFTs on your TV 📺

You'll soon be able to browse, display and even trade non-fungible tokens directly through your TV. Nifty Gateway and Samsung have entered into a partnership that means an NFT platform will be integrated into the electronics giant's 2022 range of QLED sets. While the prospect of putting NFTs on your TV may seem a little stupid at first, it actually makes sense — not least because many of us have a TV at the focal point of our living room, making it the best place to display digital artwork. Nifty Gateway says the partnership is a crucial milestone in its mission to bring crypto collectibles to the masses — and it means more than 6,000 pieces of artwork will be available to Samsung TV owners.
19 people liked this article

Bitcoin
Binance to Make Another Bid for Voyager Digital — And Unveils $1 Billion Crypto Recovery Fund
"As a leading player in crypto, we understand that we have a responsibility to lead the charge when it comes to protecting consumers and rebuilding the industry," CZ says.
Por Connor Sephton
2 days ago
3m
Bitcoin
Amazon Plans Eight-Episode Drama on FTX's Collapse
Given how it's a tale of billions of dollars vanishing overnight — with drugs and sex in a Bahamas penthouse thrown in — the show could end up being a gripping watch.
Por Connor Sephton
2 days ago
2m
Bitcoin
New York Times Criticized as It Confirms Sam Bankman-Fried Will Appear at DealBook Summit
The New York Times had already attracted the ire of crypto enthusiasts for what was regarded as an overly sympathetic interview with Bankman-Fried following FTX's collapse.
Por Connor Sephton
2 days ago
2m
See all articles