If just 2% of Instagram's users start owning NFTs, that would create a user base of 44 million — "significantly higher" than OpenSea's 1.4 million. 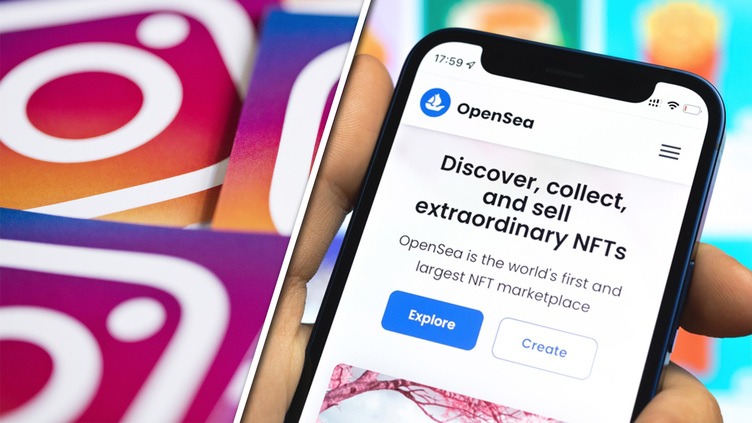 Mark Zuckerberg's photo-sharing app has confirmed that it plans to add crypto collectibles over the coming months.

Analysts believe this could attract millions of new consumers to the NFT space, and deliver billions of dollars in revenue for Instagram.

Deutsche Bank says Instagram is expected to have 2.2 billion monthly active users in 2023 — and based on its "conservative" base case that 2% of them would embrace digital assets, this would create an NFT user base of 44 million people on this social network alone.

This is "significantly higher" than the 1.4 million people who use OpenSea — fueling fears that the platform will lose a substantial chunk of market share.

Assuming that each of these Instagram users makes three NFT transactions per year, with a "conservative" average selling price of $250, this would result in trading volumes of $33 billion — streets ahead of OpenSea on $23 billion.

If Instagram's fees stood at 2.5%, this would result in $1.7 billion of yearly revenues — potentially rising to $8 billion "in an optimistic blue-sky scenario."

Deutsche Bank acknowledged that Meta, which owns Facebook and Instagram, has had mixed success when launching new use cases for its platform in the past, writing:

"Marketplace and Facebook Groups are clear success stories, while the user uptake of Facebook's dating product and Watch is less obvious."

Setting out the current state of the NFT market, Deutsche Bank said the market "is currently in hypergrowth mode" — and transaction volumes in 2021 were 250 times higher than the year before. Describing the market opportunity for new entrants as "very large," its analysts wrote:

"Bringing NFTs to Instagram's large audience has the potential to supercharge the overall market ('going mainstream.') We think Instagram will simplify the process of buying/selling NFTs, lowering the barriers to entry. Moreover, we think Insta's strong global brand recognition will lend itself to legitimize NFTs, which could serve to erode buying hesitancy across the company's broader audience."

Deutsche Bank has predicted that Instagram's arrival could also attract new artists to start creating NFTs — increasing the supply of digital assets available and creating a "flywheel effect" as the marketplace gets healthier.

Looking ahead, the report predicts that NFTs will become "the foundation of the metaverse," meaning Instagram's new marketplace will complement Zuckerberg's ambitions to make his recently renamed company the market leader in virtual worlds.

The report also noted Twitter has also embraced NFTs through a subscription service that enables users to add avatars as their profile pictures… and predicted that "Snap will soon follow the footsteps of Twitter in embracing NFTs on its platform in some form as well."

Little is known about Instagram's exact plans at present, but a number of major platforms are currently adding NFT functionality — including eBay. Sports brands and top Hollywood studios are also clamoring to monetize their archives by launching their own marketplaces, too.

Crypto News
CoinMarketCap News, August 2: Why Did Craig Wright Get So Little Compensation?
Also today — years after the ICO craze — jail sentences are starting to be handed down to criminals who conned investors out of millions.
Von Connor Sephton
2 months ago
5 Minuten
Crypto News
Cathie Wood's Ark Invest Dumps 1.41M Coinbase Shares
Her investment firm was, at one point, the third-biggest shareholder in the company — and the selloffs mark a big change in strategy for Wood.
Von Connor Sephton
2 months ago
1 Minuten
Crypto News
Maker Foundation Shutting Down as DeFi Protocol Goes Fully Decentralized
"MakerDAO has come full circle and is in good hands," Rune Christensen says.
Von Connor Sephton
1 year ago
2 Minuten
See all articles