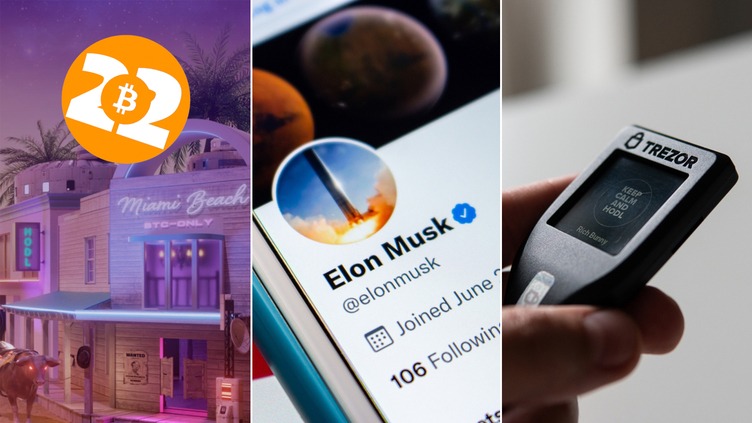 Hello from Miami! "The world's largest gathering of Bitcoiners" begins here on Wednesday. Bitcoin 2022 is almost certainly going to make international news. Last year's conference was dominated by Nayib Bukele's announcement that El Salvador planned to adopt BTC as legal tender. Bull market euphoria has been replaced with a cocktail of worries ahead of this year's four-day event. A star-studded list of speakers has been confirmed… and big surprises are inevitable. Check out our list of six things to expect at Bitcoin 2022 here. CoinMarketCap is in Miami all week and we'll be bringing you the latest news through our first-ever live blog. There will also be a new episode of the CoinMarketRecap podcast every day during the conference, featuring top guests and analysis.

Elon Musk has bought a 9.2% stake in Twitter after accusing the social network of stifling free speech. The surprise deal, revealed in a filing with the U.S. Securities and Exchange Commission, means that Musk is now Twitter's largest stakeholder… overtaking Jack Dorsey. In late March, the Tesla CEO said free speech is essential to a functioning democracy — and in a poll to his 80 million followers, he asked whether the social network "rigorously adheres to this principle." His stake is worth about $3 billion — and in pre-market trading ahead of Wall Street opening on Monday, Twitter's share price had surged by 21.8%. Musk's acquisition is a sign that he wants to have an influence on Twitter's future direction… does this mean more crypto-friendly features are on the horizon?

Scam emails pretending to be from Trezor have been sent over the weekend — with one recipient describing the message as "the best phishing attempt I have seen in the last few years." The hardware wallet manufacturer is urging its customers not to open any emails that are sent by noreply@trezor.us. Trezor said that mailing lists for an opt-in newsletter hosted on MailChimp appear to have been compromised. One person shared a screenshot of the fraudulent message, warning: "I am really lucky I don't have Trezor, because if I had, I would probably actually downloaded that update."

Liverpool FC has defended its decision to release a collection of non-fungible tokens — and says experimenting in the market is crucial to find out what fans want. However, a senior marketing executive at the football club has vowed that Anfield will not be releasing fan tokens, saying that "it isn't a premise that we support." LFC's NFTs went on sale last week — and 24 one-of-a-kind collectibles that depict players as superheroes are available. A more affordable range also retails at $75. Speaking to the Liverpool Echo's Bottom Line podcast, Drew Crisp said: "It is important that we try these things and see what works."

Five billion people could use the metaverse by 2030, according to a new Citigroup report. The bank's analysts also believe the metaverse economy could be worth up to $13 trillion in the years ahead. In an in-depth report, experts said the true size of the market will depend on whether these cutting-edge platforms can be accessed through PCs, game consoles and smartphones… and not just those who use virtual reality headsets. But there are challenges. Citi says the world's current internet infrastructure "is unsuitable for building a fully immersive content streaming metaverse environment" — and huge upgrades are needed.

Prosecutors in Turkey want 21 people suspected of being involved in a crypto exchange's collapse to be sentenced to up to 40,564 years each for their crimes. According to the DHA news agency, thousands of victims have been identified since Thodex went bust — and at current exchange rates, it's estimated they lost over $24m. The trading platform's CEO Faruk Fatih Özer — who has reportedly fled to Albania — was named in the indictment, along with his older brother and sister. All of the defendants have been charged with establishing and managing an organization for the purpose of committing a crime, as well as fraud and money laundering.
8 people liked this article