This week, CoinMarketCap Alexandria takes a look at some popular dApps to pick the best ones for our PC and Mac users. Read more! 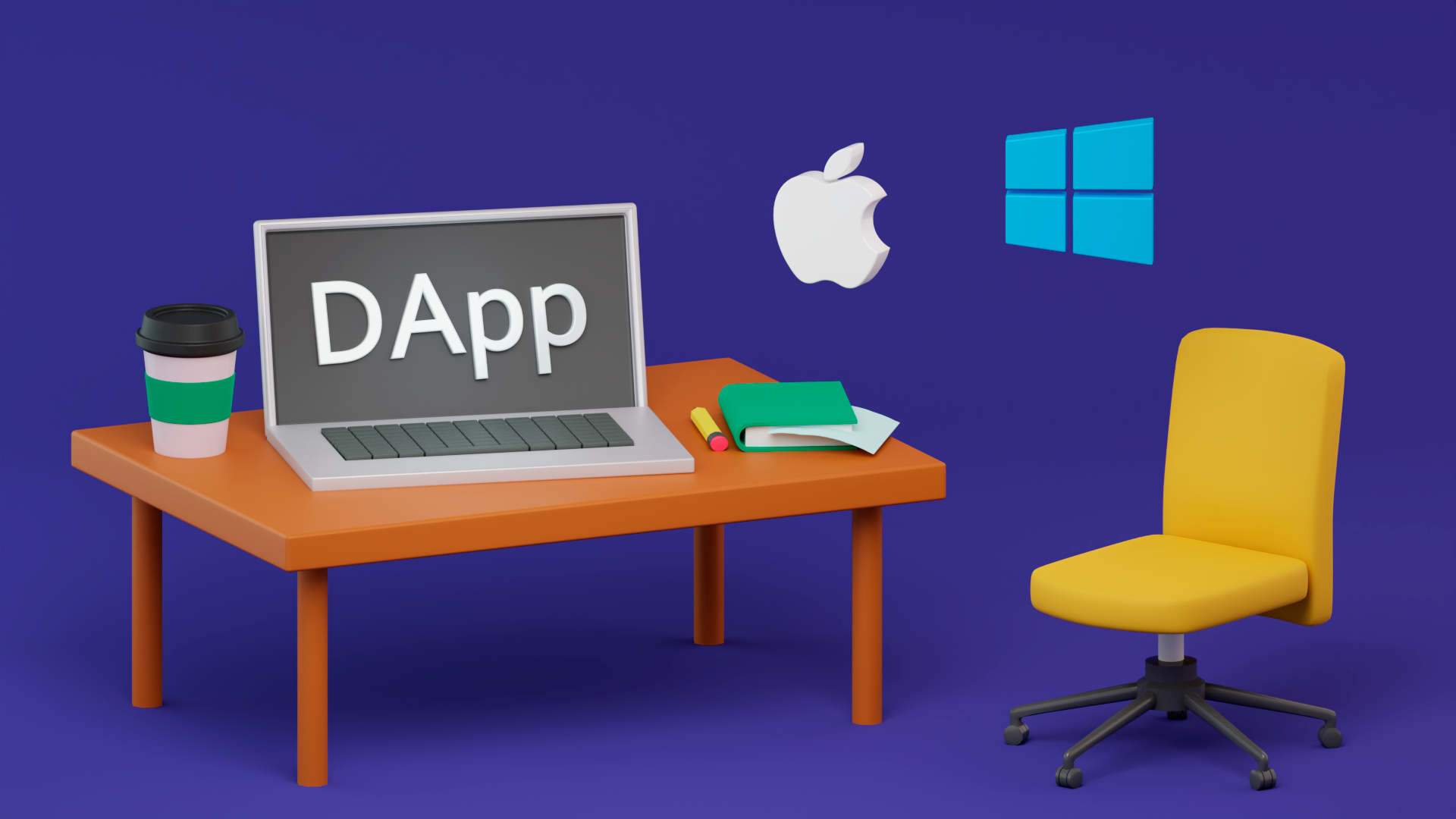 Thanks to an explosion in popularity of the DeFi and NFT sectors in recent years, there’s an absolute plethora of cool dApp choices when it comes to performing various actions in the crypto space. The boom in so-called “Ethereum Killer'' layer-1 networks like Solana, Binance Smart Chain and Avalanche has made it easier and more affordable than ever to buy, sell, trade, stake, play, earn and do with your crypto assets what you want. With thousands of decentralized apps currently swamping the crypto space and steep Ethereum gas prices making any smart contract interaction super pricy, we handpicked an eclectic few of the best alternatives for 2022.
Subscribe

PancakeSwap is a browser-based decentralized exchange (DEX) platform that facilitates the swapping of BEP-20 tokens at low prices and high speeds due to the efficiency of BNB Chain, according to the project. PancakeSwap is powered by an automated market maker (AMM) algorithm that leverages liquidity pools, which opens up yield farming opportunities for users who want to make money while supporting the platform.
Users can earn yield farming rewards by supplying assets to existing liquidity pools or by creating their own, which creates money markets with low slippage for DEX traders.
The DEX ecosystem has its own native utility token called CAKE, which can be staked to earn rewards.
With the Binance Bridge, holders of Ethereum-based tokens can wrap their digital assets to trade or provide liquidity to PancakeSwap, which recorded 2.89 million active users and $10.31 billion worth of volume in its smart contracts from mid-March to mid-April 2022.

OpenSea is a leading decentralized, peer-to-peer marketplace for NFTs that has helped create the digital collectible behemoth of an industry that we are seeing in 2022. OpenSea allows users to purchase, sell and trade digital assets of different types. OpenSea also supports the non-fungible token (NFT) creator economy, enabling users to mint their own collections, with features like lazy minting, NFT bundles, various types of auctions and the ability to create user-designed storefronts for specific types of NFTs. Minters are also given the ability to set their own fees.

OpenSea has a set of NFT offerings, such as music, digital artworks, domain names, utility assets, in-game items, etc., making it a platform aimed at introducing new players to the space.

OpenSea supports several blockchains, including Ethereum, Polygon, Klaytn and Solana. The marketplace recorded 363.96K active users and $2.33 billion in trading volume from mid-March to mid-April 2022. Despite a phishing breach, increasingly stiff competition from the likes of Rarible as well as faltering NFT prices in 2022, the NFT marketplace is still working to showcase NFT collections from all around the world.

AtomicHub is a web interface for a novel NFT standard developed by AtomicAssets. It’s aimed at making NFT creation more affordable and efficient for everyone, encouraging mass adoption.

AtomicHub features an NFT Explorer that allows users to list and browse through existing NFTs, a marketplace that enables users to buy and sell NFTs, and an NFT creation tool that can be deployed without the need of any developer knowledge.

The DApp operates primarily on the WAX blockchain, which was created specifically to support NFT adoption, but is also compatible with EOS.
AtomicAssets recorded 1 million active users and $3 million in total value in its smart contracts from mid-March to mid-April 2022.

Alien Worlds is a sci-fi play-to-earn (P2E) video game and metaverse that lets players explore multiple planets. According to the project, players can make money by trading resources they find in the game, which include NFT-based items like weapons, tools and minions, as well as mining Trilium (TLM), the utility token that powers the game’s virtual economy. The type of tool used and the availability of resources on a particular planet or land type determine the amount of TLM that can be mined.

TLM can be used to mint NFTs that can be used in the game or sold in exchanges for cash or crypto. The game currently has 18 levels and three different worlds, where players are rewarded with TLM for completing missions.

Alien Worlds operates on top of the Ethereum, WAX and BNB Chain networks, and it can run on most PC/Mac browsers. It recorded 884.92k active users and $29.54 million total incoming value in its smart contracts from mid-March to mid-April 2022.

Primelab is a Web3 platform that is launching several modular applications built on NEAR. Primelab’s ecosystem includes applications such as the following:
Primelab recorded 743.03k active users and $100.75k worth of volume in its smart contracts from mid-March to mid-April 2022.

Splinterlands is an NFT-based collectible card trading game where players can compete with each other in card duels, as well as purchase, trade and sell game cards on the platform’s built-in NFT marketplace. There are more than 500 NFT cards in the game, each with its own unique attributes and abilities, and they can be fused together to create new cards with even better stats. Players can earn rewards by fulfilling in-game objectives like participating in skill-based matches.
Splinterlands utilizes a game utility token called Dark Energy Crystals (DEC), which is awarded to players whenever they win tournaments and ranked battles or finish in-game quests.
Splinterlands runs on both the Hive and WAX blockchains. It has recorded 574.94k active users and $170.07k in its smart contracts from mid-March to mid-April 2022.

Upland is a blockchain-based metaverse game that allows users to purchase and trade virtual properties that represent real-world assets, mapping real addresses in places such as San Francisco, Brooklyn, Fresno, Bakersfield and Chicago. Players can own digital land and build properties to earn rewards in the form of UPX, the game’s economy token, which can be purchased with fiat and other cryptocurrencies, or sold in exchanges. Furthermore, UPX can also be used to buy assets in-game.

The project notes that players are incentivized to hold their Upland assets through the monthly UPX rewards generated, as well through the renting scheme that allows them to lend their assets to others for a fee.

Upland runs on both Mac/PC browsers and mobile devices, and it is powered by the EOS blockchain. It recorded 263.49k active users from mid-March to mid-April 2022.

Axie Marketplace is the official NFT marketplace of the leading P2E game, Axie Infinity, where users can purchase, sell, and trade in-game items like virtual land and Axies, which are NFT-based digital creatures used in the game. Despite OpenSea being the leading NFT marketplace, the Axie marketplace remains the go-to platform for users who are interested in starting their Axie Infinity journey thanks to its straightforward buying/selling process.
The Axie Marketplace operates on top of Ethereum and a sidechain called Ronin, which experienced a massive hack in March 2022. The marketplace recorded 256.19k active users and $147.83k in trading volume from mid-March to mid-April 2022.

Katana, also known as the Ronin DEX, is a decentralized exchange built to support trades within the Axie Infinity ecosystem. It is commonly used to swap Smooth Love Potion (SLP) and AXS for Wrapped Ethereum (WETH) and other tokens.

The platform aims to increase the liquidity of its ecosystem tokens and facilitate the breeding and trading of Axies by eliminating the reliance on third-party and external exchanges. Katana exclusively runs on the Ronin sidechain and only supports the Ronin wallet.

Magic Eden is a leading Solana-based NFT marketplace that allows users to sell, purchase and trade NFTs built on the Metaplex standard. The marketplace caters to mostly digital artworks, collectibles and metaverse/gaming assets.

Magic Eden also has a launchpad, which automates the process of launching NFTs, requiring project runners to upload the files while it takes care of minting, distribution, and everything else on the backend.

The NFT marketplace recorded 216.31k active users and $756.95 million in on-chain volume from mid-March to mid-April 2022.
This article contains links to third-party websites or other content for information purposes only (“Third-Party Sites”). The Third-Party Sites are not under the control of CoinMarketCap, and CoinMarketCap is not responsible for the content of any Third-Party Site, including without limitation any link contained in a Third-Party Site, or any changes or updates to a Third-Party Site. CoinMarketCap is providing these links to you only as a convenience, and the inclusion of any link does not imply endorsement, approval or recommendation by CoinMarketCap of the site or any association with its operators. This article is intended to be used and must be used for informational purposes only. It is important to do your own research and analysis before making any material decisions related to any of the products or services described. This article is not intended as, and shall not be construed as, financial advice. The views and opinions expressed in this article are the author’s [company’s] own and do not necessarily reflect those of CoinMarketCap. CoinMarketCap is not responsible for the success or authenticity of any project, we aim to act as a neutral informational resource for end-users.
25 people liked this article

Crypto Basics
Best Crypto Apps in Canada
In our latest guide to crypto in Canada, CoinMarketCap takes a look at some of the best crypto apps in Canada right now.
By Kevin Dwyer
1yr ago
5m
Crypto Basics
How Bitcoin Miners Operate
How exactly do computers mine bitcoin, and is it profitable? This article explains the process behind how the first cryptocurrency works.
By Andrey Sergeenkov
1yr ago
6m
Crypto Basics
How ICO Funding Temporarily Changed Entrepreneurship
You may have noticed that ICOs are not as popular as they were in 2017 — what happened, and why is the idea of an ICO still so important?
By Stuart Langridge
1yr ago
5m
See all articles