It was claimed that Beeple had launched an exclusive drop with the high-end fashion brand Louis Vuitton — with a dodgy link posted in the artist's Twitter bio. 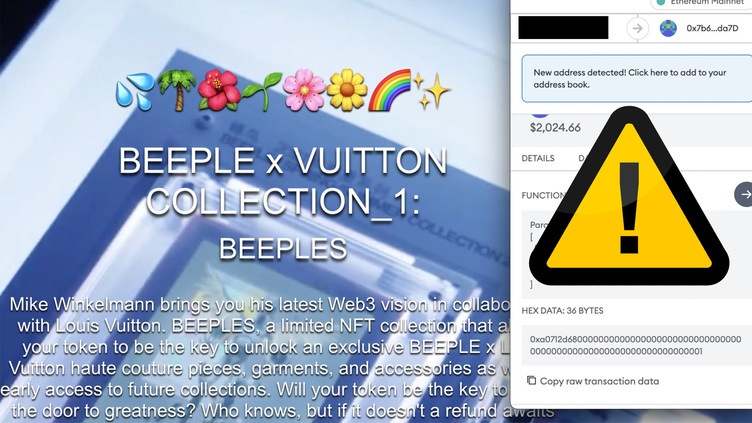 Beeple's official Twitter account was hacked over the weekend — and blockchain records suggest $440,000 in crypto has been stolen from unsuspecting followers.

The NFT artist, whose works have sold for tens of millions of dollars in recent years, was targeted by malicious actors who posted a link to a scam in his bio.

It was claimed that Beeple had launched an exclusive drop with the high-end fashion brand Louis Vuitton — and to confuse matters further, he had a starring role in its spring/summer 2019 collection.

Unfortunately though, it was all too good to be true — with cybersecurity researchers speedily alerting Twitter users to the risks.

Harry.eth, who works in security for the MetaMask wallet, warned crypto investors who clicked on the link and connected their wallet would end up initiating a smart contract that would take 1 ETH from their account.

To make matters worse, the scammers later posted another tweet that declared Beeple was releasing 200 new NFTs "from my collection behind the scenes" — and that the mint was completely free.

According to harry.eth, a whopping $438,000 was stolen across these two scams in the space of just five hours — a painful illustration of how dangerous it is for Twitter accounts to be compromised.

Beeple, whose real name is Mike Winkelmann, has now regained control of his Twitter account, quipping "that was a fun way to wake up."

He added that Gary Vaynerchuk's team had played an instrumental role in helping him to secure his profile as quickly as possible, adding:

"Stay safe out there, anything too good to be true IS A F****** SCAM. And as a side note, there will never be a SURPRISE MINT I mention one time in one place starting at 6am Sunday morning."

A number of his followers have confirmed that they ended up losing crypto in the scam — desperate to get their hands on an NFT without taking the time to check whether it was legitimate. One wrote:

"Sadly I was scammed by clicking too fast into the tweet… I know I was too stupid to believe in something like that but will there be any help for us? I can provide the transaction ID and all. It's all my life savings."

Some of those who fell victim described themselves as "veterans" in the space — and if someone who has invested in crypto for years can be susceptible, it proves no one should be complacent.

Not only did this break records for the most expensive NFT ever sold, but it also elevated him as one of the three most valuable living artists.

Crypto News
Brother and Sister Charged with $124M Crypto Fraud
John and JonAtina Barksdale are accused of selling Ormeus Coin via crypto trading platforms — and running a multi-level marketing business.
By Connor Sephton
5mo ago
2m
Crypto News
Mining in China Fell Dramatically Even Before Crypto Crackdown, Figures Show
Over the same period of time, the U.S. became the second-biggest producer of Bitcoin in the world.
By Connor Sephton
1yr ago
1m
Crypto News
Celsius Network 'Laying Off 150 People' as Lender Battles to Stay Afloat
It's been three weeks since Celsius Network announced it was pausing all withdrawals, swaps and transfers because of "extreme market conditions."
By Connor Sephton
1mo ago
2m
See all articles